Every Labor Day, Dragon Con brings in some friends and family from around the southeast. This year, we were happy to go to a new place with our friends from Nashville, Tory and Brooke. We hadn’t seen Brooke in a stupidly long time; she missed coming to town last year, and the last few times I’d gone to the Music City, she was either working or, in one case, too sick to be social. So we were particularly glad to see her. And Tory, who’s always a joy. And their friend Holly, who came to town with them. Holly was wearing a WKU shirt and I mentioned that they started their season big with a win over the Wildcats. Holly wasn’t entirely sure that she knew that WKU even have a football team. Tsk.

Anyway, we gave Brooke first dibs at what sort of dinner she’d like on Sunday, and she picked Mexican. My first several choices for near-downtown good Mexican were all misfires, as Bell Street Burritos, Bone Garden Cantina, and Taqueria del Sol are all closed on Sundays. I was just about to suggest that we go to someplace on Buford Highway, but then remembered this wouldn’t go down well with Marie. I would be picking up our friends from a downtown hotel and going to the restaurant, and Marie, who would be coming from Marietta, wouldn’t want to drive across the top end perimeter to BuHi. Then I remembered Verde Taqueria on Collier, which I’d driven past dozens of times and never stopped. Their parking lot is always full and they’re open on Sundays, so we headed there. 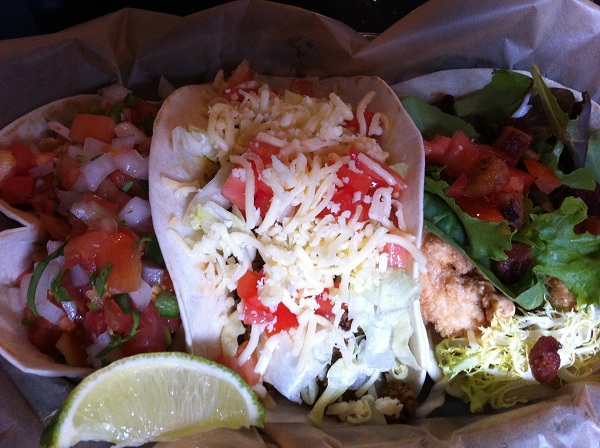 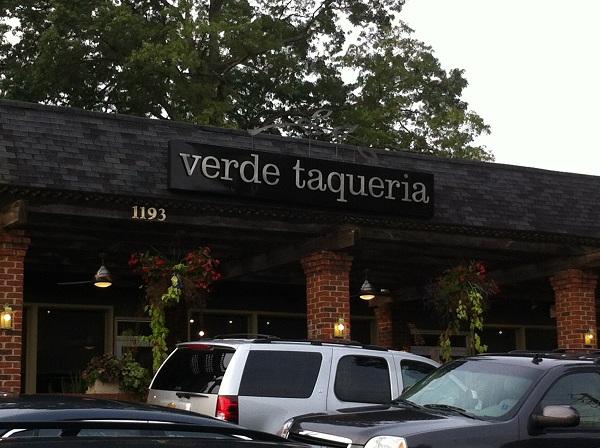 Verde offers a small menu of fusion tacos, priced between three and four dollars each and served in flour tortillas. Nothing on the menu is really surprising – buffalo chicken and pulled pork are apparently their most popular – except for the limited beer selection.

Everybody had a taco or three and everything was pretty good, but nothing really blazed with excitement either. The best thing that we all enjoyed was the thick and spicy table salsa for the chips. I’d imagine that the reason that this place has inspired so little buzz from hobbyists in the four years its been open – the first location, on Dresden, started up in 2009 – is that the tacos really serve more as bar food while the place fills up with people looking for drink specials. This location opened in early 2011 in the old Fox & Hounds space.

Since we were really most in the mood to catch up with our old friends and they wanted some baby-time, the meal didn’t matter as much as the company. But while nobody was displeased with the food, I absolutely believe that had Bone Garden been open, we’d have all had a lot more to talk about, like how darn great the meals in front of us were.

Other blog posts about Verde: