On the 30th of last month, Food Near Snellville racked up a big milestone: 500 Atlanta-area restaurants written up. So you know what I did that evening? I tweeted my congratulations to him, dropped off the girlchild at a football game, picked up Marie from work, and went out to meet Adam and Emily from Spatialdrift at our 500th Atlanta-area restaurant: So Kong Dong on Buford Highway.

This was not intentional, just a cosmic coincidence. In fact, I had no idea that we’d hit 500 until I started putting together the next few weeks of schedule. This always changes with us. Chapter # 800, last week, the one about Article 14? That was supposed to be a history of the Shrimp Boats chain; that’s been postponed to next month some darn time. Still, I couldn’t help but smile at the symmetry. FnS planned to celebrate the achievement by visiting a very well-known and popular place, Miller Union, and we just happened to end up at a joint I’d never heard of or noticed the same evening, both numbered 500.

You can credit Spatialdrift for the unheralded nature of our Big Meal. Marie and I enjoy tagging along to whatever will be the next place on their list (if you’re not reading them, you should know they are tackling every Buford Highway eatery, south to north, in roughly geographic order). They had planned to do Chicago Supermarket, but they only make their tacos for lunch and had already closed the grill. There’s a wings-n-philly place across the street that would technically be the next one, but we all knew that no good meal would come from there; that’s the sort of place our friends suffer stoically by themselves for their art. That left the quite awesome El Rey del Taco, which was actually the very first Buford Highway place on our blog, and I would not have minded at all just having supper there. (In case you Googled your way here, check back over the previous three posts. New content, this 30th of August, was not anything that we were lacking.) But then we spotted So Kong Dong tucked away in the corner of this little strip mall. Marie prefers Korean to Mexican, and this way we all got new blog content by trying a new place. So maybe everybody wins…? 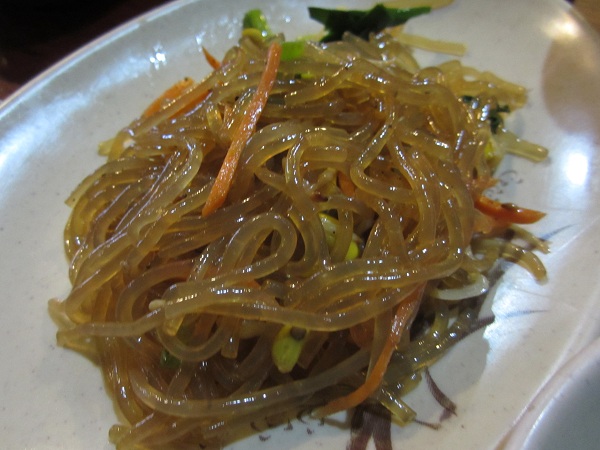 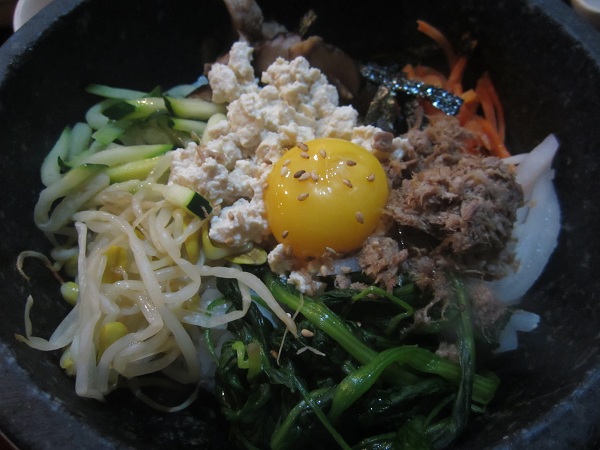 Well, here’s the deal: a mile and a half up the road, on the other side of I-285, there’s a place called Woo Nam Jeong / Stone Bowl House. It’s incredibly good and justifiably popular. So Kong Dong is where you try if there’s a really long wait for a table at Stone Bowl House and you can’t spare the time. It’s fine, it’s just good while Stone Bowl is great. They’ve been open for about ten years, they’ve got these cute “call” buttons at most of the tables so you don’t have to wave for a server – every time that I see those anywhere, not that I do with any frequency, I’m reminded of the Round The Corner burger place at Akers Mill – and the service is provided with a smile.

Adam and Emily ordered the galbi (spare ribs), spicy pork bulgogi, and a beef seafood tofu soup. Unfortunately, different servers brought different things to the table in different orders. Among the banchan that was placed between Marie and me, there was a raw egg, which I assumed I’d be cracking into my bibimbap, and promptly forgot about it. Then another server brought out Emily’s boiling soup, and it honestly didn’t occur to anybody that the egg nearest the baby was intended for the soup on the other end of the table until her soup had cooled somewhat. Blast. 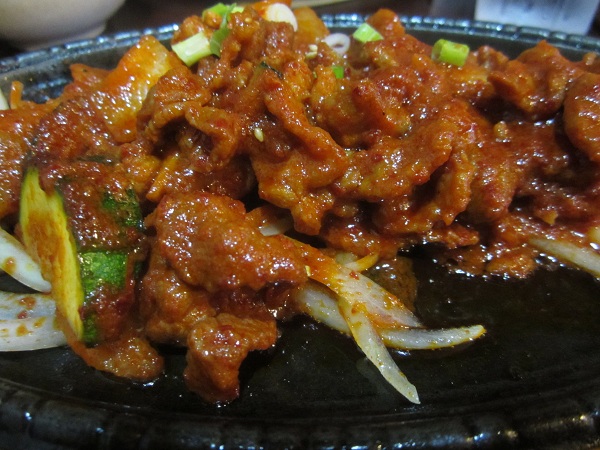 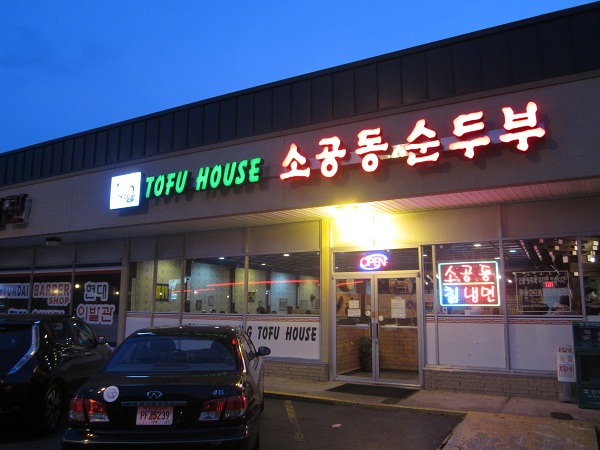 Marie also had the spicy pork bulgogi, and it was really good. Everybody was very pleased with that dish. I didn’t think that I was going to eat very much, after the afternoon’s gluttony, but I had the stone bowl bibimbap – something about it flatly struck me as not being as full of flavor as Woo Nam Jeong’s – and munched away at that while mostly ignoring the banchan, which seemed like one bland bowl after another. They didn’t give us anything that stood out, unlike the banchan at Hae Woon Dae or Woo Nam Jeong. The exception was the jap chae glass noodles over veggies. These were pretty good and, on an emptier stomach, I’d have had more than just a sample.

I was actually more than a little pleased when Marie pronounced her bulgogi as being far too spicy and we traded dishes. She liked the bibimbap more than I did, and despite eating quite a good deal of pork in the western ‘burbs earlier that day, I was happy to finish this off for her.

Marie didn’t have a long time to enjoy the bibimbap. I didn’t pack a sippy cup for the toddler, and so he was drinking water from a little porcelain teacup instead. With all the grace and etiquette of a freshman with his first fake ID, when he finished, he was finished, and shoved his teacup over, deliberately spilling water all over the table, and bellowed “Outside! Outside!” Sometimes, this kid’s just no good. But he still got a little strawberry cake out of the deal. 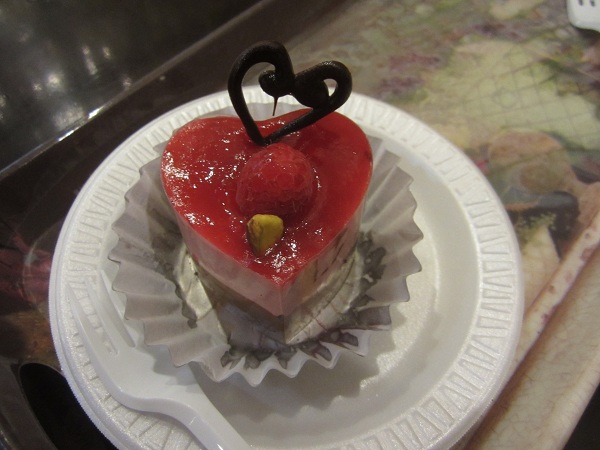 Yes, the toddler was being a wild child and not behaving, but we decamped to Mozart Bakery across the street, hoping that a change of scenery would calm him down. We enjoyed some baked goods and conversations – well, completely and totally full by this point, I enjoyed playing lifeguard and conversations – and eventually he had completely enough and didn’t want to eat anymore, just to fill his diaper and yell a lot. He sure was more predictable, and easy to manage, when he just lay down in a baby carrier with a bottle and went to sleep.

(Readers! If you are enjoying our posts about the restaurants on Buford Highway, while also thinking that documentation of this important corridor would look even better in the hands of a really good photographer, I encourage you to check out I Can Almost See it from Here, a project by Forest McMullin. If you enjoy the work by Spatialdrift, Eat Buford Highway, and us, then you are certain to appreciate what he’s doing, so go have a look!)

Other blog posts about So Kong Dong: