So back in the spring, I went to Carrollton with my friends Matt and Kelley, and noticed several promising places to eat within the city limits. One of them was called Jones Bar-B-Que, but when I looked for it on Urbanspoon a little later, I found a place with a similar name at a different address. This was going to prove to be confusing.

Now, if I’ve got it right, the original Jones Bar-B-Que was opened by Jack Jones in 1981 just south of downtown in an old Kentucky Fried Chicken building. In 1996-97, Jones moved out of this building and away to the nearby town of Temple, just north of I-20. When Jones left the building, Billy Bob’s Bar-B-Q moved in right behind him. Bob Green and his son Billy are still at this location today, serving up some awesome food.

In 2008, a totally unrelated Jones opened a store in Carrollton called Jones BBQ Outpost. It is on N. Park Street, about two miles north of Billy Bob’s, in a very small trailer with two tables. Most of their business is carry-out. I found the pork and stew to be bland and not really interesting, and the service unwelcoming. And so with that, let’s move on. 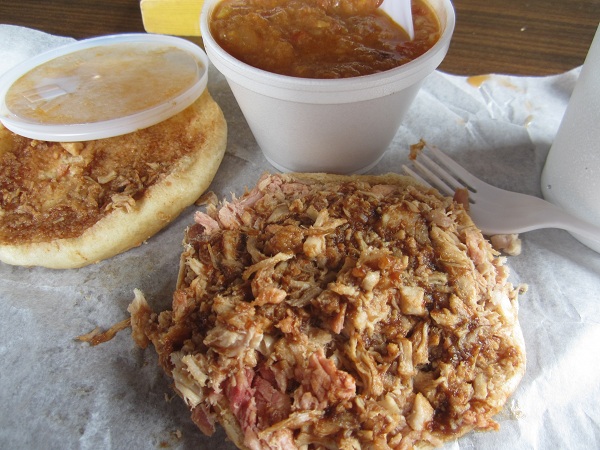 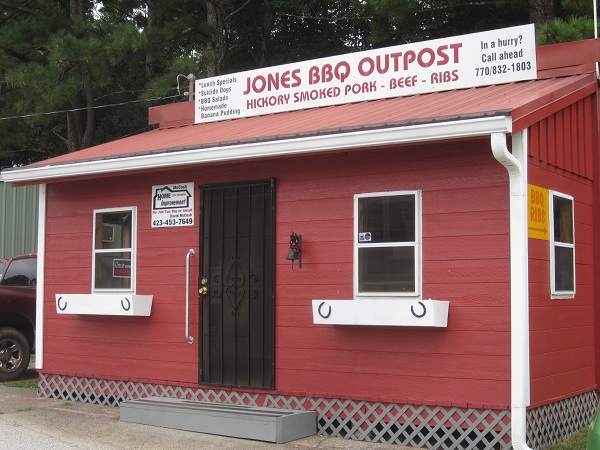 The Outpost was my third meal of the day, and so I took an eating break to do a little research at the Carroll County Library – has anybody else noticed how unbelievably useful old city directories are for this hobby of ours? – and walked around the block for half an hour to get some exercise. Then I went to get some papers notarized and, two hours later, I was ready to tackle the rest of the Jones story.

So I drove back the way I came and stopped at Jones Bar-B-Que. Now owned by David and Linda Hudgins – I fear that my server was not versed in her employer’s history and could tell me nothing – the business made a return to Carrollton after sixteen years in Temple about one year ago. I believe that the Temple location is still open and this is their second store.

The location on Bankhead Highway near Lake Carroll has been home to many restaurants over the years. Many. Googling the address brings up a whole pile: the popular Little Hawaiian, now located downtown, was once here, as was a Pizza Inn, Anchovi’s Pizza, the Copacabana Steakhouse, and South Beach Grill and Rotisserie. In January 2012, Blaine’s Restaurant moved in, but unfortunately the business failed in only eight months. Jones Bar-B-Que is the latest tenant. I sincerely hope that they can break this building’s curse! 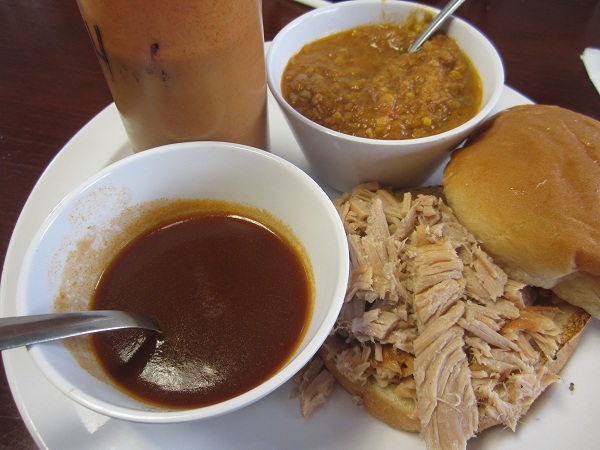 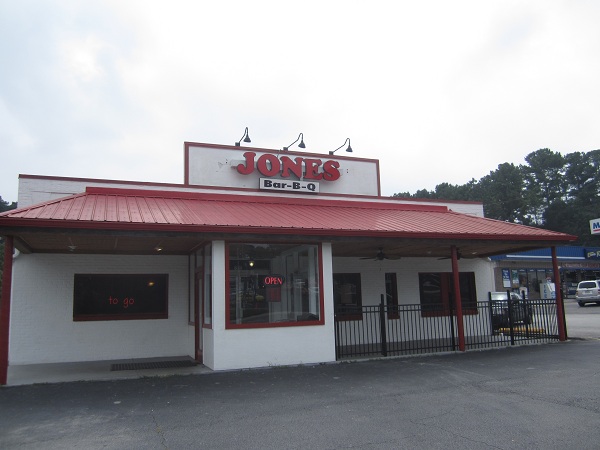 I was pleased to learn that Jones is yet another restaurant in the western suburbs to offer both Hudson’s-style sauce and the accompanying hot mustard and cayenne sauce. The pork tastes a little different from the other restaurants in this category. It is drier than what you’ll find at Hudson’s or Wallace’s places, and has the appearance of being sliced and then chopped, but I imagine that once upon a time, Jack Jones was paying careful attention to how those icons of the region’s barbecue cooked their meat and mixed their sauces. It was a good meal, but I was honestly not quite as wowed by it as I was Billy Bob’s several months earlier.

The remaining three restaurants of the day, as I returned to GA-61, were covered in the previous two chapters. I left two behind in Carrollton – J-Bo’s and Sam’s Memphis Blues House – for either another day or for another barbecue blogger to document. Then again, I may have to drive to Temple to check out that first Jones place. Well, three in a day’s a lot more manageable than seven…