It takes about nine hours to get to Memphis from Atlanta if you take a leisurely detour in Oxford along with three or four baby relaxation stops. Eventually, we found our hotel, which was nowhere near anyplace we wanted to be, or where Marie’s sister lives. The Memphis in May shindig, which seems to be embraced by at least half the locals, encompasses four weekends of festivals, food and fun. The first weekend of the month is the Beale Street Music Festival, which, unlike some that we enjoy like AthFest or Bele Chere, charges a heady admission price, thus keeping us away from the center of Memphis tourism, and also banishing us to the first reasonably-priced hotel in the area, just outside the I-240 perimeter on the road to Nashville.

The only good news about the chaos is that the Grizzlies were in Los Angeles; having the downtown area besieged by NBA fans on top of the festival really would have been a headache. As it was, festival parking was already criminal. We had to pay $15 a car to park in the vacant lot next door to Gus’s, which is several blocks from the action, and the size of the group necessitated three separate cars. The four of us went with Marie’s mom and her brother and sister, and one of her sister’s roommates, Ruby, and her boyfriend, Mike. If we could do it again, we probably should have gone to the other location of Gus’s, over on Mt. Moriah across from Gibson’s Donuts, about which more in a future chapter. At least we wouldn’t have had to shell out a combined $45 to park there.

This place is packed. It is as legendary for its wait as Pancake Pantry in Nashville and Schwartz’s in Montreal. Our waitress told us that it is, regularly, “fifty in, fifty out.” Like those places, the wait is justified. I had the best chicken tenders that I’ve ever had here. Yes, that’s right. Me, the big know-it-all traveling roadfooder, I went to Gus’s and had chicken tenders. 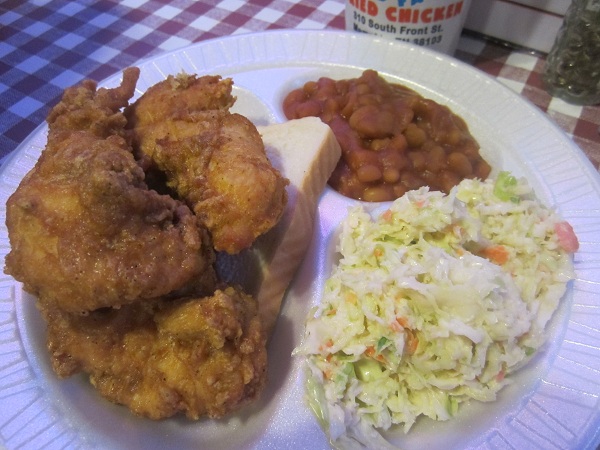 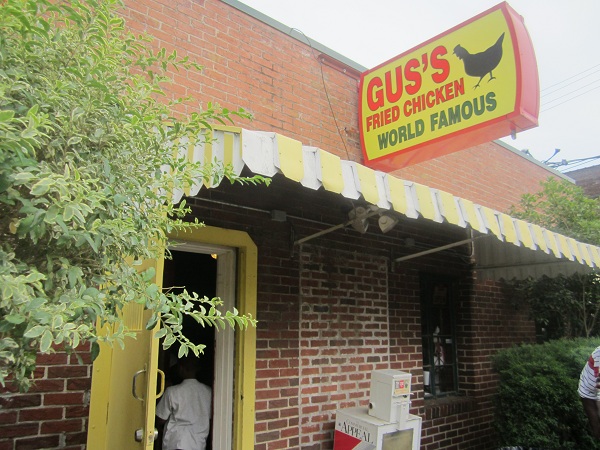 The reason that I ordered tenders is this: my daughter is a teenager, and teenage girls will occasionally have friction with their fathers. Not trusting that the next day’s plans would accommodate her desires much – she would be proved very wrong – she was making for less-than-ideal company. As a show of good faith, I just told our server that I would have whatever my daughter had. She appreciated the gesture.

Then I had a bite of Marie’s dark meat chicken and wept silently. Don’t get me wrong; you’ve never had a chicken tender as good as the ones that I had, but I couldn’t sleep that night, staring at the ceiling for long hours remembering that bite of Marie’s meal. Damnation.

This is not, as you might have guessed, a place for people in a hurry. The wait for a table was nearly an hour; the wait for our meals, during which time the Grizzlies failed, by a single point, in their comeback attempt against the Clippers and the crowd gave a sympathetic groan, was a good thirty minutes. Baskets of fried green tomatoes helped pass the time. The best distraction, however, was the excellent birthday gift that Marie’s mother gave the baby. It was one of those magnetic drawing/doodle boards with the slide eraser, and we entertained ourselves coming up with bizarre “what is this” games. At one point, Mike blackened the entire screen. The “answer,” of course, was “ninjas.”

I choose to focus on the doodle toy over the food, as I think that, in time, it will hurt a little less. The beans were terrific, the tenders were flawless, but both paled so far in comparison to that bite of drumstick that I would rather remember Gus’s as the place with the doodle toy than the place where I missed out.

Other blog posts about Gus’s: