Road trip! For the baby’s first birthday, we went back to Memphis to visit Marie’s sister. Her brother and her mother also made their way to town, and we had a good three days of family time. We ate a little bit, too, and had a very good meal on the way to town at Ajax Diner in Oxford. Since finances and the recent expansion of the SEC has made it a little unrealistic to plan to actually visit all of the distant SEC towns like I wanted, we have mostly tabled our plan to stop by each of them, but Marie indulged me into making a detour through Oxford, the home of Ole Miss, to get lunch here on the way. I was torn between Ajax or Taylor Grocery, and finally selected Ajax because it is located right on the courthouse square, allowing us to do some leg-stretching and a little bit of shopping before getting back on the road, and driving through the lovely Ole Miss campus on our way to I-55.

Taylor would have been the more obvious choice for us. It’s a much older place, extremely popular with both the current students and alumni, and is featured over at Roadfood.com, but this time out, Ajax was the destination and I’m glad we picked it. It allowed us to see this extremely lovely town square – Oxford really wants to be New Orleans when it grows up – and to browse at Square Books, a thunderously good independent bookstore that has grown so large that it operates two satellite stores within a quick walk. Plus, the food was terrific. 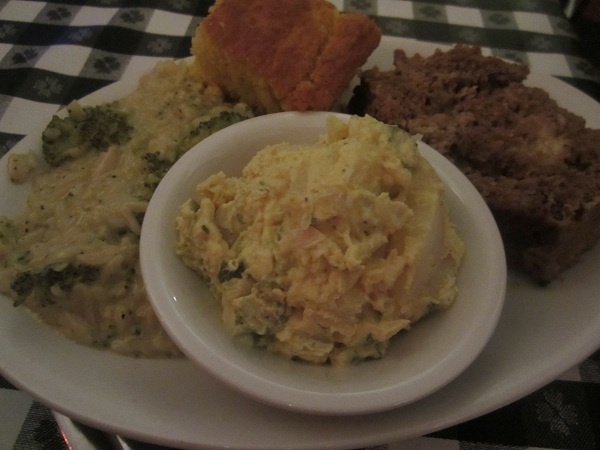 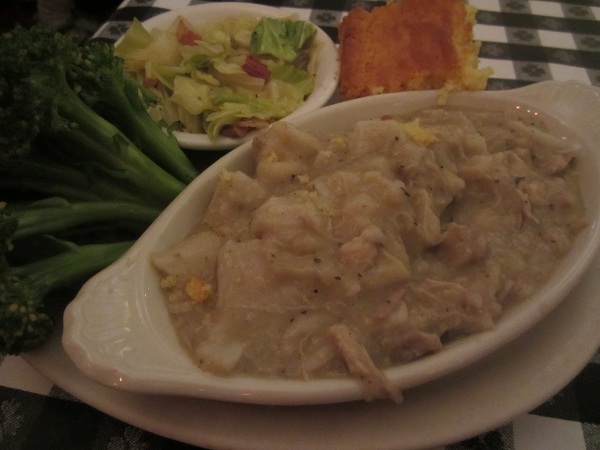 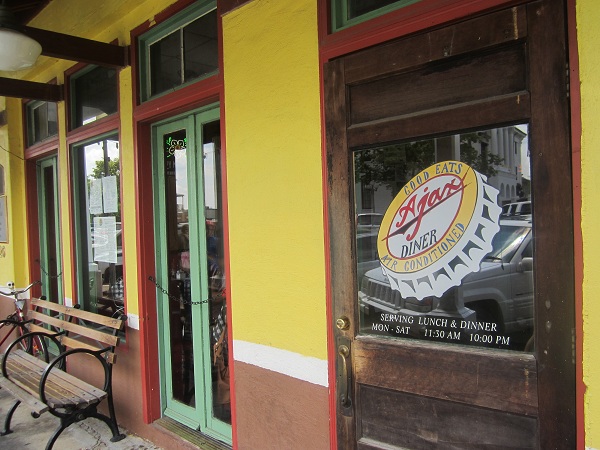 We arrived before their 11.30 opening time and joined a long line of hungry locals. This line might have been longer than normal because LSU was in town for a three-game series, bringing in lots of Tigers fans. LSU had won the Friday evening starter 4-3 in thirteen innings; the game was on the tongues of many of our fellow diners. It is possible that Ole Miss fans might even take their sports more seriously than those at any other SEC school; the speed limit everywhere around campus is 18, in tribute to Archie Manning’s cherished, retired, number. Rebels and Tigers alike studiously ignored my Bulldog red; even as Marie and I held the sweaty, wet baby between us and executed a spectacular midair diaper change while waiting for the diner to open, we were not as important as discussing that amazing ball game.

As my daughter rejoined us, negotiations opened. She and Marie each wanted chicken and dumplings, but we all wanted to sample different things. Eventually, diplomacy won out, and Marie ordered her second choice, the meat loaf, but got first pick of sides. Ajax has a good list of sandwiches, but the plate lunches are where they excel. Everything was really terrific and tasty. Marie had brocolli and rice casserole with potato salad, and our daughter had an order of broccoli with cole slaw. The broccoli here is a meal in itself: gigantic stalks that require a good bit of work with a knife and fork.

I thought it would be a shame to not visit Oxford and not have some catfish, so I had a po-boy with steak fries. Earlier this month, I wrote about two new Creole-styled places in the suburbs of Atlanta, and how each of them has such wonderful French bread, brought in weekly from a New Orleans bakery. I had to comment that it was somewhat baffling to be eating a po-boy in a town a great deal closer to New Orleans than Atlanta, and which, architecturally, looks as much like that city as the law will allow, and yet be made with bargain-basement sub rolls from the delivery truck. Catfish this good should never be served on bread so ordinary.

Bread aside, we were very pleased with our visit and left a really good town behind. We were not there for long, but between the meal, the lovely buildings, the bookstore, and all the friendly people, Oxford impressed me as being among the best college towns that we’ve visited. There looks to be a lot to do and see, and plenty of other good places to eat. It is certainly worth another, longer, visit, and preferably one where we can spend a few hours shopping for books.

Other blog posts about Ajax Diner: