Wrapping up my recent trips to the eastern side of Howell Mill Road and the neighborhoods there, I stopped by Tom’s Folly after I noticed the restaurant, which is set up in an old bank building, and found the name charming. I didn’t know anything about the place when I opened the door, although my heart sank as I saw the “only 18 and over” sign, stepped in, nearly choked to death from the smell of old cigarettes, and made my way back outside to the front patio.

This proved to be one of the best little random, unplanned stops that I’ve made at any restaurant in Atlanta for a few months. I chuckled over the little slogan on the sign out front that reads “no atmosphere, no attitude.” I think that means that there’s no cooler-than-thou sense of who can be the hippest or the trendiest, but there actually is an atmosphere of very welcoming and friendly people here, and one of the most positive attitudes of any staff in the city. The burger, which was a mix of beef and Italian sausage, and house-cut fries were solid, if not knockout, and the overall sense is a place for a simple, neighborhood comfort bar and grill. I was really reminded of Roxx Tavern over on Cheshire Bridge, and think that any of that fine restaurant’s many fans would enjoy this place a lot as well. 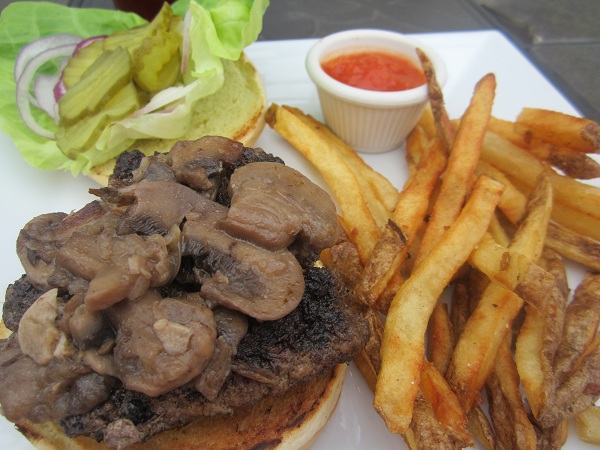 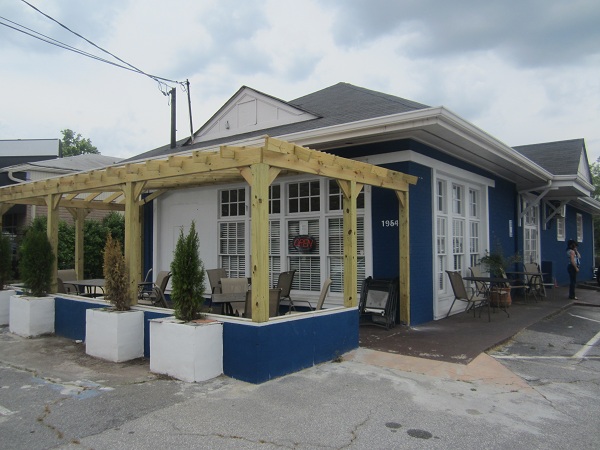 My server told me that the restaurant is called Tom’s Folly because it represents the owner, Tom Richardson’s, re-entry into the restaurant business after several years away from it. He’s brought with him a number of very interesting menu choices, including chicken liver pâté on toast, and house-cured salmon.

Another neat plus is the addition of a homemade ketchup along with the fries. I squirted a little Heinz on the side of my plate, as I do, before it really registered what my server had brought me. This was a very neat idea, and pretty tasty, too. For a folly, Tom has packed his place full of good notions. Apart from the “allowing smoking” one, that is. Afraid that’ll keep me away until another mild day to enjoy the outside.

This will be the last Atlanta-area chapter for a few weeks. Marie and the kids and I enjoyed a great visit with family in Memphis on the 5th, and for the next two weeks, the blog will be reporting on that road trip.

Other blog posts about Tom’s Folly:

(Update, 6/27/12) Perhaps there was more of a folly in Tom’s idea than I thought! Sadly, this place closed just a month after this chapter went up. Now, I’ve told y’all… you’re supposed to go visit the restaurants that are featured here!