One of the really nice things about taking a road trip like this one is that you can occasionally knock a longtime favorite from your wish list. So it was with Camp Washington, which many people in the know have claimed is the very best of Cincinnati’s chili parlors.

We have not been up Cincinnati-way since starting the blog, but Marie and I are slightly familiar with at least the chain versions of Cincy chili, and I greatly enjoyed the since-closed America’s Top Dog’s take on it whenever we could visit. As many of you know, this chili is a kissing cousin to Texas-style chili. It is a much thinner meat sauce, sweeter, and, occasionally, with a nice, red peppery kick, and is typically served over spaghetti noodles. With beans, onions, and a hilarious mountain of shredded cheddar cheese, it’s called a five-way.

I had eaten at a couple of locations of the well-known chains Skyline and Gold Star in my previous trips this direction. Marie was with me in 2008 when we stopped by a Gold Star in Lexington and she decided she didn’t enjoy it. Well, she wasn’t here this time, so we fed the baby some oyster crackers, noodles and cheese, my daughter dug into two cheese coneys and I had a five-way that was completely wonderful. 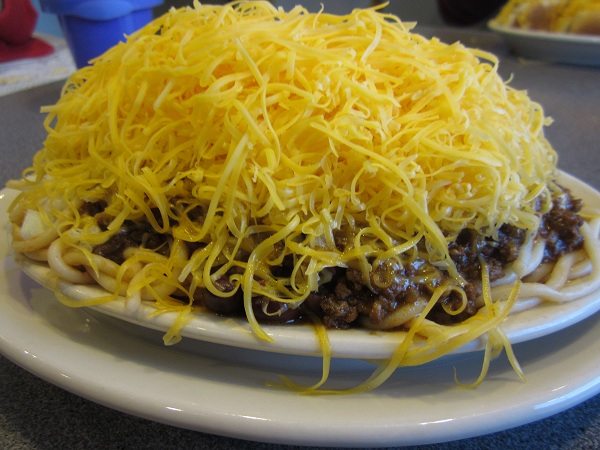 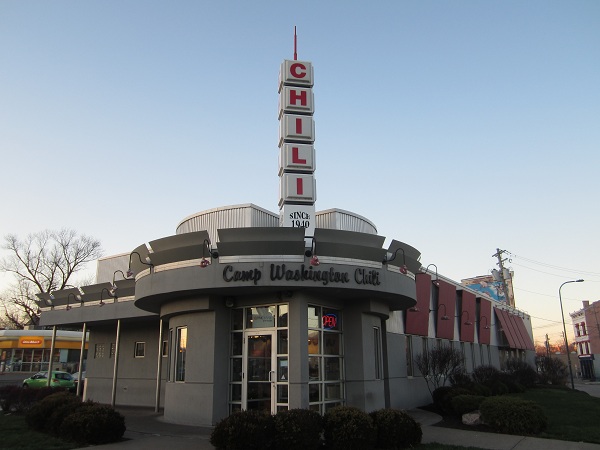 Camp Washington was opened in 1940 by two Greek immigrants, Steve Andon and Fred Armbus. They were not the first to sell this recipe – Empress Chili predates it by almost two decades – but their restaurant immediately became one of the best-known chili joints in town. Eleven years later, Andon’s nephew, John Johnson, arrived in America, and, in 1977, he bought the business. He’s still there, usually six days a week, prepping the sixty-odd gallons of chili that the restaurant serves every day.

In the 1980s, CBS News declared Camp Washington’s as the best chili in the country, and the restaurant earned an early James Beard Award for best regional cooking, but these couldn’t save the beloved dive from the city’s plan to widen Hopple Street, a plan that had actually been in the works since 1976. Johnson fought City Hall longer than just about anybody, keeping the bulldozers at bay for 24 years! The business was closed for a couple of weeks in the summer of 2000 as the building was demolished. They moved into a brand new building constructed just for them next door. Photos of the original place reveal an ugly but wonderful brick eyesore of a place.

The new home – “new” after a dozen years – is, honestly, reminiscent of the layout used by Skyline. It’s a spacious diner and, like the Parkette, which we’d visited a couple of hours before, evokes the 1950s without shoving fake retro nostalgia down guests’ throats. No, the nostalgia here is for Camp Washington’s own past. The walls are lined with framed stories about their past, and they might just have the largest collection of them of any restaurant I’ve ever seen. You could spend a good two hours just standing around reading.

As for the chili, well, it is fantastic. I thought that it was spicier than any other that I’ve tried. It wasn’t tough, but the burn was present and consistent. If the road had taken us to live and work in Dayton, then I honestly would enjoy this region’s chili as often as I do barbecue down here. I love the taste of it, and Camp Washington’s, after almost five years waiting to try it, proved to be the most satisfying of any, by a nose. We had some more a couple of days later that was also really good.

On the way out to pay, I noticed a rack of Husman’s potato chips. I wasn’t familiar with the brand and said so to the cashier. She told me that there were lots of chips in Ohio that they don’t sell in the south, and that I really needed to buy some Grippo’s barbecue-flavored while we were there. She said that those were the best chips in the world. The following day, when we stopped for gas in Dayton, I picked up a one ounce bag, and oh sweet wonderful heaven, John, if you’re reading this, please identify that employee and give her a big hug from me. We came home with two half-pound bags of the things. Grippo’s barbecue chips are indeed the best in the world.

Naturally, Marie shrugged and said that they were okay.

Other blog posts about Camp Washington: