In the previous chapter, I explained that when the children and I made our first stop on the trip to Dayton to join Marie, my daughter ate very lightly. This is because we watched the segment of Diners, Drive-Ins and Dives where Guy Fieri visited Lexington’s Parkette Drive In and she decided that she really wanted to indulge here. Regular readers may recall that she has, in her mercurial teenage way, gone back and forth over whether she actually enjoys fried chicken or not. The segment sold her on the idea.

The Parkette is very much a local icon. It was opened in 1951 by Joe Smiley, who identified a long tract of dirt roads surrounding Lexington and correctly guessed that having a hit restaurant out this direction would get the municipal services to follow him. Unfortunately, once it was paved, New Circle Road became, in time, the epitome of graceless late 1960s commercial sprawl, and, locked in step with the decline of these urban arteries, the Parkette slowly stumbled, the quality of its food and cleanliness deteriorating over time.

Smiley finally closed the business in 2003. There was a short-lived second attempt by a group of investors, but it too failed, and was bought again in 2008 by Jeff and Randy Kaplan, who brought along their restaurant experience from owning several Subway franchises in the area. Even they stumbled as they looked for the right way to keep this old landmark alive. That way, as it turned out, was straight from Smiley’s original playbook. 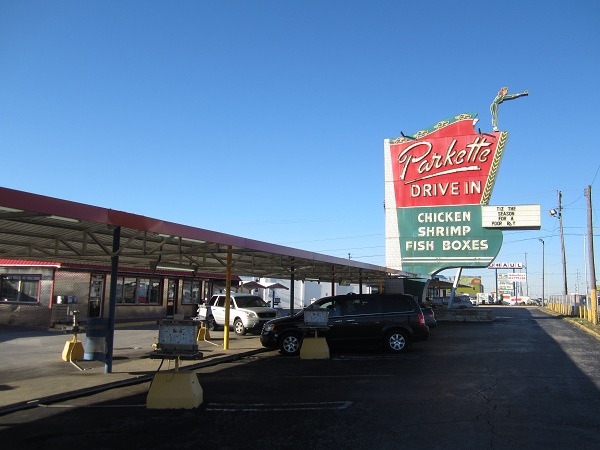 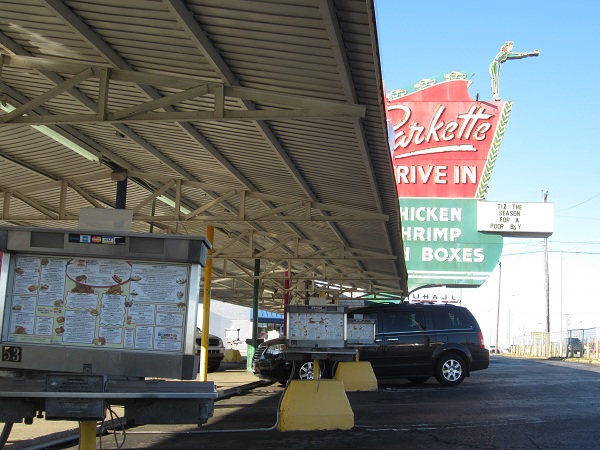 In many previous chapters, we have expressed some disapproval over what we call “fake nostalgia.” To be more clear, we mean that if you want a restaurant to look like something from the 1950s, then do it right. Self-consciously retro dressings, like the much-hated posters of Marilyn Monroe and James Dean sharing a milkshake, don’t evoke the 1950s. They evoke the 1980s, and our culture’s occasional, half-hearted attempts to appeal to some nebulous good ole days.

In lesser hands, the Parkette could have ended up looking as fake as the worst, amusement park versions of its original day. But this place, cleaned, restored, and refurbished, looks like it was sealed in plastic in 1957 and reopened for the present. All of the fixtures and tables and curb stations look absolutely perfect, like the Kaplans hired Mad Men‘s design team and asked them to use their expertise to build a restaurant. When this place hosts their occasional meetings of hot rod clubs and old-timey car enthusiasts, it must be a complete mindblower. 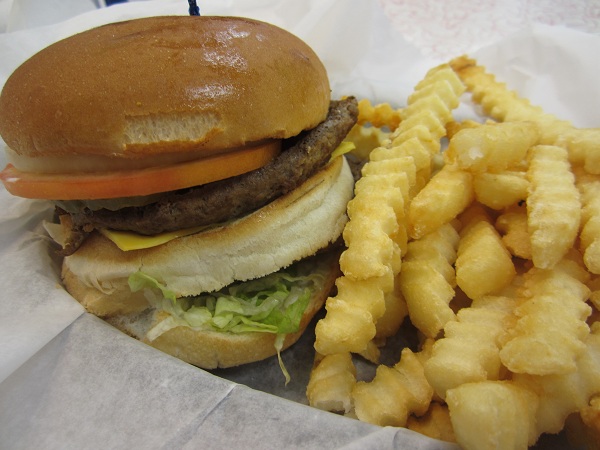 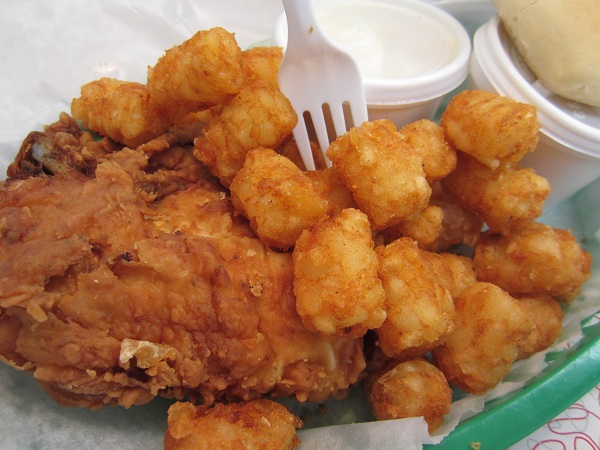 Unfortunately, while I marvel at the Parkette’s look – and that amazing sign, the sort of fixture which assuredly looks best at night, and an expensive indulgence that would probably bankrupt a startup restaurant – the food is really hit-or-miss. On this trip full of burgers, I ordered their popular Poor Boy, a double-patty version with tomato and a huge onion slice, and found it tolerable, but just barely. The fries were good enough for the baby to eat without complaint.

We had much better luck with the fried chicken, which really was excellent in every way. It was juicy and crispy and every bit as good as we had hoped. I couldn’t blame my daughter for only sparing me just a bite. After all, she’d been waiting 360 miles for something that lived up to the hype.

Other blog posts about Parkette:

One thought on “Parkette Drive In, Lexington KY”