We finished up in Miamisburg and made our way back to the hotel in Dayton, where the next order of business was doing something about this hunger-striking baby. He was not interested in eating or drinking anything until we got back to the room and he had some prime rambunctious time and, once Marie got back from work, he agreed to a bottle and some attention from her. We could tell that he was not feeling his best; separation anxiety and strange surroundings didn’t help much. We gave him a good break, food, and lots of love, packed and loaded the cars, checked out and made our way south.

Marie’s cousin Kathy had invited us to visit and stay in Hamilton, where she lives with her husband Darren and their three year-old son, whom I coined “Emperor Hassenfrass.” We stopped on the way at a Kroger to pick up a treat for the emperor, and also a twelve-pack of Ale-8-One and a bag of Grippo’s Bar-B-Q flavored chips. As we got settled in and I recounted our fooding adventures, Darren told us that a frequent meal among some of his friends is a pizza from a local chain, Cassone’s, and a bag of Grippo’s Bar-B-Q.

Friday morning, Marie went back to Dayton, and the emperor went off to school, and the kids and I drove back into Cincinnati for an early lunch. One of my buddies from the Roadfood.com site, who goes by the handle “Wanderingjew,” had recommended Blue Ash Chili. When it first looked like we would be either in Dayton or in Columbus for the whole trip, I didn’t think that we would get the chance to go, but with Columbus scrubbed and time planned with Marie’s family in Cincinnati, I penciled it in. Before we left, as we had previously done with Lexington’s Parkette Drive In, my daughter and I watched Blue Ash’s appearance on Food Network’s Diners, Drive-Ins and Dives and planned accordingly. 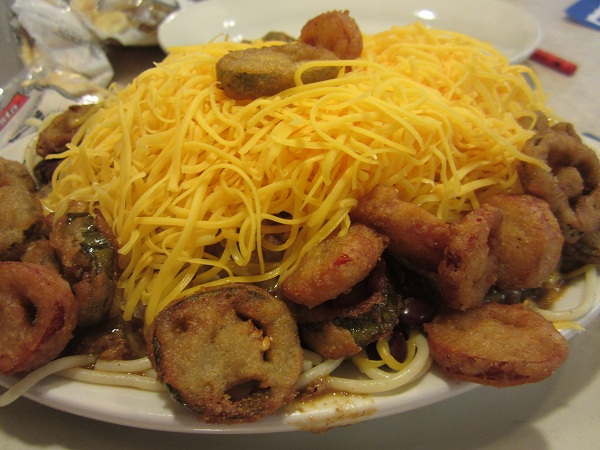 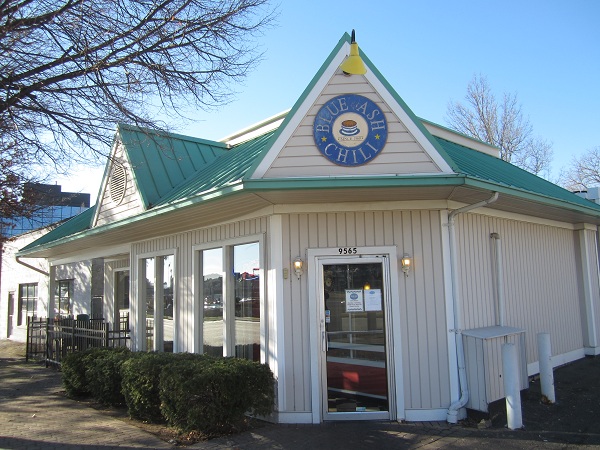 Blue Ash Chili opens at the agreeable hour of 10, which is perfect for people with a lot to do and not a lot of time. It’s easy to find, just a hop and a jump from I-71, but I don’t see how anybody’s meant to park when this place gets busy. There aren’t very many spaces in their parking lot. It’s been here since 1969, and has a second location a little further north, in Mason. The original store has two dining rooms, counter service, and serves up pancakes, goetta, burgers, and hot dogs along with their chili specialties. In their hands, anything can become a chili specialty, even lasagna or Philly cheesesteaks.

My daughter had been craving the chili lasagna since we saw it on YouTube, and it didn’t disappoint. An order is nine dollars, and it’s a huge, ugly plate of the stuff, with ladles of their very good chili poured over it. She loved it and cleaned her plate, but I passed, settling on a simple six-way. Many Cincinnati parlors have their own ideas about what to do after you’ve served up a five-way with noodles, chili, beans, onions, and cheese. At Blue Ash, they add fried jalapeno caps. It turns out this is a remarkably good idea, since their chili is a little sweeter than many, like Camp Washington’s, and nowhere as spicy. The peppers add a lot to the flavor; I don’t think that I would have enjoyed it as much without them.

Of course, it isn’t possible to really dig in and become an expert on the region’s chili on such a short visit, but I don’t believe that reporting on it and not stopping by a Skyline while in town is all that fair. As I mentioned a few chapters previously, my older children and I sampled Cincinnati-style chili for the first time in 2006 on our way home from Toronto, when the only parlor that we’d heard about was the omnipresent, hugely successful Skyline, which has expanded to just about 150 locations in the region, and five in Florida. In part because Skyline was my daughter’s first experience with the chili, and in part because, whenever she would visit her mother in Louisville and ask to have supper at one of Skyline’s stores there, she’d be rebuffed, she had demanded that, no matter how many other independent or still-locally-owned chili joints we visited on our trip, we were obliged to return her to a Skyline. 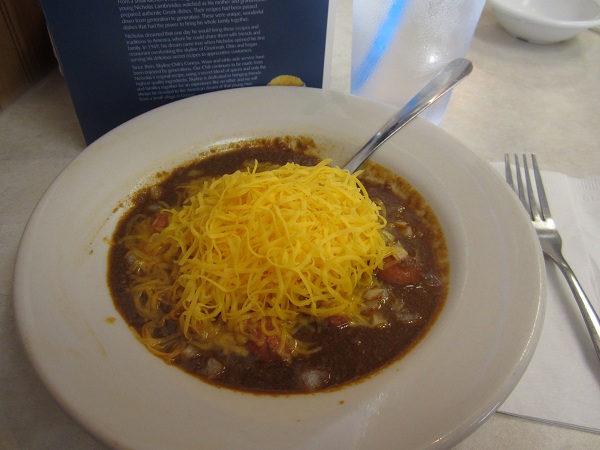 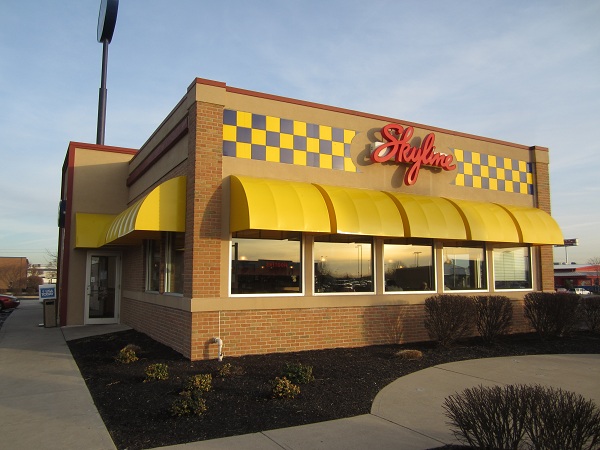 After a few other fun stops which we’ll share in the next two chapters, we needed to go back to Dayton and follow Marie back to the airport to return her rental car. Before returning to Hamilton, the four of us decamped to the Skyline nearest to the airport. It’s just off I-75 exit 59, below the big interchange with I-70, along with a sprawling mess of traveler’s motels, Sam’s Club, and other chain restaurants that run parallel to the highway on the west side, beckoning anybody who’s arrived by plane and has picked up a rental car to stop here for the night.

While my daughter dug into her five-way, pausing to say, with a reasonable degree of politeness, “No offense, Marie, but I really don’t like chili, not even yours much, but I just love Cincinnati chili,” prompting an even more patient smile and shrug in return, I enjoyed a Coney bowl without noodles, but chopped-up hot dogs instead. Marie, who doesn’t actually enjoy Cincy chili, settled on a bowl of black beans and rice with sour cream and onions. Somebody had set the music dial on “Make Grant Happy,” and we enjoyed Arcade Fire and the Smiths and all sorts of good music.

We treated this as a snack, because once we rejoined the emperor and his family after the sun went down, we had really, really good burgers on the agenda back down the highway.

Other blog posts about Blue Ash: