Probably the most peculiar place that we visited on our trip to Ohio was the granddaddy of the modern food trucks. Almost one hundred years ago, on March 25, 1913, the small city of Miamisburg was among those that were flooded after four days of intense rain swelled the Great Miami River beyond capacity. This entire corridor that we visited on this trip – Piqua, Troy, Dayton, Miamisburg – all went underwater. During the cleanup efforts, a local fellow named Sherman “Cocky” Porter started making burgers in a skillet to feed the homeless and hungry during the long weeks of the refugee crisis.

After things returned to normal, Porter opened his wagon for Saturday lunches, as so many people developed a taste for his odd little deep-fried burgers. They appear to be similar to what I’ve read about the legendary Dyer’s of Memphis: deep-fried in an iron skillet with grease that may well have been the same stuff in use for decades, they come out small, well done, and crunchy. They’re a little larger than a conventional slider, seasoned with salt and pepper and possibly one or two other spices, and dressed with a comparatively giant pickle and onion. They don’t offer any stinkin’ cheese or sloppy sauces, so don’t ask. 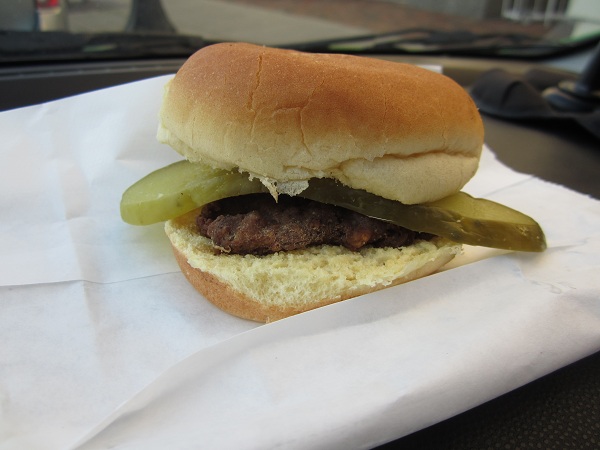 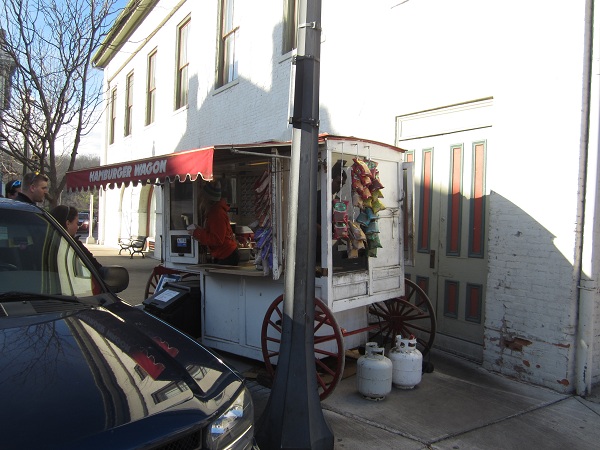 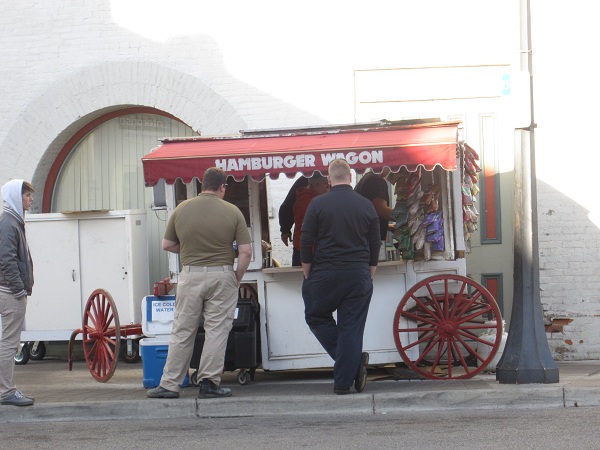 In time, the Hamburger Wagon became a seven-day-a-week concern. These days, it’s owned by a guy named Jack Sperry. It is principally staffed by high school students, two at a time, and it’s parked on the sidewalk next to a municipal building and if you blink, you’ll miss it. It’s not accurate to say that there’s always a line here. In fact, after I parked up the street and walked down, there was nobody else there, but a small group formed behind me. I got a kick out of watching the kid beat patties into shape with two spatulas and hold them under grease like a bully at the swimming pool.

The prices were fixed here for nearly a decade. Burgers, potato chips, and cans of pop are each $1.25. When they jacked up the price by fifteen cents in 2011, people acted like the world was ending. Nevertheless, it’s very easy to stay under budget here, and the experience is completely charming. I won’t claim that these are anywhere near the best burgers that I’ve ever had, but they’re unlike any in immediate memory. Seriously, a burger apiece for the girlchild and me, a bag of chips and a can of pop – I’m going to take every opportunity to call it that while we’re reporting about Ohio – to share for only $5? That’ll leave you with enough change left over to justify indulging a bit at lunch the next day…

Other blog posts about Hamburger Wagon: