Longtime readers know how I overplan our trips and leave with a ridiculous book of directions and maps. I was all set to hit the print button on November 28 when Serious Eats’ incredibly fun Hamburger Today blog had a “chain reaction” post about the midwestern Maid-Rite shops, which don’t quite sell hamburgers as much as they sell loose meat sandwiches. If you recall television’s Roseanne, she sold those in her diner. If you never watched Roseanne, you may recall the fascinating chapter about loose meat sandwiches, a.k.a. “canteens,” “charlie boys,” or “taverns,” in John T. Edge’s great book Hamburgers & Fries: An American Story. I certainly did, and abruptly put the second day’s itinerary on hold until I could see whether there was a Maid-Rite within driving distance of Dayton. There was, barely, forty-one miles northwest in Greenville, a town that’s just as close to Muncie, Indiana as it is Dayton. Well, that settled that. Directions were revised.

Maid-Rite is one of the oldest surviving fast food chains. It started in 1926 in Muscatine, Iowa. A butcher named Fred Angell concocted the sandwich, which is analogous to a sloppy joe without sauce. Rather, the loose ground beef with a spice mixture is shoveled into a mound on a hamburger bun after a quick smear of mustard. Onions and pickles and a dash of salt are added and it’s wrapped tightly in wax paper. It’s terrific. If it was any more popular in Greenville, they’d need extra police to handle the traffic. When we arrived about two in the afternoon, the right lane of North Broadway Street was backed up six cars deep making the right turn into this old building’s drive-through window. 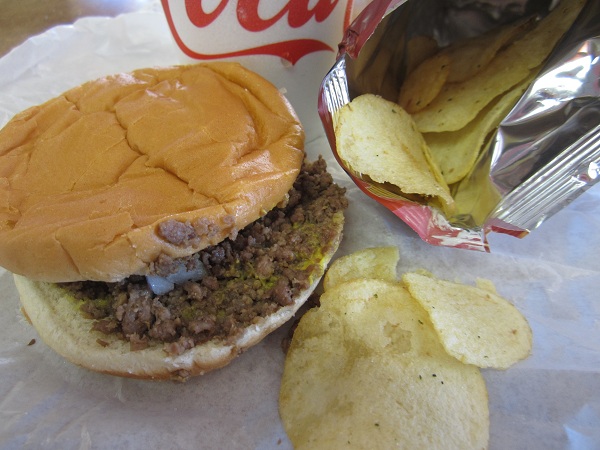 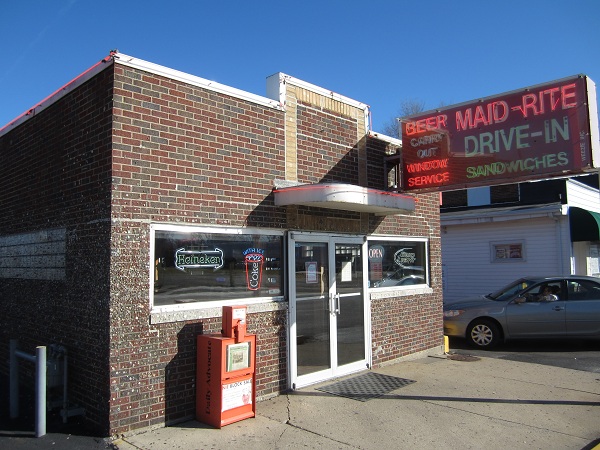 Writing about Maid-Rite, Edge reports that theirs is a really interesting story. Most chains, even the ones from such a long time ago, have centralized, commercialized, and homogenized. Maid-Rite wasn’t able to. While many locations – there are about fifty franchised stores, mostly in Iowa and Illinois – adhere to similar menus, the strength of each individual store in its community is so great that the corporation, based today in Des Moines, had the sense not to press for anything that would change what the locals love. If a small town wants a fast food experience that’s just like everybody else’s fast food experience, there is probably a McDonald’s on the edge of town. As the new owner of a Maid-Rite in Marshalltown, Iowa, great-grandson of the man who opened it, was told in 1985, you don’t mess with the Maid-Rite.*

Getting to Greenville was one of the most interesting experiences that I’ve had since starting the blog, or indeed driving anywhere. Later in the evening, I was reminded that this land was shaped by the retreat of the glaciers centuries before. What they left behind was a remarkable, flat, featureless plain. There are occasional trees, gnarled and black, but no forests and no hills. The state highways that connect the towns are the straightest roads I’ve ever encountered; the county roads that criss-cross between these are equally straight and level. Yet the density of population is surprisingly high; the farms, idle and gray for the winter, are smaller than farms in the south, but every inch of land is used, with house after house for miles and miles. There are none of the large houses or giant plots of farmland or when-the-heck-was-that-ever-open long-closed businesses along the side of the road, just house and farm, house and farm, house and farm, white, gray, and black, for as far as can be seen.

Given familiarity, I’m sure this is the most boring drive in the world. I found it disorienting and strange, a repetitive drive without landmarks, like an old Atari video game played on a black and white TV. It messed with my perception and sense of distance, and when the GPS called for me to make a second right turn on my way back from Greenville on the way to Miamisburg, I spent ten fruitless miles wondering when in the world I was going to cross a road that I surely must have left twenty minutes before.

Once we reached Greenville’s main street and my eyes returned to color, we soon found the Maid-Rite, with its neon sign glowing and its brick exterior pockmarked with thousands and thousands of wads of chewing gum. This location is independently owned, and not part of the chain. The baby had fallen asleep on the drive, and the girlchild decided to join him. “I’m not hungry, so I’ll stay with the baby. You go eat,” she said, and crawled in back with him.

This was a fine little snack. The interior is brightly lit and colorful, with a long counter. I took a stool and asked for a Maid-Rite, a bag of Mike-Sell’s brand green onion chips – another Ohio favorite – and a pop. I’m drawing a blank on whether it was Pepsi or Coke; I just needed something to give me a little buzz after that long gray drive. The Maid-Rite was just a wonderful little sandwich. It was very tasty, and certainly salty, but the pickles perfectly balanced the taste.

I enjoyed watching the buzz of activity behind the counter, as employees assembled a constant stream of Maid-Rites and Cheese-Rites for the drive-through window. The ground beef is in two steam-tray troughs and the two workers on loose meat duty, facing each other, shovel and form mound after mound of them. Since most cars seemed to be ordering sacks of six to eight of them, even the assembly-line precision – meat, salt, repeat – took a minute for each guest.

I left with a peanut butter malt, which was amazing. I opened my eyes wide, took in all the color of the neon and the chewing gum, and made my way back through the gray, south down OH-49 and OH-4 for another regional treat, and one of the most peculiar hamburgers that I’ve ever had. More on that next time.

*Family blog; not an exact quote.

Other blog posts about various locations of Maid-Rite: