Happily, for all the encroaching homogeneity in our culture, you don’t have to go very far to find a place where totally different ice creams are waging war for the hearts and minds of the locals. In southwestern Ohio, there are at least three very popular brands to choose from that don’t have any representation down in Georgia. These include Graeter’s, founded in 1870, Aglamesis, whose products are found in restaurants like Blue Ash Chili, and United Dairy Farmers, who have a chain of convenience stores and gas stations that also sell their ice creams in a parlor setting. I read about Graeter’s at Chopped Onion and at Roadfood.com (links below) and hoped that we’d have the chance to visit their Hyde Park store.

Graeter’s makes their ice creams using a “French pot” method. From Wikipedia, “As the cream freezes on the sidewall of the pot, a blade gently scrapes the pot’s sidewalls, folding the slowly freezing cream into itself. It takes about 20 minutes to freeze a two-gallon batch.” Many of their flavors include chocolate chips, but these aren’t quite like any you’ve had in a cookie. Basically, they pour liquid chocolate into the freezing cream while spinning it, forming a frozen shell around the ice cream. This is then shattered and broken into chunks of varying size, rather than the chips that I envisioned.

While their packaged pints are sold throughout the midwest and upper south – we have seen their ice cream in Nashville grocery stores, for example – their parlors are only in a few markets. You can visit parlors in a small band from Columbus to Louisville, and they each have a standard menu of 21 flavors, with an additional five or six seasonal offerings at any given time. Their signature is the Black Raspberry Chip, and I settled in for a sundae of that, with bittersweet topping, whipped cream, pecans and a cherry. My goodness, this was heavenly. 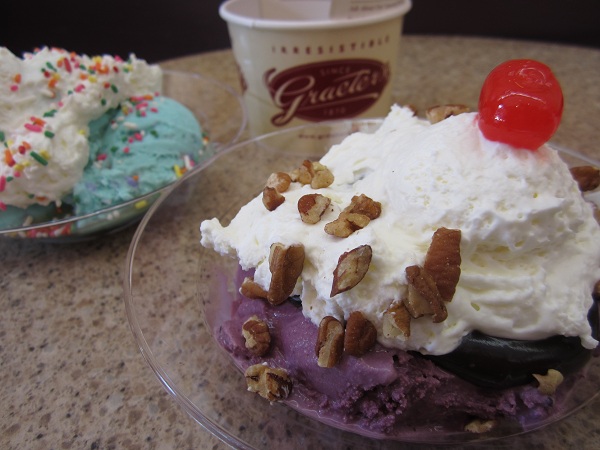 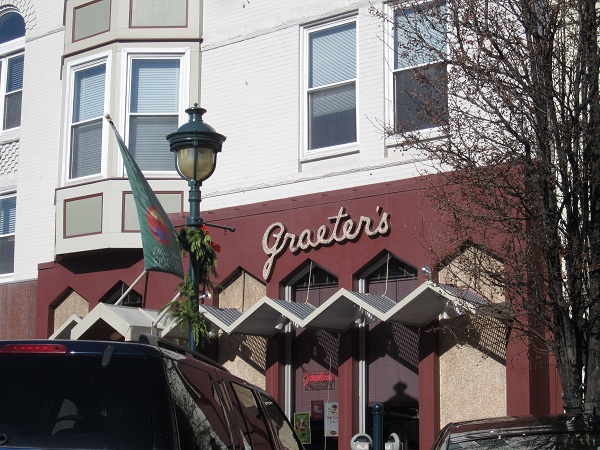 My daughter went with a Cotton Candy sundae, and the staffer who helped us asked whether she might like rainbow sprinkles rather than nuts. She’s the kind of kid who shouts “ermagerd” over My Little Pony; of course she wanted rainbow sprinkles on her Cotton Candy ice cream. “She saw you coming,” I said, while my daughter grinned ear to ear and flapped her hands like an overactive sea lion.

The baby enjoyed sharing our sundaes, the previous day’s “hunger strike” long forgotten, and I looked over the menu, wondering whether we should find time to make a second visit to get an ice cream soda made from one of their in-house syrups. I was quite pleasantly surprised to see phosphates on the menu, rather than national brand sodas. They mix up their own here, using syrups based on the ice cream flavors.

Since I enjoyed my Black Raspberry Chip sundae so much, I decided to try a Black Raspberry phosphate. The result was… curious. I wouldn’t call it bad, but it was on the wrong side of weird and I wouldn’t wish to repeat it. Also, unlike the phosphates that we enjoyed the previous month at Nashville’s Pharmacy Burger Parlor, these did have artificial colors and, rather than clear, it came out a very messy and ugly purple. I’m glad that I tried this neat flavor, but perhaps our next visit to Graeter’s, I’ll stick with a root beer ice cream soda. Or possibly nectar. When are we going to Cincinnati again?

Other blog posts about Graeter’s: