After the kids and I left Graeter’s, we had a real experience getting to our next destination, the Duke Energy Children’s Museum. I had printed directions to the museum from north of Cincinnati on I-75, and it didn’t occur to me that we’d be coming from I-71 and then going north. On the one hand, this is a good thing because there’s a great tunnel on 71, and it gave us more of an opportunity to see the city skyline, and I really love the way that they have the basketball and concert arena, the ballpark, and the football stadium all next to each other along the river. On the other hand, the exit that we needed for the museum center doesn’t exist going north. You can see the Cincinnati Museum Center complex from a long way off – just look for the Super Friends’ “Hall of Justice” west of the city – but not quite clearly how to get to it.

Eventually we got turned around and finally made our way to where we needed to be, and joined Marie’s cousin Kathy and the young Emperor Hassenfrass, who are members of the Museum Center. Packed around and underneath the enormous rotunda of Union Terminal, which once housed a huge passenger train station, are three permanent museums and an IMAX Theater, along with traveling exhibits like the current one for the Dead Sea Scrolls. Our hosts have memberships here, and the Emperor was looking forward to introducing the baby to the fun of this city’s children’s museum.

I confess that I was totally stumped by this place. They use their space so amazingly well that I had no idea how large of a place we were in, and grossly underestimated its size. Part of that is because, for the nearly two hours we were there, we didn’t make it into the whole thing, leaving a section called “The Woods” unexplored. A few weeks ago, a commenter left word that the Duke Energy Museum is much larger than The Children’s Museum of Atlanta, and I thought that simply couldn’t be right, but it is. It has very nearly twice the square footage, and their “Kid’s Town” area is just vast.

The baby decided that he was a little too small to join the Emperor in some of his play, including building a constantly-under-construction house, but he really, really enjoyed wheeling around a cart of foam “boulders” from a quarry. He also, contradicting himself, insisted on playing around the much bigger kids in a fabulous ball machine, even when the machine’s conveyer belts, cranes, and pulleys were taken over by older schoolchildren on a field trip.

Eventually, the baby started getting exhausted, and we needed to make our way back to Dayton to pick up Marie from work and return her rental car. On the way out, we bumped into Santa Claus, who waved at the baby and gave the emperor a big and gentle hug. The young man still had stars in his eyes when we rejoined our hosts a few hours later, as the sun started to go down, and they had picked a really good suggestion for supper. It’s a terrific little place called Troy’s Cafe, about six miles away in the town of West Chester. Just outside the I-275 perimeter, it doesn’t seem to have attracted much hype or curiosity from the region’s bloggers and foodies, but it’s a solid choice for a good meal. 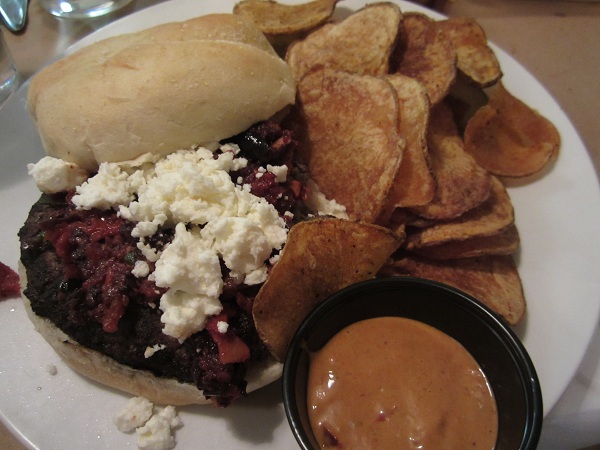 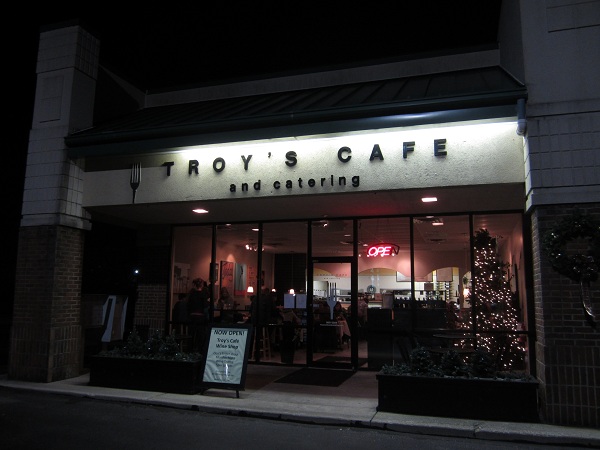 Troy Meyer, previously of Tampa, opened this restaurant in March 2009, hoping to come up with something “chef driven and fresh casual.” With counter service and a strip mall space, the overhead is low, and so are the prices. None of the entrees are more than $13, and nothing from their short wine selection is over $30. It seems to be doing quite well; on the other hand, the layout is not really supper-friendly, particularly on chilly nights, with a line right through the center of the restaurant to the door, which, constantly being opened and closed, lets in quite a draft. Then again, the line stretched to the door for almost the entirety of our visit.

The usual fare here is split between comfort food and burgers ‘n sandwiches. They source most of their ingredients locally, and almost all of their meat comes from a butcher shop, Dave’s Quality, just two doors down. The menu reminded me of a smaller version of Atlanta’s Roxx Tavern, with pork chops, salmon, and pasta dishes all sounding very tempting.

In the end, Marie and I both went with burgers. She chose hers because she likes a really well-made, high-end burger more than just about anybody, and me because I’d been eating fast food versions for the last two days (five of ’em!) and forgot what an $8 burger was meant to taste like. It was superb. Mine was the Greek burger, with an olive tapenade and feta cheese, and it was just terrific. I also really liked the homemade chips and dipping sauce a lot. I think that more Cincinnati foodies should get out to the ‘burbs and try this place, because it’s really worth the drive out of town.

Perhaps shamefully, though, the most memorable part of the visit came when the baby caught the eye of this mean-looking kid, maybe seven years old. The baby was happily eating away and showing off in his highchair when this kid in line, who was chewing determinedly on a lollipop stick, just gave my boy a stinkeye like you’ve never seen. The baby knew something was up, and looked around, as though wondering why the mean-looking kid was giving him such a glare. I decided that the mean-looking kid was the Edward G. Robinson of the playground, and began imitating his mob-boss commands on the jungle gym. “Dis is my hopscotch game, see?! Anybody messes wid dis chalk gets tied wid a jump rope and dropped in da kiddie pool, see?!” My daughter and I howled with laughter and just about fell out of our chairs. However, the noise was so great inside the restaurant that Marie, on the other end of the table, had no idea what we were cutting up over. She took some deeply unflattering photos of us chortling like idiots, but didn’t know why.

Demanding answers once we were back in the car, Marie was forced to tsk-tsk because we were laughing about the mean-looking kid with the lollipop stick. However, I could not help but notice that when I asked her whether she saw that mean-looking kid in the line, she knew instantly the child that I described. If any of you intowners in Cincy do make it out to the burbs, I’d watch out for him. He might stick you up for some milk money at water pistol-point.