Marie’s job had taken her back to Ohio, setting the stage for our biggest road trip since we started the blog, since our honeymoon expedition to Montreal and back, in fact. She flew to Dayton on a Sunday for a week. On the following Wednesday morning, about three minutes after the baby finally spotted a photo of Marie on the wall and remembered who it was he’d been missing – “Mommy! Mommy!” – the car was packed, and the baby and the teen girlchild were strapped in and we were off to join her.

Dayton is probably just over a seven hour drive from us, if one were to stick to the interstate and to fast food drive-through lanes. The way we did it, it was twelve there and fourteen back, giving us several opportunities to stop and eat properly, and also to visit some children’s museums. The first was a little northwest of Knoxville, up TN-162 from I-40. The Children’s Museum of Oak Ridge is a quite old institution, and predates the modern concept of children’s museums. It opened in 1974 and is more of a museum of the region and its history, which is really incredibly fascinating, geared toward elementary schoolkids rather than the typical giant play-centered open space with which we’re familiar.

Nevertheless, with 54,000 square feet of long, old elementary school corridors, it makes for a great stop for a restless nineteen month-old who’s been cramped in the car for so long. (Well, he had two mercy breaks for gasoline and to run around a rest area, so he wasn’t completely deprived…) And there were some things that he enjoyed doing and seeing, although the mock-up locomotive engine in the farthest room – an impressive “frame” for some small train dioramas – frightened and unnerved him with its lights and blaring horn.

We were there for not quite 45 minutes before moving on to the first meal of the trip, about ten miles east in the town of Clinton. It’s here that in 1930, Hoskins pharmacy and store opened, offering up lunch counter service seventeen years later when they moved to their present home. The old soda counter is still in place and looking every bit as timeless and charming as any traveler could hope. At one time, Hoskins expanded to an eight-store chain, but only this store remains today. In 1998, the US Department of the Interior added it to the National Register of Historic Places. Next door is the 1940s-era Ritz Theater, which still shows first-run films on its single screen. 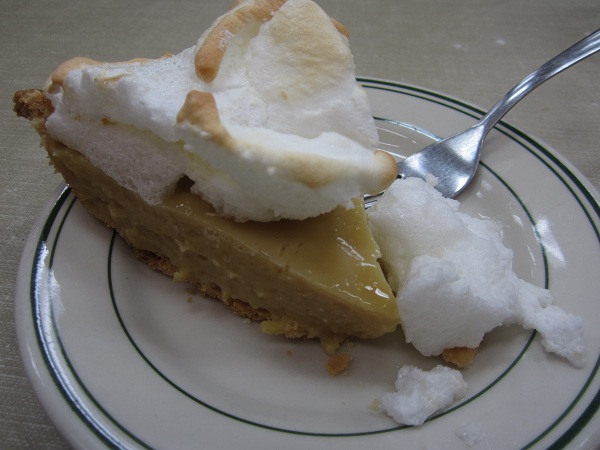 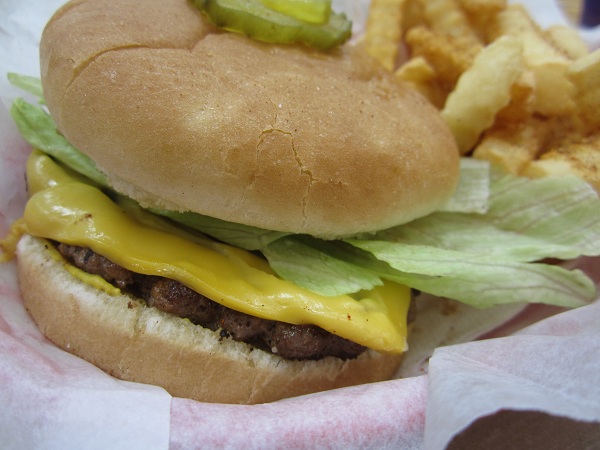 For me, this was going to be a trip with lots of hamburgers, and Hoskins started the trip off right with a fine fast food version, seasoned just right and served promptly with a slice of butterscotch pie. My daughter was looking forward to the next stop up the road, and chose to just have a snack of two scoops of ice cream. As with many places in eastern Tennessee, this is Mayfield country, and I can name plenty of brands that I prefer.

While the burgers are a reliable draw, it looks like the locals come for their daily meat-and-two specials. As the clock hit twelve, the line stretched to the door, and while the kitchen had a few orders, like mine, for burgers and things, the counter was busy serving up meatloaf and mashed potatoes and gravy. I must say that it looked really good. Wednesday is the busiest day for Hoskins; I started to think that the courthouse across the street adjourns all business for a few hours so that everybody inside it can come get some meatloaf. 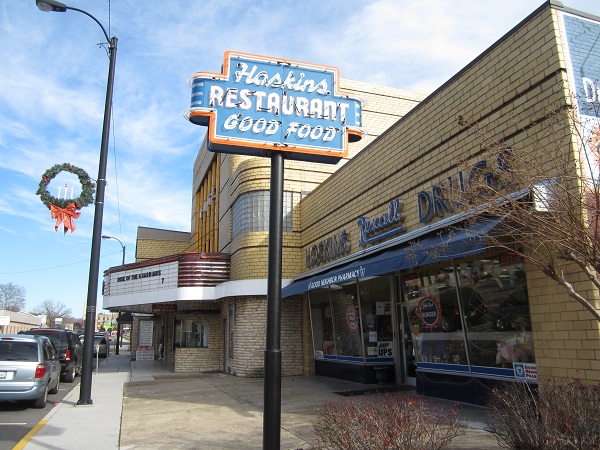 I found Hoskins by tracing the most direct line from Oak Ridge back to I-75 north, using TN-61 and avoiding possible Knoxville congestion entirely. Then I used Urbanspoon to see what I might find along the way to eat, and was pleasantly surprised when first an old drugstore popped up, and secondly when I saw that it had been featured at Roadfood.com.

This was quite a bit out of the way, but definitely a stop worth making. Given a little more time, we might have done a little shopping, but the kids and I were satisfied with our three hour detour back in time, learning the origins of the Secret City of Oak Ridge during the time of the Manhattan Project, and dining at a place that looks and feels much the same as it did when it opened two years after the war ended. This might not be the best possible stop for travelers with a nineteen month-old, but kids in the third or fourth grade would probably have a more interesting stop at the museum, and everybody’s bound to enjoy the counter service in Clinton.

Other blog posts about Hoskins: