This is Marie, contributing an article about Marion’s Piazza. Not a misspelling or typo – that is actually their name. They aren’t putting a weird spin on the misspelling-for-advertising gimmick, but rather the founder wanted to have an Italian piazza experience, knew that was not exactly practical in the coolish climes of Dayton, and made an indoor courtyard. This was unusual at the time (1965), because his principal local competition offered only carry-out. The place hasn’t been glossed over with a modern sheen, either – they still put paper orders up on a spinning wooden rack, for the exceedingly efficient-looking pizza team behind the counter to make the pies in full view and very, very quickly.

This is really the sort of place you’d want to go with a family or group, get a couple or more of the big pies, and sit around and chat over munching on the small square cross-hatched pieces that would make it easy to share. Sadly, as I was in Dayton by myself for the third evening in a row on a business trip, I had to settle for a small pizza in the company of a book. Still pleasant, but not as conducive to a long stay. 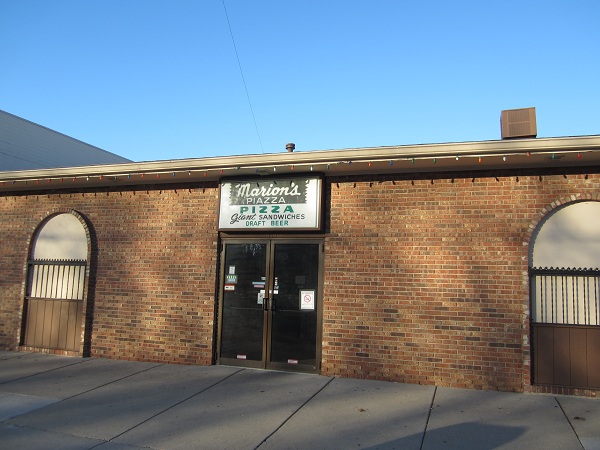 Locating the place was pretty easy. I had a few places in mind depending on what I was in the mood for, but asked around a bit about what would be good, and Marion’s got several recommendations. If I’d known how much topping they put on each pie, I wouldn’t have picked two, though. They are not cheap with their portions! The pies have a nice thin crust that is crisp but not crunchy. Sadly, the toppings I chose were entirely unphotogenic and wouldn’t have given a good impression even if the backup camera hadn’t failed yet again.

Marion’s has apparently done a pretty good job attracting the crowds that Mr. Marion Glass was aiming for, having racked up several awards (Dayton’s Best and Second In The Nation of Independent Pizza Establishments, according to their site) as well as some celebrity guests over the years. They have seven stores in the Dayton area, and recently opened their first store outside of town, in the Cincinnati suburb of Mason.

The establishment doesn’t offer just pizza, also having salads and pasta and sandwiches on their menu. According to the other guests at the time of my visit, those must be pretty decent or there wouldn’t have been so many non-pizza selections on the tables. However, there is a fairly brisk take-out business, and from the orders I heard while waiting for my meal, those are mainly pizzas. While my favorite pizza is still Pizza Palace in Knoxville – about which, more in a couple of weeks – this was a tasty selection, pleasantly and efficiently served.

Other blog posts about Marion’s: