It took us twelve hours, but we finally made it to Dayton. The toddler was unbelievably good for the trip. He whimpered and got frustrated a few times, which was to be expected, but he handled the road trip like a champion, even as we got caught in the northbound sludge of Cincinnati’s evening rush hour, and was rewarded with the awesome and welcome sight of Mommy in the hotel lobby.

We were happy to kick back in the hotel room for a while before going to get some supper, and Marie had plans for that. When she was previously in Dayton for a two-night visit, she enjoyed a late meal at Thai 9, really liked it, and wanted us all to give it a go. Unfortunately, the second visit, while still good, was in no way as transcendent as her first. We each enjoyed our meals – the girlchild had some teriyaki chicken, I had some stunningly spicy chicken dish from the specials (“Chicken Thai Spicy,” a mean concoction stir-fried with red curry paste, bamboo, mushrooms, broccoli, napa, carrots, baby corn, green beans, red and green peppers), and Marie shared a fried rice dish with the baby, who acted like we hadn’t fed him anything all day – but she was apologetic, promising us that it was much, much better the month before. Personally, I found it about on par with Marietta’s Red Elephant, which was not bad either.

What came next was just about the worst night’s sleep anybody’d ever had. For starters, I’m not even a good sleeper at home; in unfamiliar beds, I’m a real ray of sunshine. The electric heat, which we didn’t think about, dried out the room so much that I had to take a hot three-in-the-morning shower to breathe again. And the baby, finally reunited with his mommy, was having separation anxiety so bad that the pack-n-play just wasn’t doing it, but he still hasn’t learned to sleep with big people yet. Eventually, he settled on demanding to sleep on the floor next to the bed. Somehow, my daughter proved that she can indeed sleep through anything, waking in the morning totally oblivious to the chaos that had gone on all night.

Well, while the adults in the group could have used another eight hours of sleep – preferably in waterbeds with firm pillows overlooking some silent river in France – this was actually a business trip and Marie had to get to work, so we set out for breakfast. This was about eight miles south down OH-48 into the suburb of Centerville, and the home of some of the best doughnuts we’ve ever had. 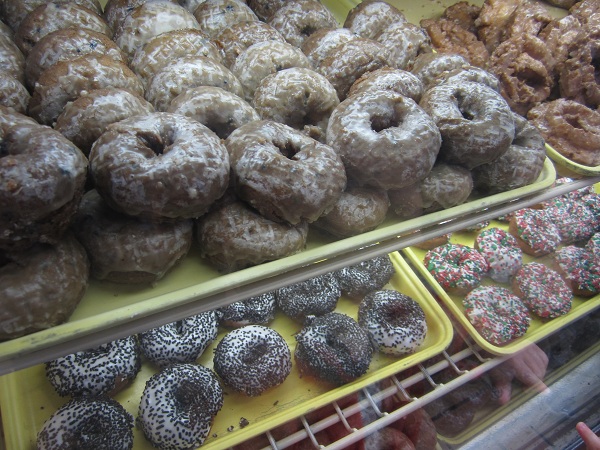 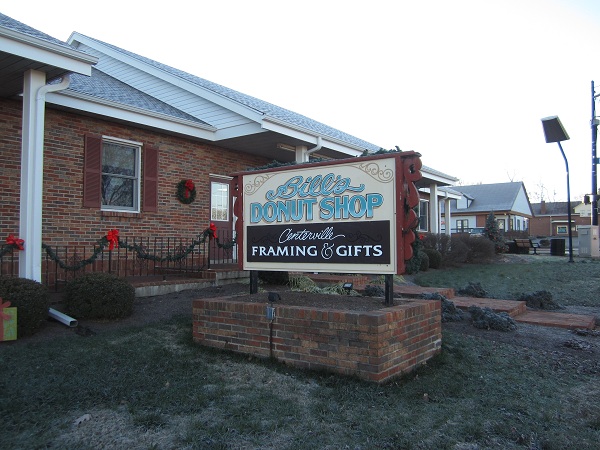 Bill’s Donut Shop originally opened in 1960, and moved to this location twenty years later. It’s an incredibly curious building. We were looking for something that resembled a restaurant, and nearly drove right past this place, thinking it was a dentist’s office or something. It’s exceptionally well located, on the right-hand side for the crowds driving up OH-48 into Dayton each morning, and it has a big crowd of locals who really pour the love on it.

These rank, clearly, among the best doughnuts that we’ve ever had, and they are really nicely priced at a sinfully low seventy cents each. We got several to sample, including the yummy and popular red velvet doughnut, but my favorite was the applesauce-flavored. I really loved the texture and the full flavor. Washing that down with some strawberry milk was just the perfect way to start the day. Marie doesn’t enjoy doughnuts quite as much as the rest of us do, and had an apple turnover that she really liked instead.

Another standout was the exceptionally friendly and helpful service from the staff, who each seem used to having a room full of families and commuters scratching their chins trying to figure out what they want from all these choices. Nobody was in a rush, and everybody wanted to take their time. I think that we went to ten restaurants during our four days in Ohio, and some service was golden and some wasn’t, but these good ladies here were the best of the lot.

I confess to a little Georgia-boy twinkling in the eye about the difference in language here. The baby was not happy about water in his sippy cup, and so Marie ordered an apple juice to split with him. She asked the woman helping us whether she could pour out the water, and she replied “Sure, I’ll just pour it in the pop machine.” See, this is why I suppose that it’s just as well that circumstances kept us in Georgia and not move with Marie’s job up here. I could never, not in a hundred years, get used to calling cokes pop.

Other blog posts about Bill’s: