This is Marie, contributing an article about the endless search for vanilla fudge, I mean about finding a candy store called Ye Olde Christmas And Candy Shoppe. It has been around for just over a year, having celebrated its anniversary in April, and since today is apparently National Fudge Day, it’s a great time to write about it.

I must admit to not being particularly interested in Christmas gear, and so if they hadn’t had a booth at the farmer’s market selling fudge – and therefore educating me that they also had candy – I might not have gone in. We got a block of their vanilla and their key lime fudge, both of them remarkable. One of the owners who was in the store said they get their fudge from someone in Cave Spring, GA. They hope to start making their own candies soon, but in the meantime are supporting local and regional suppliers with the products in their cold cases. She said candy and Christmas just belonged together, and that’s how they wound up selling candy in their shop. 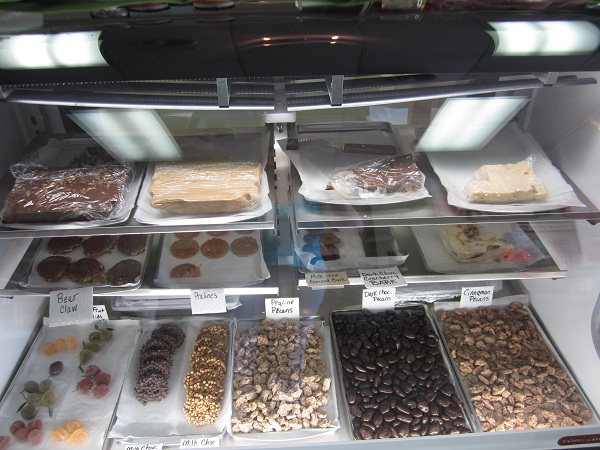 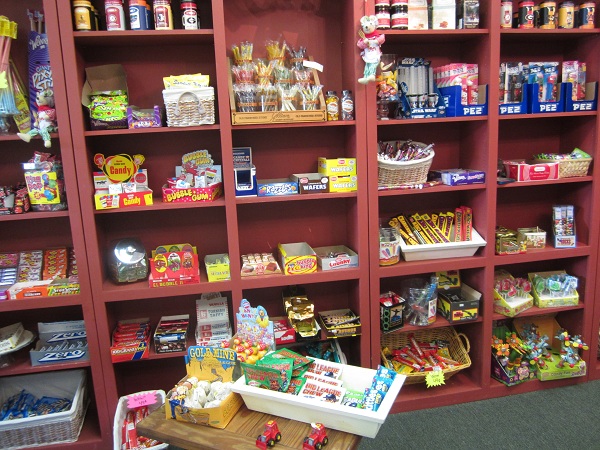 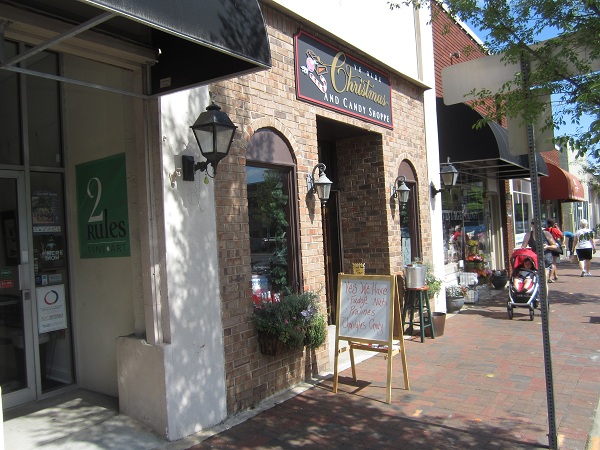 There is also a wide range of the standard candy fare, such as Jelly Bellies, Tootsie Rolls, etc. along with a barrel of saltwater taffy. However, for those of you who like things a little more unusual, they do carry some “nostalgic” brands like Zots, Necco Wafers, and NikLNip. The suckers that the baby picked from were also less standard – he got a raspberry cream sucker, so much better than a tootsie pop. What they said was that candy and Christmas just belonged together, and that’s how they wound up selling candy in their shop.

So anyway, I trekked over there with the baby one weekend recently and found that they were out of vanilla but they offered quite a few other varieties. I picked up their tiger variety, which is chocolate and vanilla with a peanut butter stripe between. I also picked up some taffy and a sucker for the boy. He was really well behaved for a two-year-old, and picked his sucker neatly and without fuss. I stopped back on my way somewhere else a week later, and found that although the varieties had changed, it would still be wise to call ahead. You do need to try the vanilla, though. It tastes like real vanilla, not artificial flavoring, and that is quite special.

Had I lived within walking or bike range of this store when I was twelve, they would have seen me nearly every day. As it is, traffic patterns and regular business hours mean I can pretty much only visit on the weekend, when we are incredibly busy. So likely I will only get fudge every once in a long while.

You can see all the restaurants (and candy stores!) that we have visited for our blog on this map, with links back to the original blog posts. It’s terrific for anybody planning a road trip through the southeast!