For our next stop in Chattanooga, I wanted to get some barbecue for a snack. Unfortunately, we were in town on a Sunday, and so our options were pretty limited. Every one of the new-to-us barbecue places in town that I know about are closed on Sunday, but then I noticed that Puckett’s Grocery has opened a new store, its fourth, downtown, just a block away from the Tennessee Aquarium. The restaurant opened in August and it follows the Puckett’s formula of live music, lots of branded merchandise, football on several TVs, and pretty good barbecue. To be clear, this is a slightly upscale chain, and while the original store is said to still have some of its downhome charm, this is a pretty corporate kind of place. We visited the Puckett’s in downtown Nashville three years ago, so we had a good idea what to expect.

Before we went to Puckett’s, we spent a little time at McKay, which regular readers may know is one of our favorite used bookstores. And music stores. And DVD stores. Here’s one reason why: in October, we dropped by 2nd & Charles in Kennesaw, which keeps disappointing me. I brought a small stack of old books to trade in, maybe thirteen in all, and they offered me the princely sum of $11.49 in credit. I kept the books, took them to McKay, and received literally four times that amount. This is why Atlanta book lovers include McKay in their Chattanooga itinerary. 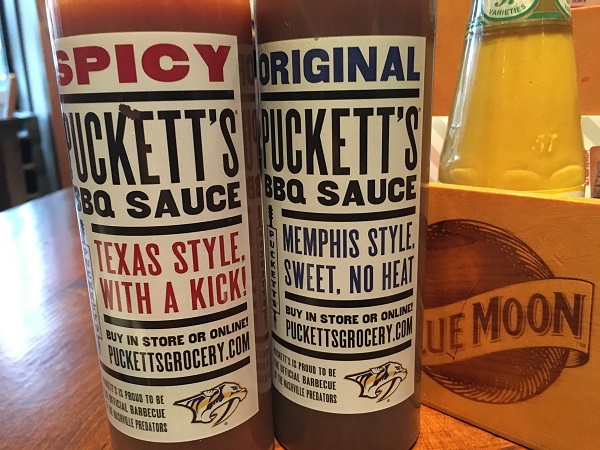 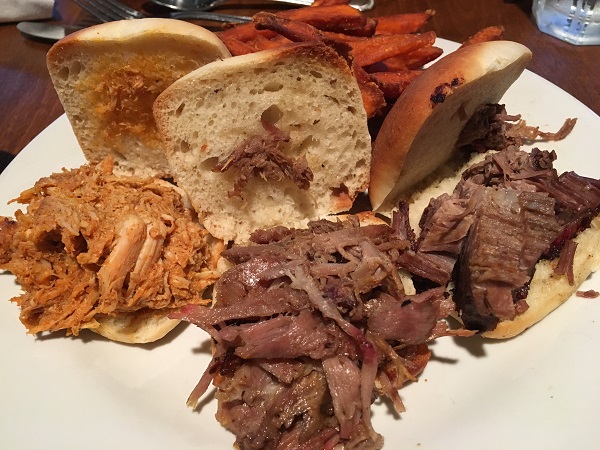 So we made our way through the pouring rain to Puckett’s and parked in the lot next door. All of the lots around are pay lots, most apparently run by an outfit called Republic, but the rates are lower than comparable lots in Atlanta. Marie and our son found a table while I got wet paying the charge, and I joined them, dried off, and started thinking about barbecue. I was really pleased that they offer a slider sampler. That’s a nice way to sample several meats.

Puckett’s has two sauces on the tables, one of them is a Memphis-style sauce that’s a little sweet, and the other, a Texas-style sauce, tastes almost exactly the same, only it’s just a little bit spicier. You can buy bottles to take home, along with various rubs, T-shirts, baseball caps, and mason jars.

One thing is definitely different between Tennessee barbecue and Atlanta barbecue. Regular readers may have noticed that I’ve been preaching about how brisket in Atlanta barbecue restaurants has been improving massively over the last few years. If you want to know what I’m comparing the great meat you can find at Moonie’s or Fox Brothers or Dave Poe’s against, come to Puckett’s. This brisket tastes almost exactly like the brisket that we saw everywhere here in the 1990s and 2000s. It’s flavorless and limp and tough and should be avoided. Happily, the pulled pork is quite good, and the chicken is even better. This chicken is completely wonderful and I’d consider ordering it again, were it not for a huge road block on their menu… 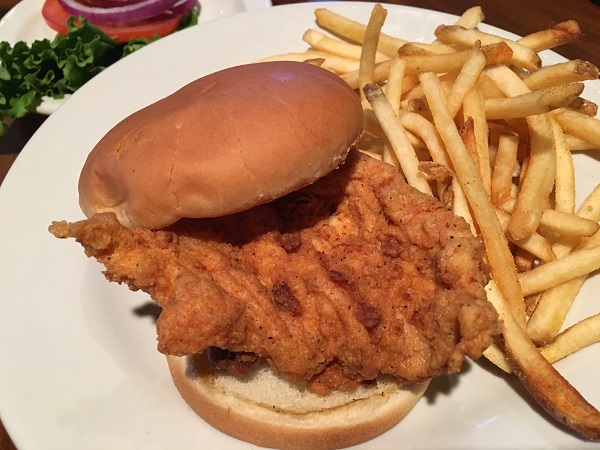 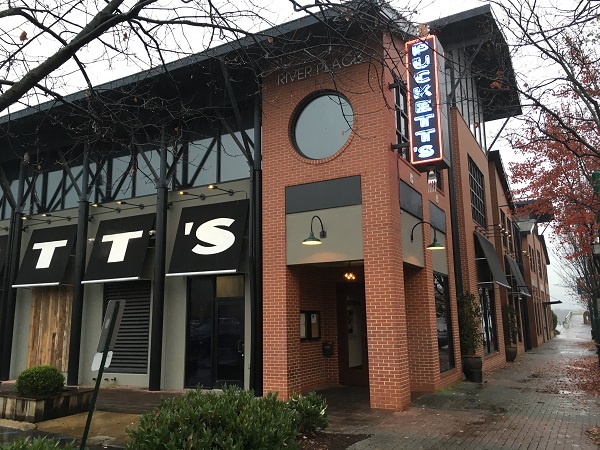 The fried chicken sandwich here is completely terrific. Not for the first time, I raised an eyebrow about Marie not ordering barbecue, and Puckett’s has a pretty dense menu of other things, but, bizarrely, it’s one of those other things that we ended up enjoying the most. It’s juicy and moist, while perfectly fried and crispy.

The service was a little slow, and it took a while for our food to come out, but it was delivered with a smile. The chain-averse among you might raise an eyebrow at visiting someplace corporate in downtown Chattanooga if you’re coming to the aquarium, children’s museum, or ballpark. That said, if you must visit a chain, at least this chain is a Tennessee-only one, and it’s worth considering, especially if you’re in the mood for a great chicken sandwich.

Other blog posts about Puckett’s Grocery: