A lot has gone on since the last time that I had occasion to write about Firehouse Subs more than a year and a half ago. They’ve expanded wildly in such a short time, opening about a hundred more stores – there are more than 500 now – and widening their footprint into ten more states than when I last wrote. Plus, they’ve installed a Coca-Cola Freestyle machine into every one of their locations, making them the first national chain to do so.

With all this activity, it is probably easy for us snobby hobbyists to dismiss Firehouse as just another national chain, despite the quality of their food. I said, last time around, that their sandwiches were “impossible orders of magnitude better than competitors like Subway or Blimpie,” and I stand by that. While looking for local meals, Marie and I have certainly eaten sandwiches from independent restaurants that we’ve enjoyed less than what this growing gorilla of the market offers.

For a time, for example, we really enjoyed Dagwood’s in Kennesaw. That store opened just as the small chain itself was in the process of imploding and being sued into oblivion by its franchisees. Left alone as an independent store with signage from a quickly-defunct corporation, we wished the best for them, but the simple reality was that, cut adrift from whatever suppliers that the national chain had engaged, the local guys had to cut lots of corners to make ends meet and the quality of the food and the staff plummeted. It eventually shuttered, and a barbecue chain, Dickey’s, stuck a store in that space.

Perhaps to counter the bias that Firehouse is either just another national chain, or in any way inferior to the local alternative, co-founder Robin Sorenson has been on a goodwill tour of Firehouse’s markets, reaching out to local writers to tell the story of his chain and show off the quality of their food. A few weeks ago, Marie and I joined several of our friends and acquaintances, and made some new ones (including The Divine Miss Mommy and A Cook and Her Books, whom you should check out) to have dinner with Robin, and to play with the Freestyle machine. 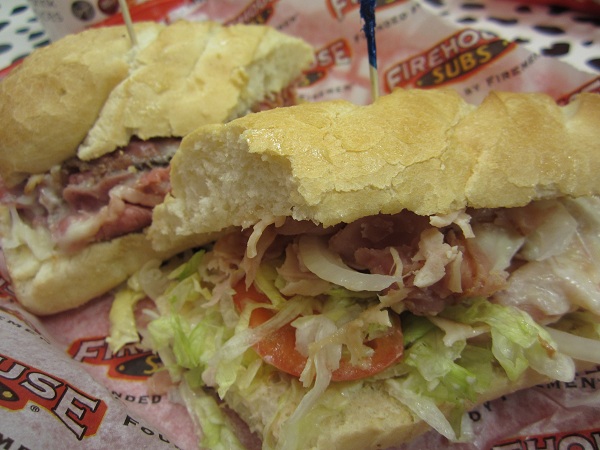 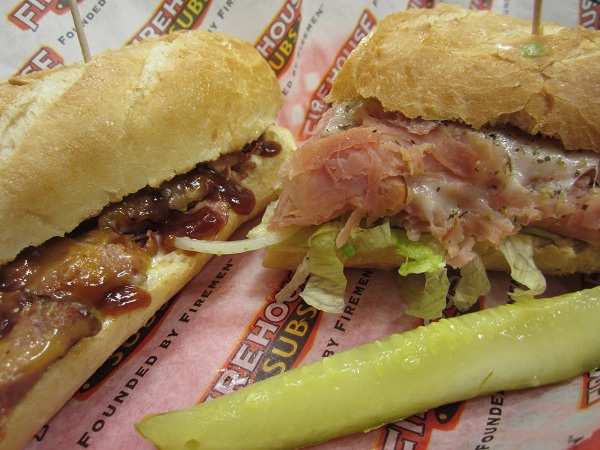 When I last wrote about Firehouse, I mentioned how neat it was that they had their own soda – Cherry Lime-Aid – in the six-head fountain. This drink has been carried over into the Freestyle machine. If you’ve not had the pleasure of a Freestyle before, you should certainly come by to have a drink or two. Using an odd “capsule” system instead of the traditional boxes and bags of syrup, the Freestyle can dispense hundreds of different beverages from a single spout. The standard Freestyle has 120 different Coca-Cola products. No, they don’t have all the incredibly weird flavors and varieties that the company makes – if you really insist on trying a Beverly for some fool reason, you’ll have to come down and pay for the tour at The World of Coke downtown – and retired brands like Surge are firmly retired. However, many rare and regional varieties, such as Orange Coca-Cola or Fanta Raspberry, are available here. They all, sadly, use corn syrup rather than proper sugar, but the novelty is worth the experiment.

Since I’m something of a soda nerd, I wanted to know more about the Cherry Lime-Aid. Robin explained that in Firehouse’s Jacksonville stores, while they were still using Pepsi as their supplier, they were hand-mixing Cherry Lime-Aid every day for guests. As Coca-Cola started angling for their business, they realized that Cherry Lime-Aid was Firehouse’s second best-selling drink in Jacksonville. Coke made the offer to try and duplicate the recipe for their soda fountains. So Robin mixed up a five gallon bucket, the first of many, and shipped it off to Coke’s secret and mysterious laboratories, where soda nerds even nerdier than me – well, okay, chemists – duplicated it, but only after quite a lot of trial and error and Robin telling them it wasn’t right. And just as soon as Firehouse and Coke rolled out Cherry Lime-Aid into 400 fountain outlets, they decided to convert to Freestyle, meaning the chemists were back at work duplicating the taste via capsule rather than box-and-bag. Heck, I’d have majored in chemistry if somebody had told me that kind of neat job was out there. Stay in school, kids!

At this time, Firehouse is the only restaurant chain with its own drink in Freestyles, although the technology is certainly available for other restaurants to create their own beverages and have them incorporated into the machines. Y’all need to get cracking, guys! Firehouse is leaving you in the dust.

Another thing that I like about Firehouse is the variety of hot sauces on the counter. Most locations have a couple of dozen bottles for guests to try, and it’s easy to be overwhelmed by the choices. I remember, before we started the blog, trying three or four and just settling on their house hot sauce, a sweet and spicy thing made from datil peppers, which grow primarily around St. Augustine. The restaurant put a few of the more popular bottled sauces from their mix on the tables for us to try. I’m glad that they did, as I might have stuck with what I was comfortable with, and not tried this amazing stuff called Gator Hammock. Much as it physically pains me to say anything nice about anything called “gator,” this stuff is completely amazing. I just poured about a third of the bottle onto my basket and used it as a sandwich dip. Who would want au jus when this stuff’s around? 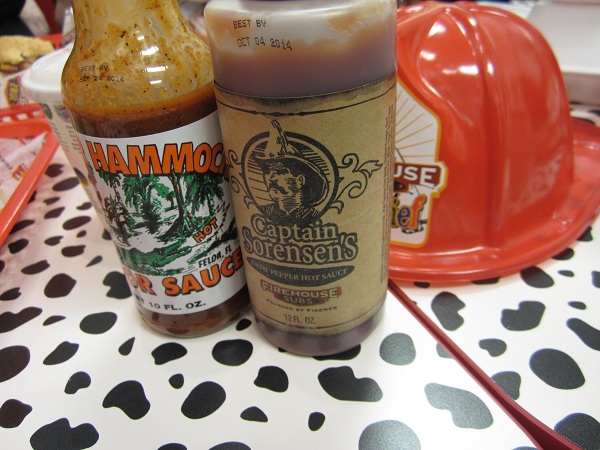 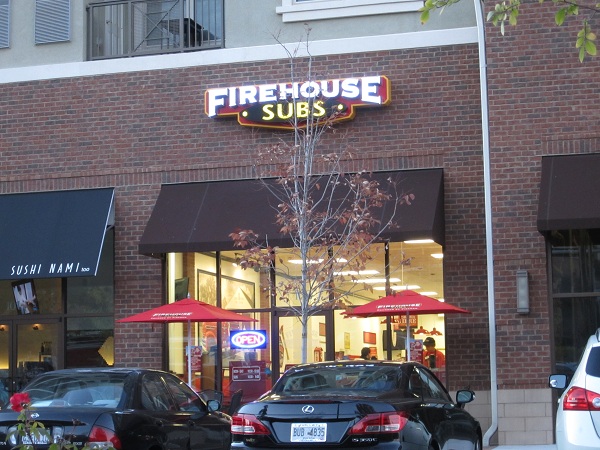 The sandwiches were of the expected high quality. I enjoyed the Hook & Ladder – smoked turkey and Virginia ham – and the Italian the most, although both the New York Steamer – corned beef and pastrami – and the Smokehouse Beef and Cheddar were also very good. The Smokehouse was a very pleasant surprise. It’s beef brisket, smoked for ten or more hours by a huge outfit in Texas, along with melted cheddar, mayo, and Sweet Baby Ray’s sauce. I remain amazed at the scale of operations of big businesses like Firehouse, and marvel at how they’re able to maintain a consistent quality across 500 stores nationwide. Robin explained that when his family began planning the launch of their first store, nearly twenty years ago, they visited as many sandwich shops around Jacksonville as they could – I didn’t ask, but I expect that Angie’s Subs in Jacksonville Beach must have been among them – and nailed down a long list of what they expected from a meal, and what they would deliver. They don’t compromise on quality at all, and that’s what makes them a good restaurant.

Robin was also very proud to tell us about the Firehouse Subs Public Safety Foundation. This was launched in 2005 as a means for Firehouse Subs restaurants to give back to the local community. Many first responders around the country are forced to make do with older equipment, lacking the funds to purchase the tools that their stations need. As a 501 (c) (3) non-profit organization, the Foundation effectively reaches out to provide vital funding, resources and support that they may not otherwise receive.

Individual restaurants raise money through the sale of five-gallon pickle buckets, cash donations at the counter and the “Round Up” program, which allows guests the opportunity to “round up” their bill to the nearest dollar. All funds are in turn given back to the Foundation. They then purchase equipment like thermal imaging cameras, extrication tools, CO monitors, automated external defibrillators, personal protective wild land fire clothing, air masks, and so on. I had to gently tweak the Sorensons for their over-the-top firefighter theme – I mean, dalmatian spots and helmets just do not make for good design – but they do come from a family of firefighters, and it’s understandable and admirable that they are using their success to give back to their communities in such a big way.

Would you like to give Firehouse Subs a try? They have given us four $10 gift cards for our readers. We want you to try for one, so please email us at GMSREGISTER (at) GMAIL (dot com) with FIREHOUSE SUBS as the subject, and include your name and postal address. We’ll randomly select four winners on the evening of Monday, December 10th and post out the gift cards the next day. What are you waiting for? Drop us a line! 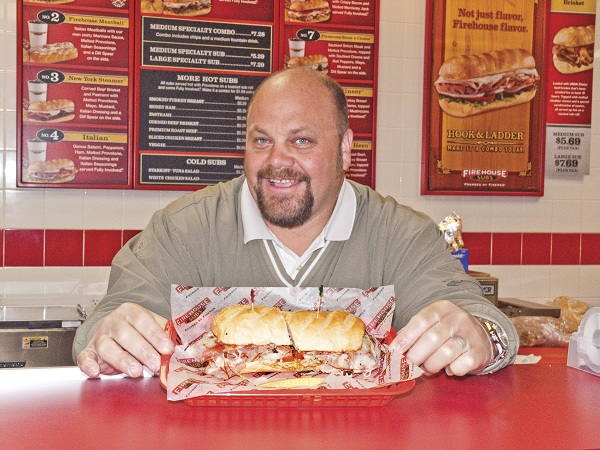 Other blog posts about Firehouse: