I was reading about how Firehouse Subs recently got over a huge slump in year-to-year sales by hiring the same ad company that Papa John’s Pizza uses, and convincing all of their franchisees to pony up a larger-than-normal royalty to pay for all the radio ads they were going to run. I’m going to suggest that learning stories like this and getting a broad view of the restaurant industry this way is no bad thing; almost all of our dining out dollars are spent at locally-owned businesses, and I rarely pay any attention to the corporate world of small chains like this one, with 415 small stores in twenty states.

In fact, while the franchises did apparently see nearly-double-digit year-to-year growth – and the temptation to turn this sentence into an impenetrable parody of incoherent marketing bafflegam is a great one – its message was still completely lost on potential customers like me. I very rarely listen to commercial radio, and when I do, I switch over to a college station the instant I hear an ad start. So it wasn’t the Arbitron market synergy that got us back into a Firehouse, it was my son. We let him pick someplace in Marietta, wherever he wanted, for his birthday.

We used to eat at Firehouse from time to time, but got out of the habit around the time that Marie moved in. Since she can cook so darn well, there wasn’t much need to go out and eat as often, and so when we did, it was usually to someplace a little more special and local. In time, Dagwood’s, which is somehow still hanging in there, became our go-to place for sandwiches, and I don’t think I’d been to a Firehouse in almost four years.

In the meantime, I missed out on what could be the start of a very fun new development: they have introduced their own branded soft drink. 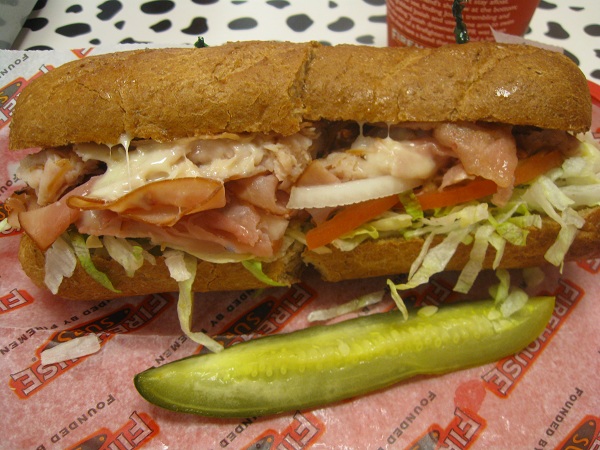 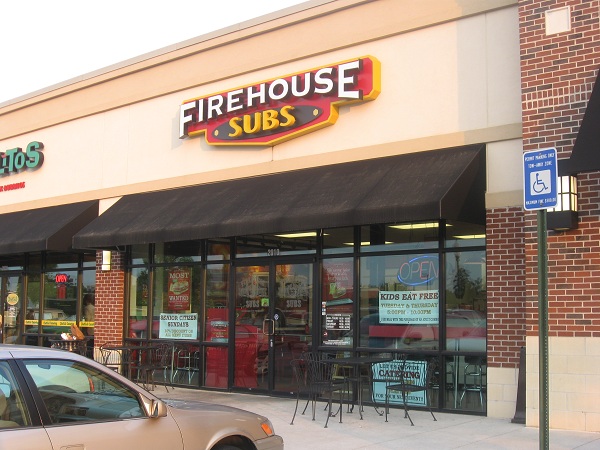 The first Firehouse Subs was opened in Jacksonville in 1994 by Robin and Chris Sorenson, who, like their father, had previously served their community as firefighters. Honestly, there’s an artificial over-emphasis on firefighting memorabilia and imagery, down to the dalmatian-spotted tabletops, that comes across as hopelessly manufactured and downright silly. Calling your best-selling sandwich a “hook and ladder” is one thing, but serving up the kids’ meals in a red plastic hat is just ridiculous.

Happily, the food is still quite good, impossible orders of magnitude better than competitors like Subway or Blimpie. There’s a short delay in getting sandwiches out to guests, as the meats and cheeses are all steamed before being placed in the buns. The result is tasty and different, especially because this chain does not scrimp in the quality of its ingredients.

Probably the best thing on the menu here is the meatball sub, which is served with delicious melted cheese and a really good, mildly spicy tomato sauce. My kids each had one of these. Marie enjoyed a steak and cheese with mushrooms, which was nowhere close to the best in the city but not bad, and I had a club with turkey, ham and bacon. Even though it has been years since I was last here, I remembered that I enjoy topping my sandwich with the house hot sauce. It’s not especially hot, more of a mild and sweet brown sauce made from datil peppers, but it goes extremely well with a ham sandwich. For guests wanting something much spicier, the chain emphasizes the “fire” in their name by way of a remarkable collection of bottled hot sauces, some of which are just stupid hot with scotch bonnets and habaneros and overpower the sandwich.

Yet it was the soda fountain that got my attention on this trip. Since it was for his birthday, I told my son he could have a combo meal with a drink. (We almost always just get water at restaurants, to save on money and calories. Exceptions are sometimes made for sweet tea with barbecue, but this is a rule that children, all children, really loathe.) He noticed that Firehouse has its own branded beverage in the fountain – a cherry limeade that guests can make even more tart by adding limes of their own. I thought this was a really terrific idea and it tastes quite good, too. I hope this is a successful move by the company and it leads to more of their own drinks.

I’m certainly going to remember the cherry limeade when it gets really hot in a couple of months. With the Chilito’s next door selling their wonderful horchata, I’m not going to be sure where I should stop to get something to drink.

(There are apparently something like twenty Firehouse Subs locations in the Atlanta area. Identical experiences can be had at each of them, but, corporate shenanigans being what they are, curious soda fans interested in their branded limeade might do well to phone before driving to a store, in case their home office has pulled it.)