This past Friday after work, I drove down to Hapeville, an inside-the-perimeter suburb best known for being that place in Atlanta where the airport is, and was very pleasantly surprised to find some genuinely amazing barbecue at Hambones, a restaurant that I hadn’t heard of before last month. Sadly, I don’t remember where I heard about it beyond “Facebook.” Nobody has (yet) stepped forward to let me know it was them, or one of their friends, who mentioned the place, so I don’t know whom I should thank, but man, somebody’s due a handshake.

Hambones has been open for several years on a side street off the main drag (Central Avenue) through town. In a really weird bit of real estate, it is within sight of another barbecue place called Pit Boss. I had considered just doing a sandwich and stew at each place, but it didn’t work out that way, because the amount of food that Hambones serves up is pretty ridiculously huge. I had the “Q and Stew” lunch special, which comes with a big sandwich, a bucket of stew, a shot glass of a second side and a Big Gulp-sized drink for under nine bucks, and so Pit Boss will have to wait for another visit.

On a side note, I have been totally lucking out lately in finding places with amazingly good Brunswick stew. It’s like the food gods are paying me back for that awful, wretched stew that I had at Georgia Pig down in Glynn County last month. In April, I’ve been knocked out by how good the stew has been at Speedi-Pig, Dave Poe’s and now at Hambones. The stew here is thick with chicken, pork, corn, tomatoes and lima beans and I really enjoyed it hugely. 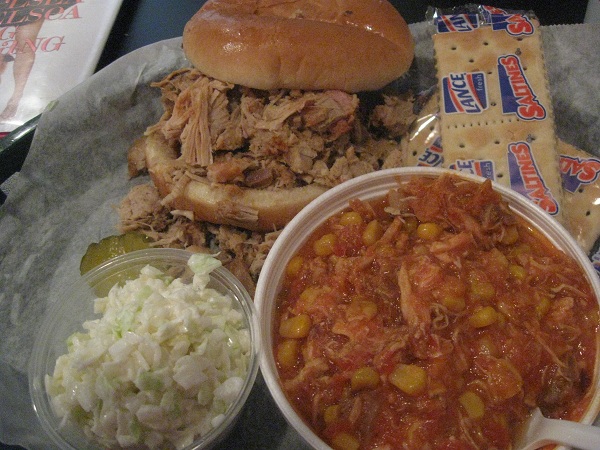 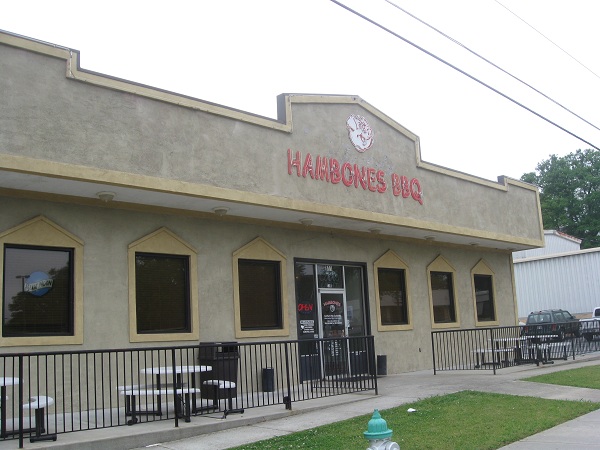 Hambones nominally opens at 11, but in reality, the doors are unlocked a little early, because the lunch crowd this place gets is huge and in a hurry. The setup is a little unusual. They have a carry-out register at the bar, and a small register for dine-in orders. The register set-up, in any other business, would look like the place where you bring your check on the way out, rather than a “order first” window with a big menu board. The lunch line is long, and you pick up a menu on the way to the small register. The design of the place is no-frills, with mismatched chairs, large, dark interiors with a few scattered TVs tuned to ESPN, and a hideous overuse of the awful Comic Sans font on all the menus and labels. It is the polar opposite of a franchise chain, as it should be.

At any rate, when you order the lunch special, you get your choice of chopped pork, chicken or beef. They will serve it sliced or pulled for a fifty-cent fee. I also noticed that they charge fifty cents extra for fries, which is very unusual. Many places, including Dave Poe’s, will charge you an extra half dollar for the stew but call fries a regular side. I later learned that Hambones makes their fries in-house and they are very popular. Perhaps I should have tried those.

The pork is very tender and very smoky and doesn’t need sauce, but there are three on the table and they are all very good. The house sauce is a traditional red tomato-vinegar mix, and the house hot sauce is the same, only amped up with peppers. I liked this one best, but I was also quite taken with the rib sauce, a black mixture which tasted to me like there was less vinegar in it. In all, this was a quite good meal, with a lot of food served up with a lot of character for a very fair price.

I wasn’t quite done with Hapeville, because I heard about a soda fountain in town and so I went to go get some dessert. Central Avenue forms a main street through the small city. We’d driven through it some months back, during the short barbecue tour that the family took in January after the ice storm, to get from the I-75 corridor south of the city over to College Park. Driving through it, I could then feel the icy fingers of my past crawling along my spine. I think that this girl whom I inadvisedly dated for a few months way back when I was in high school lived around here. 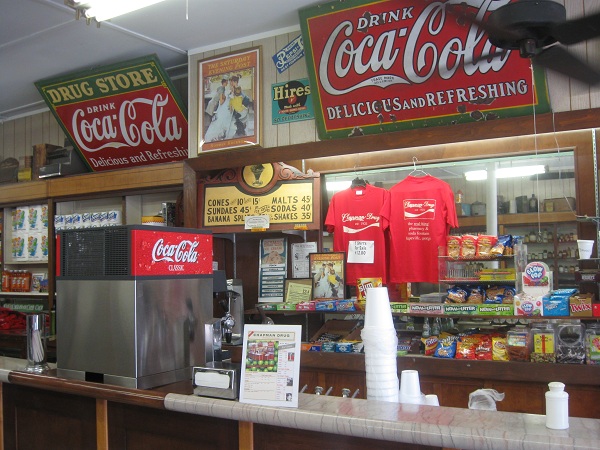 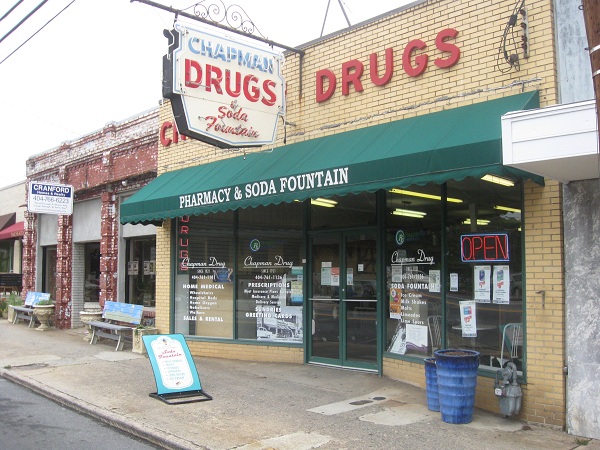 There are just a few retail places along Central that are still open, with several restaurants keeping traffic coming through. Chapman Drugs is located next to the Freemason lodge, and there’s plenty of twenty minute street parking; just enough to grab something from the pharmacy and a milkshake or a limeade. I had two-scoop malt with peach and vanilla and it was just wonderful. Every milkshake should be that good.

Chapman Drugs is, inconveniently, not open on Saturdays. (Neither is Hambones, for that matter. I have to curl an eyebrow over barbecue joints where you can’t get a Saturday lunch.) This does raise the issue of when Marie will be able to come down here and enjoy a milkshake with me, but she’ll have a maternity leave in a month or so, and I think she will certainly be due an awesome milkshake. Maybe we can visit Pit Boss as well for lunch first and I can see which of the two barbecue places on Virginia Avenue I prefer.