I went a whole eight days without going anywhere outside my normal travel radius and just about went crazy. As Marie begins emotionally “nesting” and wanting to get settled and make a safe and comfortable place for the baby, perhaps I’ve been reacting against it. I spend a little free time looking over Google Maps and wondering where we might go next. Then I start planning and charting and I’m left with more looping trips through Alabama, through Tennessee, through the Carolinas, than we may ever end up taking.

This past Saturday, we marked another restaurant off our goal of hitting the Georgia-reviewed restaurants at Roadfood.com. Marie and I took the kids up to the town of Chatsworth, about one hour’s drive, to visit a meat and three place called Edna’s. Travelers have been raving about this place and its fried chicken for many years, but we found several equally interesting meats and vegetables on the menu. What we didn’t find, however, was something else to eat along the way. We drove up I-75 about twenty-four miles and then up US 411 another forty, passing through the towns of White and Fairmount and a few other little farming communities. Would you believe there wasn’t a barbecue place at all along the way? Forty miles up an old US highway and not one. That sort of stymied my plan to feed my family at Edna’s and try something new myself on the way back. Even my backup plan got stymied! 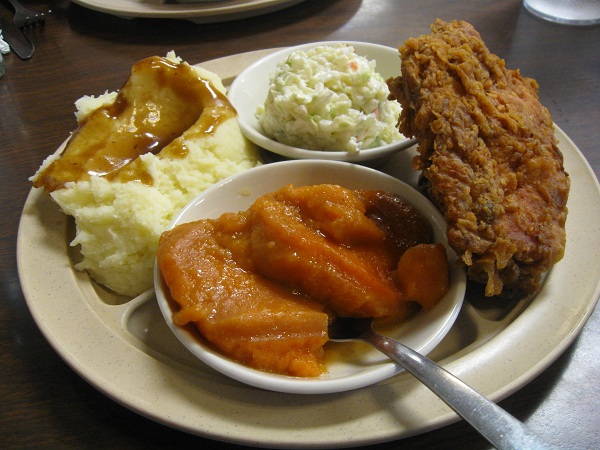 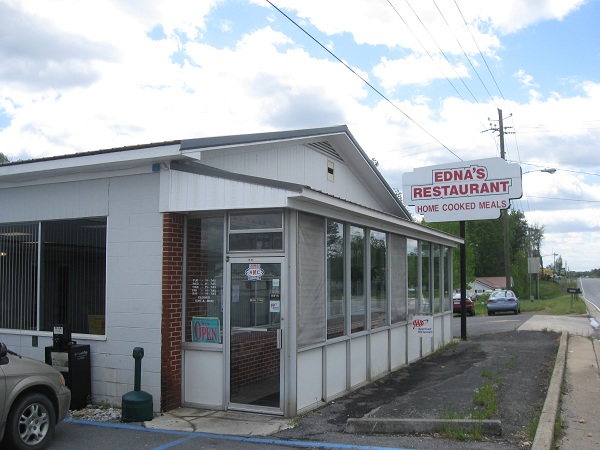 Anyway, if you look around, you’re certain to find comments online suggesting that Edna’s is not as good as it once was, when Edna was still living. If that’s truly the case, then this place must have once been just unbelievably good, because what is here today is quite excellent, and about on par with the very good Doug’s Place in Emerson. Chatsworth is a bit off the beaten path, but anybody traveling in northwest Georgia between Dalton and Ellijay should definitely find it on the map and plan to stop in for lunch or supper. Their fried chicken, which Marie and my son each really enjoyed, is available most days, although the ham shanks that I enjoyed are a little less frequent. This was a delicious bowl of shredded, salty ham. I don’t know that I remember seeing this on a menu before; it was certainly delicious.

Everything about our trip was excellent, from the service to all the wonderful vegetables. Marie and I each had the pickled beets, which, like the green beans that my daughter ordered, were prepared with onions. This was very unusual but a neat and tasty touch. My son really liked his yams, although he wasn’t completely sold on their cole slaw, which is available daily. I also had the macaroni salad and some apple sticks, deep fried apples and cinnamon that our server suggested would have done just as well as a dessert. She was very honest about which of their vegetables were fresh, and which, like the peaches we ended up not ordering, were canned. (Well, I’d say it was pretty flaming obvious that the peaches weren’t going to be fresh, not in April, and it didn’t warrant asking, but the server honestly answered the question, anyway.)

This was a genuinely good, relaxing trip up to Chatsworth, at entirely the right time of the year. The only sour note at all happened about twenty miles back down the road. See, while we didn’t see any barbecue places, I did notice a drug store and soda fountain in Fairmount and thought that would make a fine place to stop and get a dessert. Well, despite the sign on the outside clearly stating that they served lunch from 9-2, with “RX 9-6,” when we went inside at 12.30, the people milling around the pharmacy desk told us they’d quit serving lunch. “The sign outside says lunch is ’til two,” I said. “Well, lunch is closed,” is all we got, so screw that place.

We had an even nicer drive back, as I noticed on the way up that US 411 crossed GA-140. We took that back to Canton, along a wonderful, curvy, tree-lined corridor that I hadn’t seen in ages. It also took us past a barbecue shack called Mo-Ribs that I’ve been meaning to visit for some time, but then it was too late to realistically stop, as my son was due back home for an anime club meeting, and I didn’t want him to be late. Then again, we’ll be having the baby at a hospital not too far from here next month; maybe I’ll find a chance to nip out and pick up some lunch for us.