For Marie’s birthday in March, she and I enjoyed a nice lunch at Sam’s BBQ1. When I wrote it up, I noted that not too long ago, Sam was in business with a fellow named Dave Poe, and they had opened a second location on the other side of Marietta, on Whitlock. We’d actually eaten at this one before, in 2007 or 2008, around the time Marie was thinking about moving in, but to be honest, I wasn’t paying any attention whatsoever to that meal at the time, as I was aggravated with one kid or the other over something. Never do this. Never eat when you’re annoyed. You won’t enjoy the meal and you’ll forget almost immediately that you ever had it. If you must eat when you’re annoyed, make it something you won’t enjoy anyway.

So Sam & Dave split up shortly after the release of their single “Knock it Out the Park,” which failed to chart. Or maybe that was a different Sam & Dave. Sam got BBQ1 and Dave got this place on Whitlock and, because Cobb County might as well be Antarctica as far as the Atlanta foodie community is concerned, both restaurants slipped completely off my radar, even though I live here, and it took me ages to even remember that either place was around. Well, on Friday last week, I finally got back over to Dave Poe’s place for lunch, and, I promise, this time I’ll remember the experience. I even wrote it down in a blog and everything. 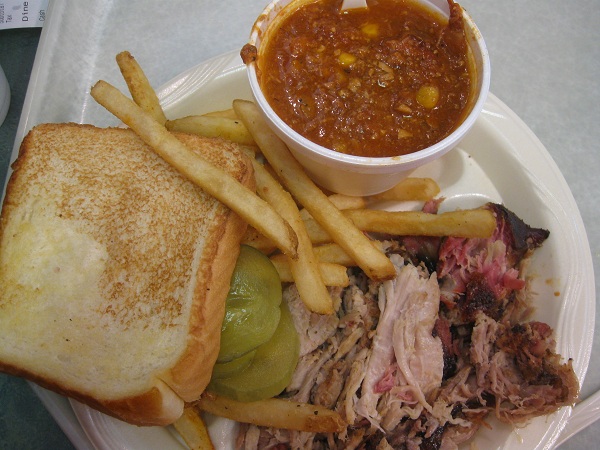 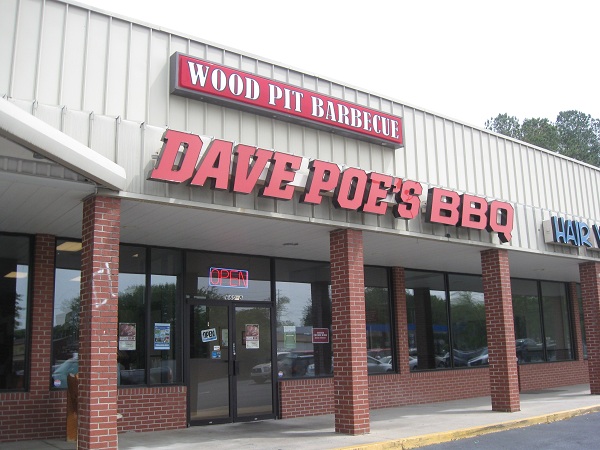 There’s a lot to like about Dave Poe’s, and one of the standouts is the slogan “traditional 19th century pit-cooked.” They use lots of classical imagery on their website advertising, not merely “old Americana” and Coca-Cola nicknacks, but stylish museum pieces with garish, amusing copy atop them speaking longingly about the restaurant, tongue firmly in cheek. The fun and very original design totally belies the restaurant’s location in a nearly-dead strip mall, with a parking lot that’s been used for mortar practice.

Early last month, Jon Watson, writing for The Atlanta Journal-Constitution‘s “Food and More” blog, compiled his list of the metro area’s five best examples of pulled pork. Dave Poe’s and Sam’s BBQ1 ranked joint fourth on the list, as Watson could not determine any difference between the meat at the two places. Granted, I tried them a month apart and not on the same afternoon, but I have to agree that they tasted the same, and there’s no crime in that. This is extremely good pulled pork. (Watson’s is a very interesting list, by the way. You should have a look at it; two of the other four restaurants there are on my to-do list as well.)

I drove over there with Randy and Kimberly, and we enjoyed very similar lunches. They had some fried okra that they said was quite good, but we each had pulled pork, fries and Brunswick stew. Now here, I see that I can’t make a comparison between this place and Sam’s, as Marie and I did not get any stew there last month. This stew is really terrific and I enjoyed the daylights out of it. To have found stew this good at this place and at Speedi-Pig in the same month is a very pleasant surprise! That said, Kimberly said that she preferred the stew at Bub-Ba-Q in Woodstock, which is certainly quite good, but I really like this even better. I liked it so much that, two days later, Marie and my son and I had business in east Cobb, so we had supper at Sam’s BBQ1. I conspired this just so I could try Sam’s stew and confirm that, yes, it is just as good.

Unfortunately, Sam’s does have it all over Dave’s in one regard: the sauces. The ones here are fine – there’s a more-tomato-than-vinegar sauce and a more-vinegar-than-tomato one, and they are each pretty good, but Sam’s has that amazingly delicious mustard sauce that I completely loved. Mind you, the pork is so moist and smoky that it would be fine without any sauce at all, but Sam’s is one of the best mustard sauces that I’ve ever had. Perhaps the next time that Sam and Dave meet up to talk about royalties owed by Atlantic Records, Dave should ask Sam about the mustard sauce, and Sam should ask Dave the name of his graphic designer. And each of them should ask their realtors to suggest a location that’s not in such a blighted, dead chunk of retail failure.