I see that it has been several months since I penned a chapter about one of my favorite soft drinks. Ironbeer is an absolutely delicious cola with a mild citrus flavor – I think of it as “orange cola,” although your mileage might vary – that was originally sold in Cuba. After that nation’s revolution in 1960, the company’s founders, in exile in Miami, restarted the business from the ground up and have slowly built a small following in Florida, Georgia and Alabama.

Not only did I stumble upon Ironbeer quite by accident, but the circumstances that allowed me to find it were accidental, too! One morning a few years ago, when I was working in Alpharetta, I woke up craving cantaloupe for breakfast, so I left about twenty minutes early, allowing me the time to swing by the Publix at Haynes Bridge and Old Milton Parkway. Leaving the produce section, I walked through the soda aisle, saw a lone six-pack of this unknown beverage, concluded instantly that I wanted to try it and took it along with me. I loved it, and went by the Publix in my neighborhood a few days later to ask whether they could order more.

The customer service department got in four six-packs almost immediately, which satisfied my need for a new novelty, and every so often I find it again in the soda aisles or the special request area. But the curious thing that they told me was this: the Alpharetta Publix was never supposed to have received that single six-pack. It came in on a truck by accident and should have ended up somewhere in north Florida.

Now what I’d like to know, Publix, is if accidental Ironbeer can be mistakenly shipped to suburban Atlanta stores and periodically restocked, why the heck can’t you get Buffalo Rock and Grapico from your Alabama and Columbus stores over here for me, too? 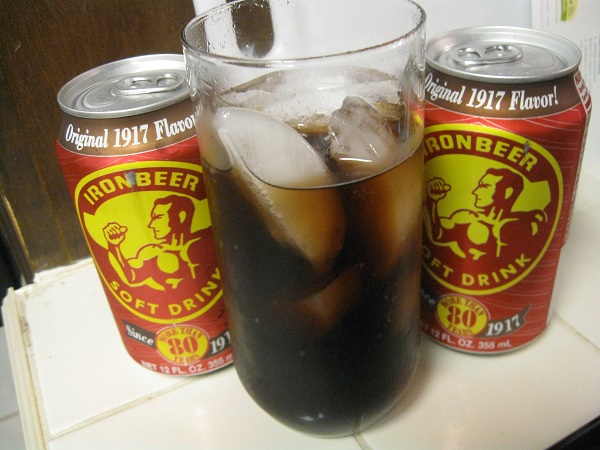 That Ironbeer was able to have its product accidentally shipped to a community in Atlanta that most people in Miami have probably never heard of is in itself pretty remarkable considering how close the company came to closing. In 1991, Ironbeer’s sister company, Sunshine Bottling, got into bed with Tropicana, which was looking for a new bottling company. Ironbeer then sank a lot of money into expanding Sunshine to get it ready for the demands of this really enormous contract.

Then one other tentacle of Tropicana’s gigantic business found itself owning a bottling plant and Sunshine wasn’t needed anymore. Tropicana’s people made a demand about the percentage of air in each can of their orange juice – an impossible demand, industry experts said, and one outside the terms of their contract – and extricated themselves from it. Ironbeer’s CEO, Pedro Blanco, sued Tropicana and eventually won a considerable sum for production costs and damages, but not before the huge legal bills sent Ironbeer into bankruptcy court. They emerged in 1999 a leaner, tougher company, and one that learned the hard way that the big beverage companies don’t ever, ever play nice with the little guy.

The little guy, after all, usually tastes better and, at least among crowds who enjoy interesting and fun flavors, often comes out on top. If you live in a community with a Publix, swing by and see whether they can’t get you some Ironbeer to taste!