Once upon a time, Atlanta was home to a pair of remarkably good sandwich shops where people could go for authentic Cuban food: Havana and Kool Korner. Then, across two terrible years, Kool Korner’s owner retired (only to move to Birmingham, get restless and reopen his beloved store) and Havana burned to the ground. Fortunately, around the time that Silvesonso Ramirez went back into business in Alabama, Debbie Benedit and her son Eddie Benedit Jr. reopened Havana using most of the same recipes that Eddie’s grandfather Guido had used when he first opened Havana on Buford Highway in 1976. Then there was, briefly, some bad blood boiling as Eddie’s uncle started his own sandwich shop with a very similar name. That’s all in the past now, but doing further reading of older stories about this restaurant – see the list below – will probably find traces of the family disagreements.

Earlier this month, the four of us went to join Leslie of The Food and Me for a too-short supper here. We didn’t get quite as much time to socialize, because, after entertaining us greatly with his ability to make a spectacular mess while Mommy fed him black beans, the baby announced that he was ready to go home, have a bottle and go to sleep. So we didn’t take up too much table space for too long. 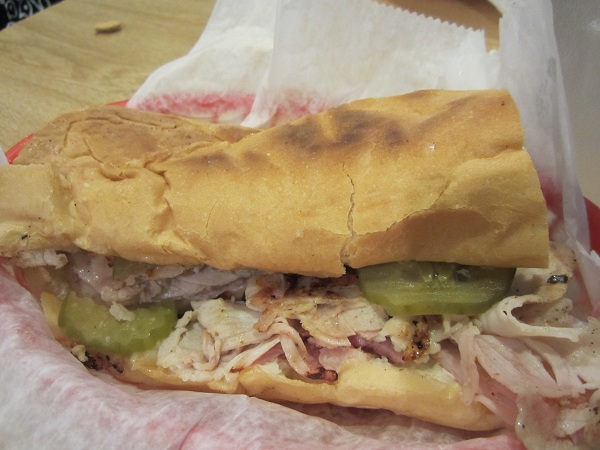 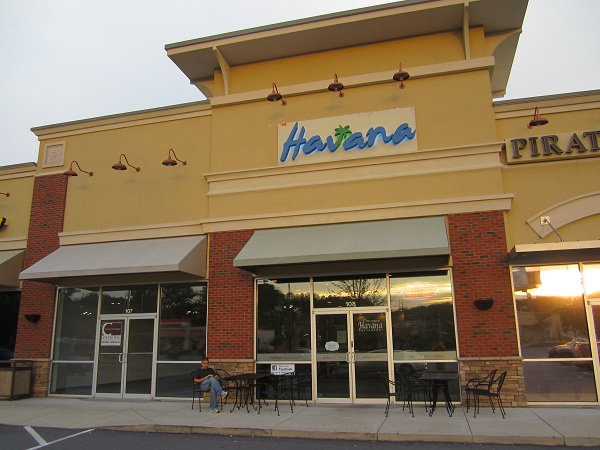 My daughter and Leslie each ordered Cuban sandwiches, and Marie had a medianoche, which is the same fillings but is served on sweet egg bread. I figured that I’d get something different from the ham and roast pork that everybody else was enjoying and had a picadillo sandwich instead. I didn’t enjoy it as much as I hoped, but the bite of my daughter’s Cuban convinced me that I was missing out. She wasn’t quite full after her sandwich and almost all of my rice – for nine dollars, you can get a combo with a full sandwich, a bowl of black bean soup and a healthy scoop of Spanish rice – so I ordered a second Cuban for she and I to split. They do a terrific job with it. The pressed, crispy bread blends very well with the melted cheese and tasty meats. It’s a very good sandwich at a good price. Leslie tells us that the chicken empandas are also something special; she got a carry-out order to enjoy later.

One additional plus to Havana is that, like the small chain of Papi’s restaurants around town, they offer a pretty wide range of imported sodas, including the completely fabulous Ironbeer. You can get Jarritos anywhere these days, but Ironbeer is still quite rare, and it’s among my nine or ten favorite sodas. Since I drink soda quite rarely anymore, it’s always a nice treat.

The toddler’s having impatience meltdowns more frequently than he used to. We hope that he’ll let us enjoy meals without worry again soon. As it was, he was ready to go outside, yell, and wave “bye-bye” to Leslie and to complete strangers very quickly. Fortunately, he left us blackmail-material photographs of his face smeared with black beans to memorialize him at his high school senior breakfast. It might take us sixteen years to get back at him for being such a little butt in public so often, but we will.

Other blog posts about Havana: