One of my other blogs is a tribute to the British comic 2000 AD, and I recently finished writing a story there about what we might term believable villainy. Meanwhile, at the intersection of Peachtree and 8th Street in Midtown, a new restaurant called Villains opened last month. It draws its design elements from unbelievable villainy, celebrating comic book arch-enemies and box office bad guys. If you’re looking for a place to meet up with another member of the Legion of Doom and discuss your nefarious schemes for global domination, then this might be the place for you.

It was also the place for me to meet up with Bella Vivere, who suggested that we try out the sandwiches here for lunch before she jetted off to Los Angeles for a few weeks’ vacation. The sandwiches come with an excellent pedigree; the restaurant is co-owned by Alex Brounstein, Jared Lee Pyles, and Jason McClure, each of whom previously owned or worked with the well-known Atlanta restaurants Grindhouse Killer Burgers, HD1, and Flip Burger. These places are similarly design-led in giving guests a memorable experience as well as some very good food.

Like any sensible bad guys, these Villains flexed their muscles with a pair of pop-up lunches, held in September and in January, to gain some notoriety and word of mouth before moving into a space previously occupied by a Little Azio outpost. It’s in the same little strip mall as Noodle and a T-Mobile store, and parking is free but limited. There’s a guard preventing people from using their spaces to go across the street. Or should that be “henchman,” or “minion,” I wonder. 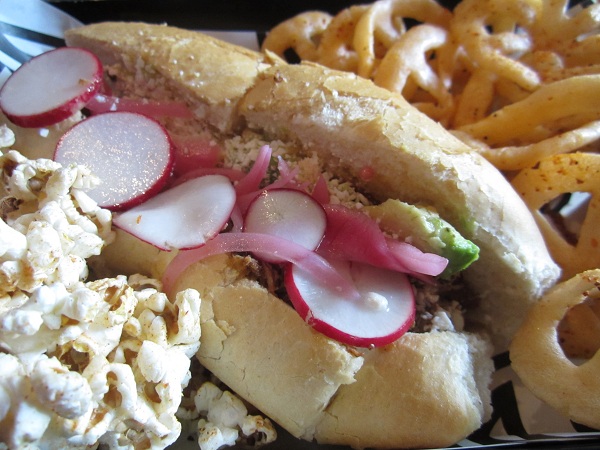 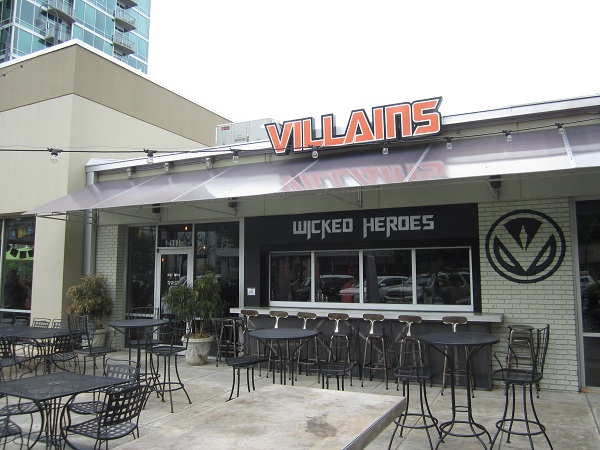 A place like this, with all the attendant buzz on foodie-friendly news sites like Eater and Omnivore, can’t help but get people reading the menu well in advance. Bella Vivere and I already had our sandwiches selected before we arrived at this edifice of evil. I wanted to try the El Guapo, despite never having actually seen the film Three Amigos, because the mix of pulled chicken, chorizo, black bean, avocado, onions, cheese and radishes sounded completely wonderful. I wasn’t disappointed. The prices are a little higher than suburban sandwich shops, but they make up for them with really inexpensive sides. I had both popcorn and veggie chicarrones for a buck each. The little wheels, called Disco Volante (I knew that I knew that name, but had to look it up) are sinfully addictive. Could’ve eaten my weight in those.

Bella Vivere ordered the Kingpig of Crime, its name tweaked ever so slightly from the pop-up version so that the trademark owner of a character created in ’67 by Stan Lee and John Romita might not get litigious – Villains, nuthin’, nobody’s more evil than Disney copyright lawyers – and was very pleased by the huge and crunchy treat that she received. Porchetta with crispy skin and arugula is stuffed into wonderful French bread. She said that she was in heaven, which is an awfully odd response to food as downright devilish as this.

Other ne’er-do-wells represented on the menu include the Vulture, Zartan, Megatron, Col. Kurtz (sort of a mean man’s banh mi), Bugsy Siegel, and Montgomery Burns, which features ribeye steak and horseradish brie. Many of these baddies have their nefarious silhouettes seared into the tabletops underneath a blackboard wherein some of them have been working out Moriarty-level algebra and plans for a death ray or something.

Honestly, the food here is very good and I’d love to visit again, and despite all the hilarious design elements, the only criminal thing here is the cost of soft drinks. Yeah, I normally just have water, but I was very pleased to spot cans of Ironbeer, which I adore. Then my wallet felt a little beaten after I shelled out three dollars for the little thing. Such villainy! The bad guys won that round, but next time, I’m coming with reinforcements.