So the baby and I were having a boys’ day out, which pretty much is going to mean driving around the country and eating. We made our way from Jasper across to I-75 at Calhoun, passing by the original location of the very good Bub-Ba-Q and enjoying a really pleasant hour or so. It was an overcast day and slightly misty; every so often, the old highway ducked into little valleys with old, craggy trees looming over the road. It sometimes didn’t look like Georgia, but like an old Hammer Horror film. The baby fell asleep, not appreciating the imagery.

About halfway to Calhoun, the road went through the town of Fairmount. About two years ago, when we drove up to try Edna’s Restaurant in Chatsworth, we crossed through Fairmount going north. I noticed again that pharmacy which didn’t know then when it was supposed to be serving lunch. A part of me felt like stopping to see whether they’d got their act together, but I drove on instead.

From Calhoun, I went south on I-75 six miles and got off at the Adairsville exit, # 306, and went west about a mile. I was aiming for Character’s, a barbecue place that has been recommended several times by several readers, including one of our regular commenters, Helen. In fact, I told Michael Character, who opened this little hut in 2007, that Helen, who lives in Huntsville and comes to Atlanta very frequently along this road, suggested I stop by, and Michael smiled real big and said “Oh, I know her! She likes my ribs! Tell her I said hello!” 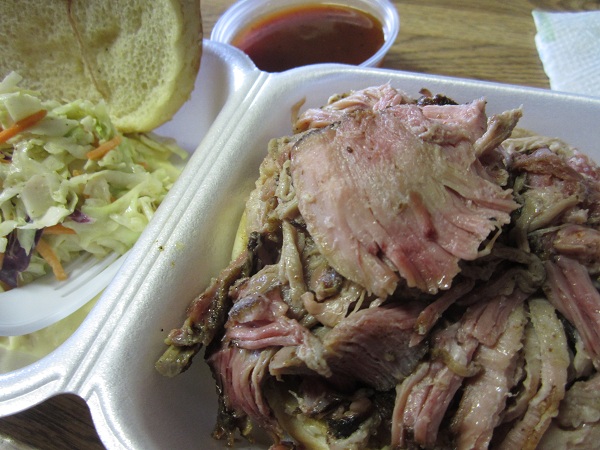 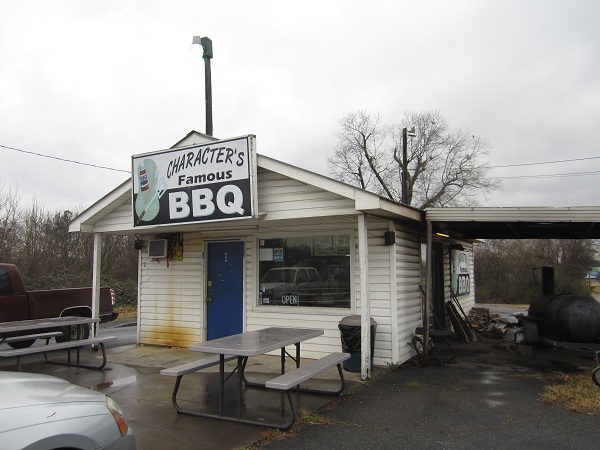 Quite a few of our readers seem to be traveling with small ones, and I’m afraid that I can’t say that Character’s is the most baby-friendly place that we’ve visited. He mainly does carry-out, and while he has a couple of tables inside, he not only doesn’t have any highchairs, but he doesn’t have any chairs with backs, either, just stools. I knew better than to ask whether he had a restroom with a changing table.

But I’ll tell you, if your baby loves barbecue as much as mine does, then he won’t mind standing up and eating, because this is a treat. I thought that the pork, smoked over hickory for just five to six hours, was quite good, but the baby enjoyed it even more than I did. He just gobbled down everything that I shared with him, demanding more. We taught him a little sign language, and he was pressing all his fingers together, signing “More, more!” with the desperation of somebody who’d finally found his favorite food after a lifetime of rice cakes or something. Well, I say everything, but he wasn’t happy about the slaw – open-minded, at least he keeps trying – but probably because he only has a very small stomach, and didn’t wish to waste valuable eating space on anything but barbecue.

If you stop by, make sure to get your sauce on the side, especially if you’re feeding a toddler. It is a thin and red tomato-vinegar-pepper mix, and it is surprisingly spicy in that nice way that feels hotter and hotter the more you eat. The baby got his fill of barbecue and bread and we both left quite pleased with the visit. Of course, we had to stop by the Quik Trip on the other side of the interstate to change his butt.

Character’s BBQ, while not really conducive to large groups or young’uns, is a really good stop for anybody traveling between Atlanta, Chattanooga, or northern Alabama. However, its hours can be a little unpredictable. Phone first, but definitely phone. Next time I’m in the area, I hope that he’s open so that I can get some of those ribs that Helen likes so much.