The first time that I ever tried Vietnamese cooking, it was a year and a half ago, when I went up to Jimmy Carter Boulevard, that well-meaning but generally ineffective avenue in the Norcross area, to visit the much talked-about Nam Phuong. I left with that curious feeling of being pleased but dissatisfied. The food that I ate was good, but I didn’t have anybody to share the experience with, and I just sort of had to hope for the best.

That’s kind of been the case with our limited experiences with Vietnamese cooking ever since. We’ve enjoyed a few bowls of pho, inasmuch as a big bowl of soup can be enjoyed, and really got a kick out of some fabulous and tasty bahn mi sandwiches, but we’ve been relying on other people’s online reports for some background and still never really knowing what to order, or what all’s in what we receive. What we’ve needed is somebody to dine with and share their expertise, tastes, and experience.

Enter Helen and Vincent, two of our regular commenters, who have been reading us for some time. They gave us a heads-up that they’d be in town, and invited us to dinner at Nam Phuong’s second location, on Buford Highway. This is one of their favorite Atlanta-area restaurants and we were so glad to have a little help in navigating Nam Phuong’s enormous menu, and also getting a few ideas about how best to eat some of these treats. Then, of course, I did some reading ahead of supper and had an idea about what I wanted, I found that, among all the rolls, there are two varieties. What I had ordered a few weeks previously at Pho Dai Loi # 2 are summer rolls, Goi cuon. These are typically tightly wrapped in rice paper and have shrimp and pork. The spring rolls, more like what you see in Happy-This-Golden-That Chinese joints, are called Cha gio. These were highly praised by Blissful Glutton Jennifer Zyman in her report on this restaurant (linked below). 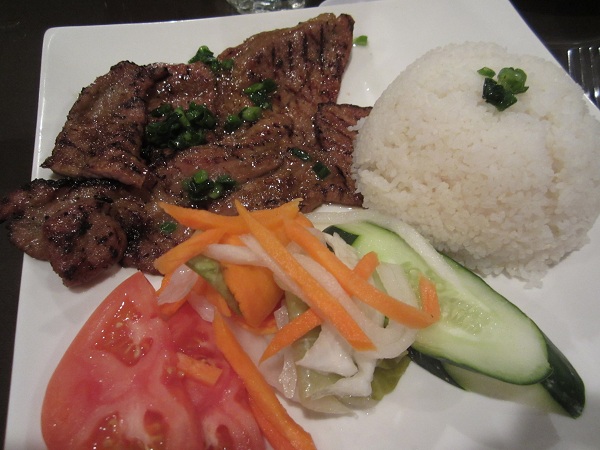 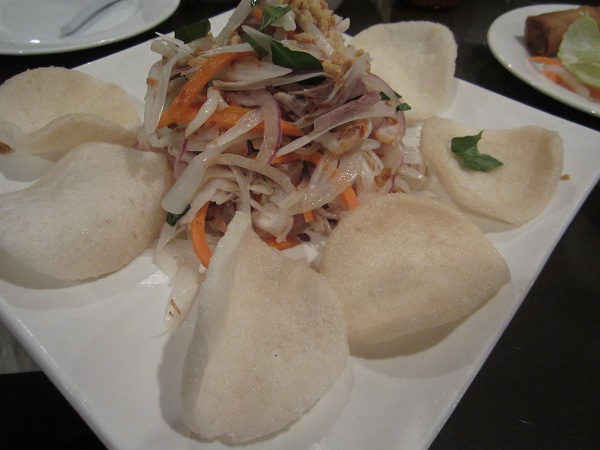 Now, you may recall that I was baffled by the sauce that Pho Dai Loi # 2 offered with its summer rolls. This is a thick brown sauce made with peanut butter, hoisin, water, lime juice, soy sauce and a few other things. I contend that I tasted chocolate when I tried that dish, but it’s entirely possible that I don’t have a clue what I’m talking about. I thought that the summer rolls would have gone better with a lighter sauce, and that’s what is typically served with the spring rolls, a “fish sauce” called nuoc mam. This is apparently a mix of your basic anchovies-and-sugar sauce seen in many Asian cuisines along with garlic, hoisin, and probably rice vinegar. I thought that the Cha gio that I had here were by some measure the best spring rolls that I’ve ever had, anywhere, and the light sauce went very well with them. Helen also ordered a lotus root salad (Goi ngo sen tom thit) for the table to share.

Still getting input from our hosts while remembering my perfunctory research, I decided to try com tam, broken rice, for the first time. This is a dish typically seen in southern Vietnam that uses rice that was damaged in cultivation or transport. There’s nothing wrong with the rice; it merely has a different texture, and consequently a subtly different taste, to regular rice. It is typically served with a salad and a protein, usually pork. 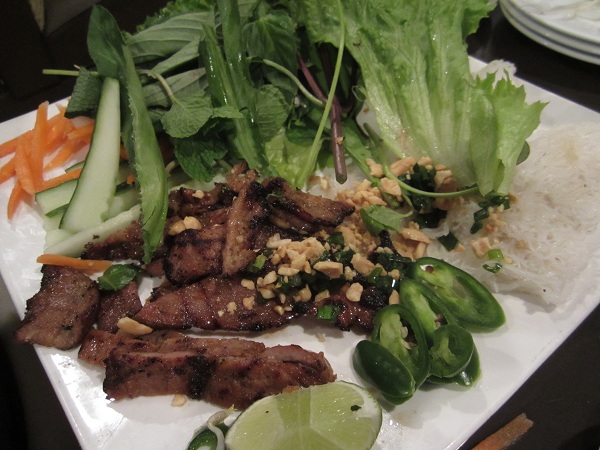 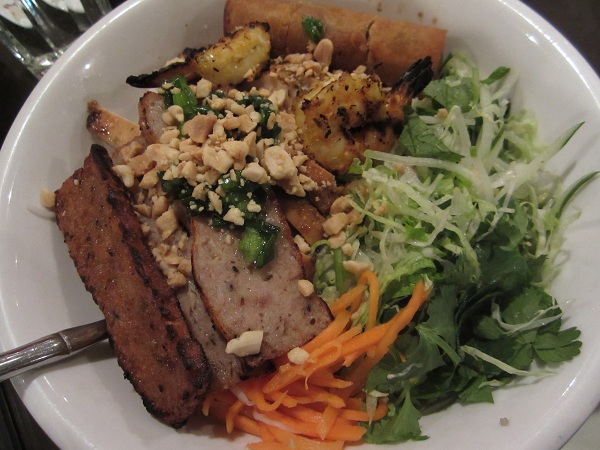 Vincent was good enough to demonstrate what to do with that forest of greenery that Vietnamese restaurants serve along with a bowl of pho. He usually orders the pho dac biêt at whichever Vietnamese joint they visit. Dac biêt is, effectively, “house special,” and it usually means “just about everything.” As with the pho dac biêt that Marie had ordered some months ago a little north up the road at Pho Bac, it was a big bowl of beef broth with a whole mess of sliced beef in it, from flank to tripe. It’s served with a dish of various herbs like basil and cilantro along with bean sprouts. Vincent prefers his pho with these, but guests can also add slices of jalapeno pepper or lime, or mix in some sriracha or hoisin.

Sticking, conceptually, with dac biêt, Marie ordered bun dac biêt, which is sliced meatballs, shrimp, barbecued chicken and spring rolls along with a light salad and crumbled peanuts over vermicelli rice noodles. She really enjoyed it. I had guessed wrong, and thought she might have gone with a crepe (Banh xeo), but she went with the mix of flavors instead and was very pleased.

We had a super evening out and ate very well. It’s always great to make new friends and learn more about food, and we hope to do it again soon.

Other blog posts about Nam Phuong: