One morning, as the girlchild was finishing up her long Christmas break, I cruelly woke her long before the sun rose and dragged her to work with me. This was one of my short days, and I needed to visit my bank after I finished up, and one of its few local branches is right off Buford Highway, on Shallowford.

The last several visits to this part of town, I had a meal at either a Korean or a Vietnamese restaurant, and it had been a while since I looked around for the best tacos available. I had half a mind, once I was done, to go back all the way to the southern end of the street and stop at the first Mexican place that was open, but practically right across the street, at 10.30 in the morning, the “open” sign at a grocery store blinked on, right next to signs promising tacos and tortas. Well, heck, let’s save a few fumes of gas and make life easy for us, I said. 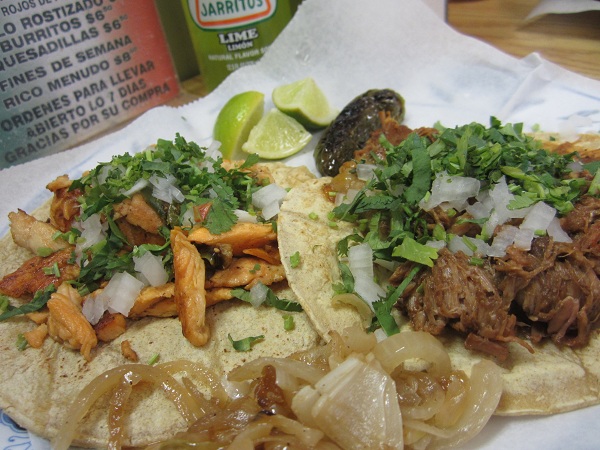 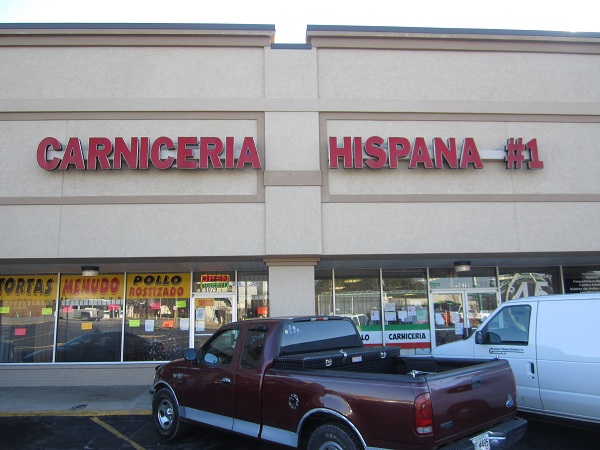 Nothing in the grocery store stood out as essential or so unusual that it can’t be obtained in Cobb, but we weren’t there to shop, anyway. We were there to chow down. Unfortunately, at lunch, they don’t provide quite as much for kids to chow down upon as they do at dinner. See, the girlchild is still struggling with her adventurous spirit, or lack thereof, and keeps defaulting to a simple quesadilla. This is the Mexican food equivalent of the grilled cheese sandwich on the kids’ menu, but it’s a shocking $6.50 here. I figured that’d be okay since it was supposed to come with a salad, rice and beans… but not at lunch. No, at lunch, they charge you the same price with none of the sides. Nice, guys.

To their credit, the two dollar tacos are really good. I had a “barbacoa” pork and a chicken, and I think that by now I have had quite enough “traditional” tacos from quite enough “traditional” restaurants in three different cities to know that, no matter in what combination I order them, I’m going to massively prefer the chicken taco to whatever other I get, whether it’s barbacoa, al pastor, asada, lengua, or tripa. So that’s enough. From now on, I’ll stick to chicken and stay happy.

The nice thing was that I gave my daughter a taste of the chicken and her eyes lit up. “That’s really, really good,” she said, and was right. It was far better, and far less expensive, than the cheese quesadilla. I’ll remind her of these, and the lunch that we had a few months previously at Tacos la Villa in Smyrna, the next time she thinks that I want to spend my money on something like this, and maybe, just maybe, I’ve broken her of this quesadilla nonsense.

Other blog posts about Carniceria Hispana: