Since I wrote about his very small, ramshackle restaurant two years ago, Michael Character of Adairsville GA has become a familiar face on TV’s BBQ Pitmasters. He and Unadilla’s Myron Mixon are often seen on that program kicking butt, taking names, and letting it be known to all, far and wide, that Georgia barbecue is a whole lot better than you lousy no-good so-n-sos in other states may think. They’re probably convincing a few more people than I am here with our li’l blog, what with the big television audience and all.

I was moved to go back for another lunch here when I learned that the restaurant had moved. His space is still tiny, and is mainly a carry-out lunch spot, but he’s about a mile away now, on US-41 just a little north of where he had been located, and has seating for about twenty-odd people. It’s on the north end of a small antique mall / flea market / junk store. Parking’s not an issue, but I instantly tired of dealing with a bunch of people driving wherever they want to because it’s a gravel lot and they just want to drive over every pebble in it.

When I last visited, Michael told me that our friend Helen really liked his ribs. She has not been able to visit for a long time, because he’s no longer open on Friday evenings, nor with a nebulous “when the food runs out” plan, but rather simply for lunch Wednesday through Saturday. So, since Helen couldn’t enjoy his ribs, I got a combo plate so that she could live vicariously through me. 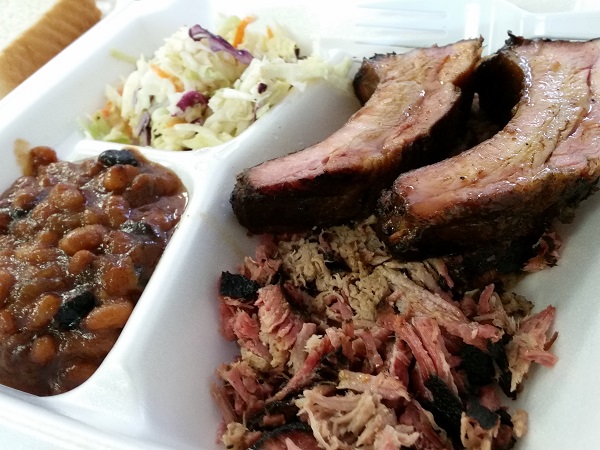 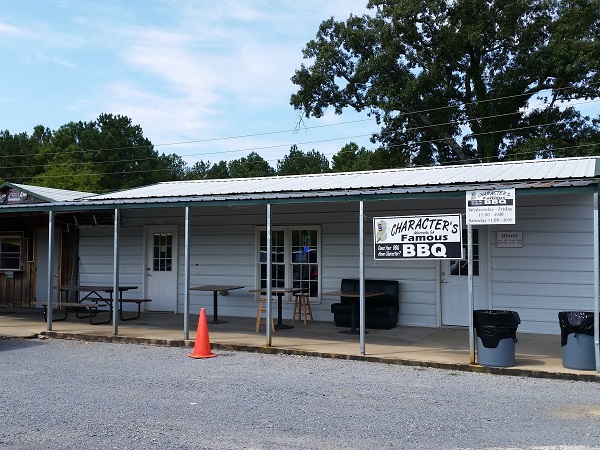 Character’s barbecue is really smoky and dry and downright wonderful. Make certain to ask for it without sauce, however. My daughter ordered a sandwich and had to go get a fork because there was so much sauce. The boychild had potato chips and most of my beans. I really did enjoy the ribs, which are peppery and with just the right amount of pull needed to clean the bones.

So is it worth the trip? Character’s is about forty minutes from our house in Marietta, and we’ve been known to sit in traffic longer than that getting to one of Atlanta’s best barbecue joints. It’s not a trip that I’m anxious to take regularly, but if you’re on this stretch of I-75 around lunchtime, it’s not much of a detour at all to come have some great chopped pork and ribs.