A short change of format today, good readers. I want to take a moment to spotlight a few behind-the-scenes things that you may not know.

First off, I want to make sure all of you know about our Community Walk maps. I’m fairly sure that many of you don’t – six weeks apart, two of our regular readers told us that they had no idea what I was talking about, which suggests that “regular” doesn’t quite translate into “including that bit in italics at the bottom of the story.”

So I mentioned this to our Facebook readers, and some of them commented that they didn’t know about this feature either. So here they are. We have two maps which I update along with new posts about a restaurant. They’re intended for travelers to get some ideas where to eat along the way, particularly those of you wondering what might be found along a major interstate in our travel radius. Each dot on the map pulls up a box with the business address, and a link to our story that’s centered around the joint. The main one looks like this, and if you’d like to scroll around and play with it, click the image below and go see it. 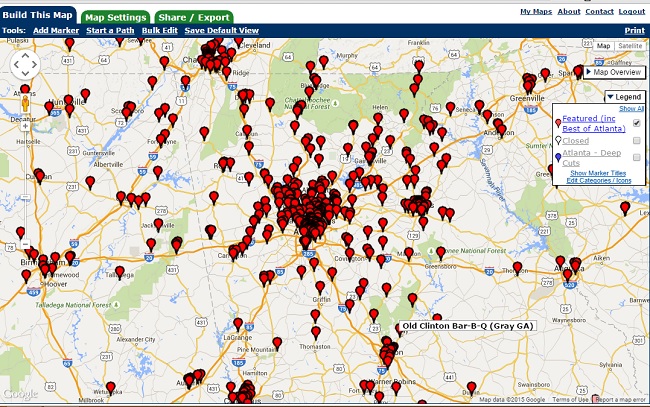 Unfortunately, as you can see even if you are just looking here and not clicking through to the actual map, the metro Atlanta area is an almighty cluster of little red dots. That’s because we’ve written stories about 692 places to eat around this town! Many of them have closed (you can see those by selecting the “Closed” box in the legend on the right-hand side of the page), but it was still incredibly unwieldy, so I changed things up a little last month, and moved more than half of the Atlanta-area restaurants into a separate category called “Atlanta – Deep Cuts.”

The other map is our barbecue-specific one. It’s much easier on your eye, with only around 340 dots around the southeast at this time. Here’s what North Carolina looks like. Heck, we need to head that way again soon and add more dots, don’t we? Again, click the image to pull up the map and play around with it. It’s lots of fun! 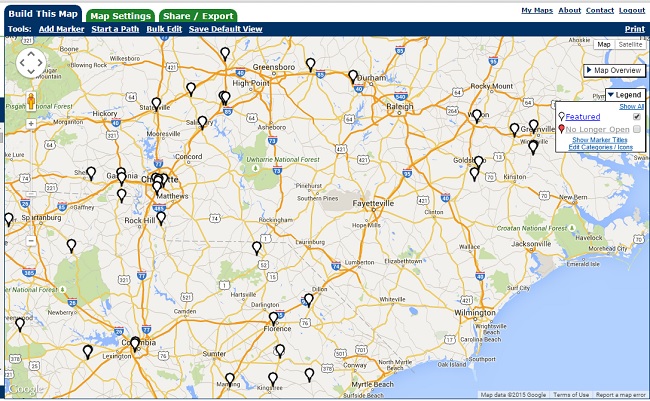 So I mentioned Facebook up above, and this should be a good place to remind readers that we do have a page that I try to keep a little interesting. When we have new content, we provide a link for that at 8:05 EST each morning. Then at 2:05, there’s usually either a link to some other blog’s writeup about a favorite place, or some neat-sounding news, or some PR about a place that we have featured. We don’t make nuisances of ourselves with any more than that, but Facebook is also really, really, deliberately awful about actually letting all our readers see these updates. So if you’ve “liked” us on Facebook, please remember to select “Get Notifications” so that you’ll see more of our content.

And tell your friends! That, too!

This brings me to the really big change, and that’s the loss of Urbanspoon.

I wrote a story about this two months ago for the Association of Food Bloggers (and you should totally go read it!) but I kind of needed to make that an even-tempered report, so I moderated my feelings a great deal. A few months later, I am still deeply disappointed with how badly Zomato has managed the purchase of Urbanspoon, and very annoyed by the loss of many of the features that were so useful for the work we do.

I don’t deny enjoying the little ego boost that came with our ranking on the various regional leaderboards, and we certainly enjoyed the spirited competition that came from it. Urbanspoon ranked everything in a metro, no matter how old it was, no matter whether the restaurant was the most popular in town or a McDonald’s that closed eight years ago, by how many views that page on Urbanspoon – and, consequently, eyeballs on the link to your blog – received, divided by the number of bloggers that had written about the place. This encouraged everybody in a market to spread their wings and find new places to eat and share with their readers, and it also rewarded consistency and volume. Even if, over time, many great writers in a market slowed down their efforts, they still ranked highly on the boards, as they should, for the body of work they had built.

Zomato’s current model is simply “most number of blog posts in the last six months.” It doesn’t reward a body of work, and it doesn’t reward writers for searching for new content that nobody else has shared, because any restaurant will do. It measures speed, but not focus, volume, or breadth. That sort of “number one” is not an award that we need, which is one of the many reasons that we stopped linking to Zomato.

Another is the breathtakingly poor customer service. Another is the inability to edit errors. Another is the inability to find all the newest restaurants in an area. And there are so many others… literally in the last week, an online acquaintance from the Urbanspoon days made the remarkable announcement that Zomato was actually declining to remove a potentially libelous drive-by “review” from somebody who was making impossible-to-prove claims about public health and safety about a restaurant, and said that if the restaurant’s owner wanted to respond to the claim, then they were free to do that. If Zomato isn’t even going to police its own “user reviews” to filter out grudges, innuendo, and trash like that, then Zomato is not worth using and I wish nothing but the immediate closure of the entire site. Idiots.

Of importance to people who enjoy food blogs, here’s another great flaw in Zomato’s model: there are no leaderboards at all for secondary or tertiary markets like Augusta, Macon, Valdosta, or Dothan. Since these smaller towns don’t have a local food blogger culture, they rely on tourists who stop by on their way to some other city to write about their restaurants. (“Rely” is possibly entirely the wrong verb for that sentence.) Over time, writers like us and our friends from Sweet Tea & Bourbon and Burgers, Barbecue and Everything Else, among others, have built up small collections of stories from restaurants in cities of that size. Now, sure, if I’m familiar with the blog, it’s easy to look up towns or regions within that blog. But the leaderboards were a million times more useful in finding blogs that we didn’t know about, and, through them, great restaurants to visit.

And so, concluding that Zomato was massively inferior to Urbanspoon for the way we wanted to use it, we have hitched our wagon to Tabelog, which, to be clear, is also massively inferior to Urbanspoon. However, and this is critical: Tabelog is open-minded and easier to use, the customer service is leagues superior, and users can make edits when errors are found. It still doesn’t have leaderboards, and maybe never will, but I’d much rather send traffic to a company that is run with an upbeat, fun, approachable touch than refer our readers to Zomato.

Tabelog has a long way to go. It’s flawed, it’s missing scores of restaurants, closures don’t seem to get reported very promptly, and I don’t enjoy spending time editing our blog posts, as they appear there, down to a paragraph and a link, which is getting REALLY boring. (The whole point of reciprocal links is to send traffic each other’s way!) But, for better or for worse, acknowledging that we really don’t need either Zomato or Tabelog to grow, I am much happier affiliating with the friendlier and more fun company.

Perhaps time will show that was the wrong decision, and if it does, I’ll just slowly delete all the darn links entirely. But my fingers are crossed for Tabelog. I encourage all my friends who blog to give them a try, and give them feedback, and all our readers to check them out. That’s Tabelog.us – the .com version goes to their original site in Japan.

(That said, our posts may not always have Tabelog links. I’ve added dozens of restaurants to their database, but I’ve kind of hit the point where they’ve had enough of my unpaid labor. Tabelog sends us very, very little traffic, especially in comparison to Urbanspoon; there’s a limit to how much work I wish to do without reward.)

(Update 2017: Of course Tabelog US didn’t last. Always hitching my horse to the wrong cart, me.)

Finally, since we’ve established that the bits in italics at the bottom of the entries aren’t bein’ read, it’s entirely possible that you don’t know about my incredibly fun other blog. It is called Fire-Breathing Dimetrodon Time. We’re sitting down with the boychild to watch classic adventure shows and 1970s live-action Saturday morning stuff and writing about what we think about the experience. It’s a little heavier on my thoughts than it is his thoughts, because he’s four and doesn’t articulate all that well yet, but we’re having a blast. If you enjoy Sid & Marty Krofft or Filmation, Adam West Batman, or Gerry Anderson’s Supermarionation, you should give it a read! As our son gets a little older, we’ll add some more fun old stuff to the lineup, including Doctor Who and Ultraman and The Avengers!

(And if you don’t know what the name Fire-Breathing Dimetrodon Time refers to… well, you’ll just have to read along until we get to that episode of that show where such a beast is revealed, won’t you?)

I think that’s all the backstage stuff that needs discussing right now. As always, we welcome your comments and feedback, and your suggestions of where to eat, and your letters to the president of Mobil suggesting us for a gigantic grant so we can quit our jobs and drive around the country in a big RV eating and writing about it. If you don’t have the address of Mobil, then we’ll very happily take you telling your friends about us instead. More readers, more Facebook likes, and more Twitter followers are pretty darn nice compliments. Thanks for reading, and check back this week for some more Atlanta-area stories before the blog spends most of October talking about Florida.

Readers! Did you know that you can occasionally find stuff in these bits in italics? Not today, but sometimes! Don’t forget to look down here, too! You might forget about one of our maps or something and could use a reminder!

4 thoughts on “Maps and Legends”