In the previous chapter, I mentioned that David and the kids and I went up to Chattanooga to do a little book shopping. David was not really tempted by my suggestion of a visit to Zarzour’s Cafe, and so we went to Couch’s to try a new-to-us barbecue place. I did not want to go up there without also getting a snack from one of the city’s more popular restaurants, and so after we spent some time at McKay and at another wonderful store, The Book Company, where I found (I believe) all the remaining Harry Kemelman Rabbi novels that I have yet to read for about a buck and a quarter each, we drove downtown.

I made certain that I took David on a short detour to the Gas-n-Go on Dodds Avenue where I used to pick up cans of Double Cola. I think they installed new bars over the windows. David was very curious about the crumbling edifice of a nearby Chinese restaurant called Yum-Yum, which is somehow still in business despite looking like the building was constructed in the 1960s, when it was fashionable in this country for Chinese restaurants to look like tacky impressions of Shaolin temples, and then left to the elements for fifty years. I can’t find any reviews or information on this place online, but there were two cars in the lot and a sign lit in a window. This might bear further investigation one day.

Downtown Chattanooga is really fun and vibrant and the area of walking activity is much larger than Atlanta’s comparatively smaller downtown district. It stretches across the river by way of a beautiful pedestrian bridge to the North Shore neighborhood. Marie and I drove through this last summer when we visited Aretha Frankenstein’s and we commented then how fun and cute it looked. Street parking is a bit of a challenge here, but it’s very reasonable at 75 cents for an hour. We later spotted a larger parking deck behind the Regions Bank, so that’s worth looking out for the next time we’re in the area. There are quite a few trendy and popular restaurants in North Shore, and lots of great-looking places to get a snack, but the most promising was Good Dog. 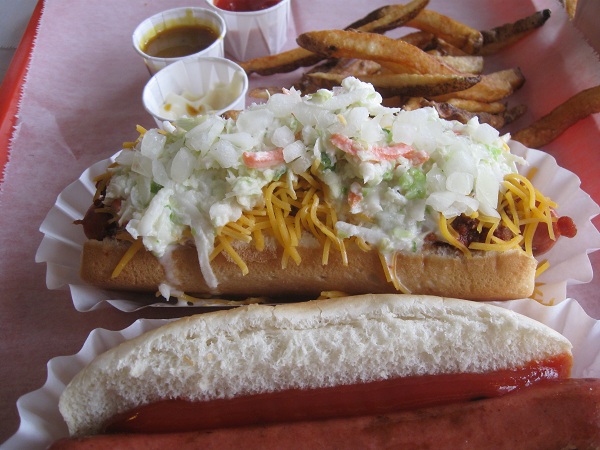 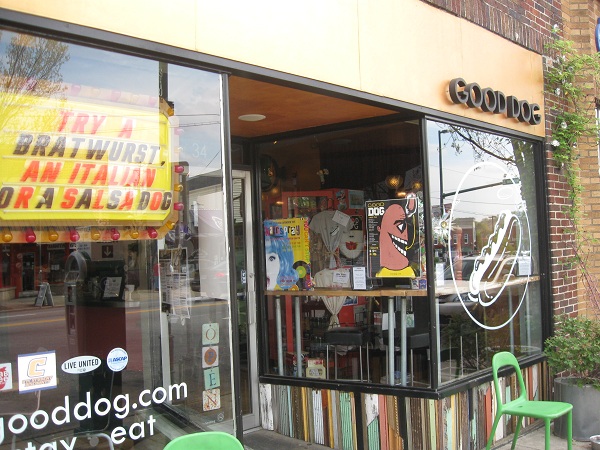 My readers in Atlanta are hopefully familiar with America’s Top Dog, which has been wowing guests on the northeast side of town with a number of really terrific dogs served up in every conceivable regional variation. Good Dog shoots for a similar experience. They’re not quite as inclusive as the Atlanta competition – they don’t offer half-smokes or Cincinnati chili or a topping bar anything like what we have here – but they knock it out of the park in many other ways. The only real strike against America’s Top Dog is its terrible location in a dying, pedestrian-unfriendly Big Lots strip mall. Good Dog is lucky enough to be in a town with such a vibrant and thriving neighborhood, with lots of foot traffic. This is an area where there is simply lots to do and, if you have the time, the opportunity to spend hours just wandering around the riverwalk, the park and the lovely bridge, enjoying the gorgeous spring weather and the sunshine with dozens of other people.

At any rate, Good Dog offers several regional specialties, and even goes far afield for what they call a Dutch Dog, which is topped with fries (“frites“) and their mayo-vinegar condiment (“fritesaus“). When told about this, my half-Dutch wife was a little skeptical as to how traditional that’s supposed to be, but I’ll give Good Dog the benefit of the doubt, as Good Dog’s owner is also half-Dutch! I went full-bore, however, with a big and messy chili cheese slaw dog, with mustard and onions, and enjoyed the hell out of it. The dog had that absolutely satisfying pop of the casing and everything tasted fantastic.

The fries, served in a paper cone that fits into holes in the table, were also really good. They have a small condiment bar, so you can load up on frites sauce, hot sauces, honey mustard or several ketchups, including a thick curry ketchup that was pretty tasty and not too spicy, and a wasabi ketchup that the kids and I enjoyed the most.

Some months ago, the cartoonist Kate Beaton, whose work I adore, started a small controversy among the more dimwitted members of comic fandom when she said she didn’t appreciate the sentiment expressed by a reader who said something along the lines of how he loved her artwork so much that he wanted to marry it and have babies with it, or something. I was reminded then of how my daughter said much the same thing about a bowl of noodles that she had at The Grit in Athens, and she expressed something similar at Good Dog over her cupcake. Tween girls evidently talk like this. Perhaps Kate Beaton should have complained less about perceived sexism and more about grown men talking like twelve year-old girls. Anyway, so my daughter started bellowing about her red velvet cupcake. “This is SO GOOD that I want to MARRY IT and have LITTLE CUPCAKE BABIES in MY STOMACH! Can I do that?”

“I don’t know whether that’s legal in Tennessee. You’ll have to ask the staff,” I said. And she did. I believe that we have a standing invitation to return and let them know how the little cupcake babies are doing. If you were to ask my daughter, she’ll say that Good Dog has it all over America’s Top Dog, because she just cares to have a plain dog with ketchup and doesn’t care for the bells and whistles. But this place has cupcakes, and ones good enough to marry.

Other blog posts about Good Dog: