So last week, I convinced David to leave the state. This has not happened in a while, as David doesn’t travel nearly as often as he should. It’s good for the soul, travel. My kids were on spring break and getting cabin fever and doing that really dumb thing that immature people do with money, which is to realize that they have some of it and must exchange it for something else immediately before they spontaneously combust.

So this was going to cause a little consternation in at least one quarter, because I was able to tempt David out of Georgia by telling him about McKay, this downright remarkable chain of bookstores with three locations in Tennessee. As near as I can remember, we’ve never had a store quite this good and quite this huge in Atlanta, and McKay has never had two more miserable children in it than mine, penniless and heartbroken that they’d spent all their money already. For a while there, Oxford Too came pretty close to being as good as this store, but no, McKay is even bigger. They have a constant stream of product arriving, and employ more staff in the back room with the conveyor belts and computers checking new cast-off treasures and junk from sellers than any half-dozen stores in Atlanta employ, combined. And they still buy used CDs at a reasonable price. I don’t know whether you’ve actually tried selling any used CDs in Atlanta lately, but last year I decided that I had about a thousand more than I really needed, and getting rid of them in this city was a great big freaking headache. Two stores declined to buy anything whatsoever from me because they knew they would be shutting down within a few months. It’s tough out there.

Well, with McKay doing great big booming business simply by being enormous, fair-priced and willing to buy damn near anything with a bar code on it, it’s turned Chattanooga into a destination for people, like David, who also have far more things than they really need. So he loaded up the trunk of his car, picked up the kids and me, and we headed up I-75 to do a little selling and shopping, and try a couple of unfamiliar restaurants while we were there. 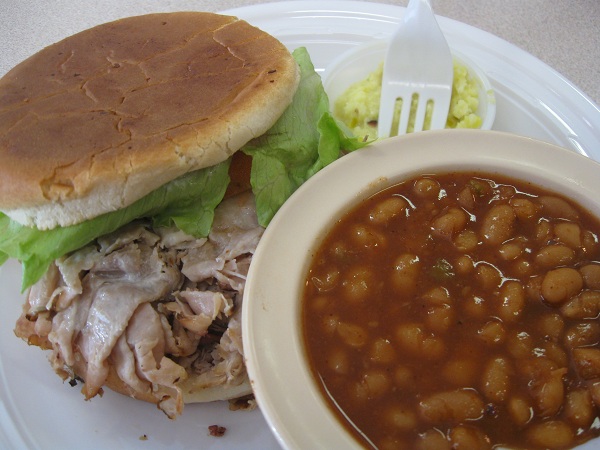 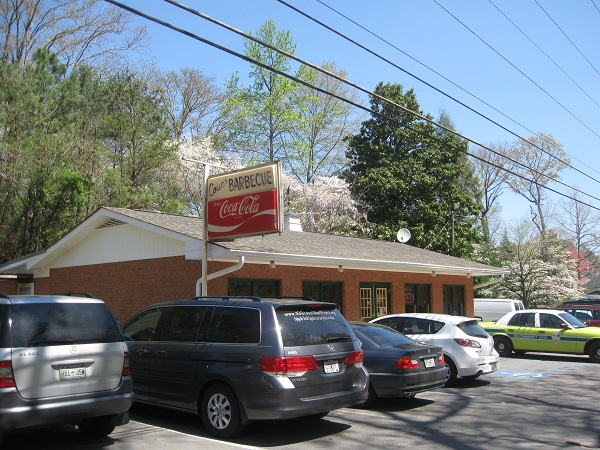 Couch’s Barbecue is absolutely the sort of place that I had been hoping that we would uncover and talk about over the course of doing this blog, and I wish that Marie had been with us when we found it. The great joy of eating out and looking for new places should be finding things on the menu that nobody else makes, and, since 1946, Couch’s has been doing something that I have never seen any other barbecue place do. They smoke uncured hams – not shoulders or butts – for fourteen hours and then serve their pork in shaved slices like you might get from the deli. They also do sliced beef and chicken this way.

The resulting sandwich is quite surprising, served as it is on a toasted bun with mayo, lettuce, tomato and slaw. That’s already just not like how anybody else does it, but then they ramp up the unique presentation. Almost universally in barbecue restaurants, when a guest is asked whether they’d like mild or hot, they are being asked about the spice level of the sauce. But at Couch’s, they’re asking about the slaw. The mild slaw is white and has a very pleasant and creamy taste. The yellow slaw is unlike anything I have ever tried before. It has a smell-the-back-of-your-brain kick and leaves a sharp and very strong aftertaste. It is all kinds of fantastic. I have no idea what is in it. I am absolutely clueless.

The owner, Kenny Stiner, stopped by and asked how everything was. I told him that I’ve never had anything like this hot slaw before. “Tell me about it,” I suggested. “It’s hot,” he said with a laugh, declining to be drawn in.

After we finished, I read a framed article from a 2004 issue of Chile Pepper, which gave Couch’s a write-up in their annual barbecue issue. Its writer, who presumably knows far more about food and ingredients and secret recipes than I do, was similarly stumped by the slaw, and similarly unable to glean any information from Mr. Stiner about it, learning only that he mixes it up in the morning before any other staff arrives. I’d link you to the article, only Chile Pepper magazine has the single worst web presence of any magazine on the planet, and such a thing is not possible.

The restaurant is really a neat place. It effortlessly evokes a timelost business from decades past with its checkerboard floor and Coca-Cola memorabilia over the walls. We arrived a little after 12 and it was almost full, prompting a longer-than-expected wait for our orders as the kitchen got backed up. The kids and I each had a pork sandwich, and also enjoyed some pretty good sides of baked beans, fries and mashed potatoes. David had beef and fried okra.

In another surprising variation on what you find at barbecue joints, they don’t serve any stew here. Perhaps they should; I can’t call the sides any better than “pretty good” because they did have the feel of the truck about them. Mr. Stiner confirmed as much when the table behind ours complimented him on their order of fried pickles and he fessed up that those came from Sysco. (“He said the S Word!”) This was the second time in one week that I heard an otherwise good, original barbecue restaurant confessing to the use of Sysco. Really, I know that costs are high and restaurants have to scrimp and save, but a place with such a unique approach to both barbecued pork and slaw would surely be able to come up with wonders across the board in the kitchen, and not worry about getting anything from that truck besides to-go cups and plastic forks.

After we ate, I went to take the requisite photos of the restaurant. This wasn’t easy, as there were so many cars in front. I decided to pop across the road and shoot from the drainage ditch on the other side. The resulting photos turned out worse than the one I did in the parking lot, but the children laughed for four minutes. There’s evidently nothing funnier than seeing your old man in a ditch.