For a couple of years, I’ve been curious about a dive bar on Frazier along Chattanooga’s North Shore, right where we turn to go down to Coolidge Park. On this latest trip to the Scenic City, it finally won out and I decided to give it a try, in spite of some quite negative reviews elsewhere. Normally, I don’t pay much attention to these, but some of them were really strongly negative, to the point where I would feel bad taking Marie and the children there knowing that a letdown had been foretold. So I came up with a plan B. Marie and the girlchild would each pick a place where they wanted to eat, old or new, anywhere along the corridor, and we’d visit three restaurants that way.

The girlchild did not take a lot of time to come up with Julie Darling Donuts, and I instantly agreed. I would be perfectly pleased to buy her two doughnuts for lunch. The budget appreciated that tremendously. She was aggravated that the banana split doughnut had a red gumdrop in place of a cherry, but otherwise she enjoyed that and the strawberry doughnut very much.

Marie picked Good Dog, which we’d visited without her in the spring of 2011 and pointed out on subsequent visits as being very good. Marie loves hot dogs and speaks Dutch conversationally, so she had a good time translating some of the slogans on the walls around the restaurant. Helpful hint: if you identify the phrase above the register as “eat deliciously,” then you’ll get a free sticker. 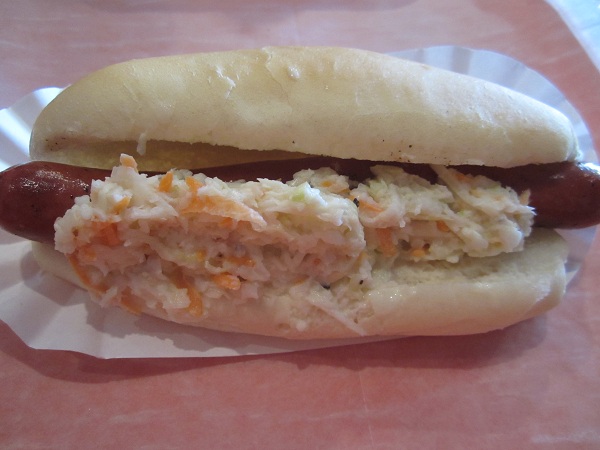 Marie just had a slaw dog, which she really enjoyed, and the toddler had a plain dog with ketchup. They have a few other ketchup-based sauces on the tables, and a mayo-based sauce chilling in bottles by the soda machine, and while I feel the cost of an order of “frites” is a little high, a small one, served in a cone that fits into a little hole on the table, is just enough for two with light appetites. Good Dog gets packed full of families with babies and toddlers on summer Saturdays. Navigating the line and all the strollers and all the highchairs might just test your patience a little, but the dogs are indeed good, and worth the trouble.

Speaking of toddlers, after we shopped for a little in a terrific, albeit dog-packed, used book and record store called Winder Binder, we bumped into another toddler who was wearing the same shirt as our boy, and very similar sandals as well. We made a little small talk as we walked down to the place where I would eat, an atmospheric dive bar called the North Chatt Cat. Here we met my concern: earlier this year, a new and very readable blog got started in the Scenic City. Chattaburger is a narrative of three friends going out for lunches and scoring their meals on a quest for the town’s best burger. Their review of North Chatt Cat is particularly harsh. On the other hand, Chattavore, the leading blogger in the city, thought that it was an impressive example of a greasy spoon burger. 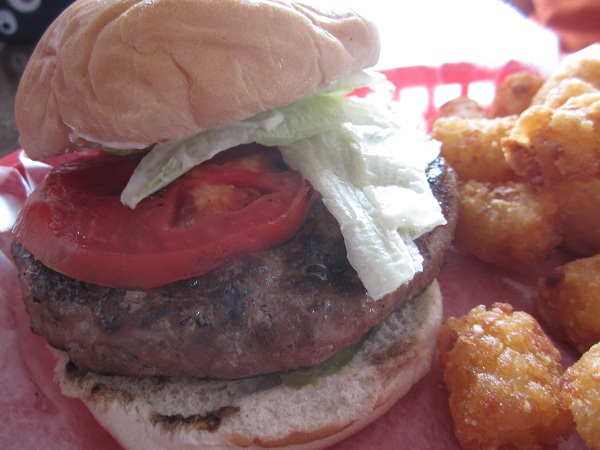 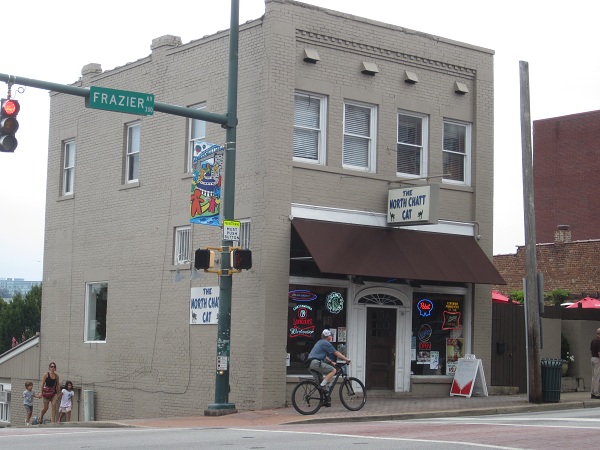 Well, I like greasy spoon burgers just fine, albeit somewhat more than Marie does, which is why I hinted that she might be happier with a meal elsewhere. I had a burger with a side of tots and didn’t eat them, passing them to the girlchild instead. The fellows from Chattaburger are correct that this sandwich starts as a frozen patty, and is therefore starting a few paces behind everybody else in the race. But somebody must have been asleep at the grill when they went, because the burger I got was as good as a greasy spoon burger can be. It was gooey and juicy and incredibly flavorful, and I enjoyed the daylights out of it. I’m not certain why it took so darn long to cook it – the joint was hardly busy when we arrived, a far cry from the madness of Good Dog – but it took close to twenty minutes to get my order. It was worth the wait, a perfectly good burger served up in a quiet getaway of a building that I realized, after thinking about it, that my dad would have enjoyed. This was his kinda place.

After our lunches, it was time to play. We walked back to Coolidge Park to let the baby have a blast in the fountain with lots of other kids. We all got a little wet, and he got completely drenched, running around and having the biggest time possible. This kid loves to have fun, all the time. We were there for almost an hour of high-volume silliness. If you have kids and you’ve not brought them to Coolidge Park, what are you waiting for?

We called it an afternoon after a few raindrops came down. It turned out to be a false alarm, but the baby was winding down anyway. He protested getting dried off, but not too loudly, and then we went looking for barbecue. There’s just no sense in visiting Tennessee and not finding some barbecue. I wanted to see a little more of the areas outside Chattanooga’s city center than we’d seen before, so I used Urbanspoon’s maps to pick a place in the northern suburb of Hixson called Dixie BBQ. Marie, our intrepid navigator, made a mistake on the way up that turned into a detour, but it was quite a happy accident. If you take Hixson Pike north and take a right at North Access Road, it takes you over to the shore of the Tennessee River at the Chickamauga Dam and an awesome railroad bridge. I loved seeing those, even if I was a little concerned about how far out of the way we’d gone. Fortunately, our intrepid navigator unpacked Siri, and she got us to where we needed to be. 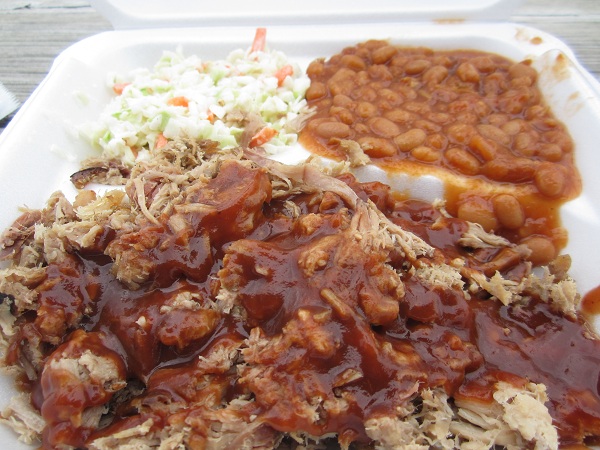 Dixie BBQ is a little trailer in a gravel lot that mainly handles carry-out orders, but they do have some picnic tables for travelers like us. It was originally opened in 1996, and I believe was sold to the Sanford family some years ago. The barbecue is about what you’d expect for the region. It’s good chopped pork smoked over hickory, served with a ladle of mildly sweet brown sauce and a choice of several sides. I went with slaw, which my daughter ate, and BBQ beans, which I’d intended for the toddler to have, but he was too wild and busy to sit still long enough to sample. He didn’t even want more than a nibble of the Texas toast.

One unfortunate note for us is that there’s a little unpleasantness about Dixie’s setup that might send most travelers back to their cars to eat, no matter how much their energy-packed toddler wants to run around. The meat is so flavorful and smoked just right, but any hint of smoke flavor is completely buried outside when the wind shifted and we got a noseful of the overflowing trash cans. The young ladies who were working the trailer did an exemplary job with food preparation, but they really needed to step up between visitors and get their property cleaned up. I found myself briefly wishing that we had a home in Hixson to take this good food to eat. Why it didn’t occur to me to eat in the car, I couldn’t tell you. The fountains at Coolidge Park must have washed the common sense out from between my ears.

Having eaten very well, we still had some desserts waiting for us, and sodas to bring home, so we buckled up the baby and filled up the gas tank ($3.24 in Hixson versus $3.53 back home in Marietta) and drove back down the pike, skipping the detour, for some more treats.

8 thoughts on “Old Favorites and New in Chattanooga”