Devotees of fast food retail in Georgia may recall that, prior to Del Taco’s cautious re-emergence in Georgia two years ago, the chain was last seen (from c. 1996-2003) in a half-dozen shared-space locations, joint-menu joints with Mrs. Winner’s. None of these were located anywhere near convenient to where I lived during that period, but there was one in Woodstock on GA-92. In the spring of 2003, I moved – at the time, it was just me, the girlchild, and the rarely-seen older teenage boy – to our current digs in Kenne-rietta, a few exits south of this store. That very first weekend, I drove the children up here for supper, only to find that the franchisee had ended the long experiment a couple of weeks previously, and left these RTM-owned stores selling Mrs. Winner’s chicken only. (There’s a good overview of Del Taco’s history in Georgia at Sky City, if you haven’t already seen it.)

Del Taco opened three stores in Georgia in 2012 (in Snellville, Kennesaw, and Smyrna), and then confounded industry watchers and hobbyists by staying quiet in 2013. A fourth was almost ready to be announced just off the Marietta Square in late 2012, but the company decided that the building, previously a Krystal, required too many improvements and the sale was canceled. (This building was then demolished and a Starbucks opened in its place.) A Del Taco manager then told me that they were soon to announce a location in Marietta, on Johnson Ferry near Lower Roswell Road, but this also fell through.

This year, at least two should be opening. The first of these, later this month, will be on GA-92 in Woodstock, less than a quarter of a mile from the Mrs. Winner’s combo store that closed in 2003. A second, not too far from the existing Smyrna store, is said to be opening on the East-West Connector near South Cobb Drive in April. These new stores will be serving up Del Taco’s delicious new menu item, ground turkey tacos. These are fantastic. 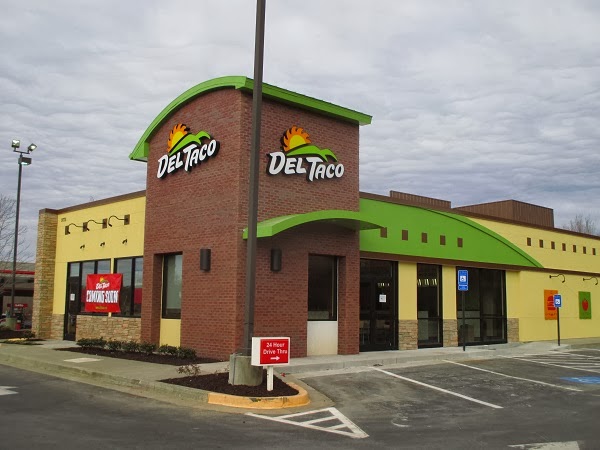 The company rolled out the turkey tacos on January 6, and claim to be the first Mexican fast food chain to offer ground turkey as a protein option. The tacos feature “seasoned ground turkey that has 33 percent less fat than its seasoned beef yet offers the same craveable flavor.” Each taco has only 150 calories. They’re also offering a turkey version of their “CrunchTada” tostada. The standard ground beef tacos are $1 apiece, and the ground turkey versions are priced just a little higher at $1.29. They also have a $5 meal with two tacos, a drink, and a bag of chips with a cup of pico de gallo.

Del Taco’s PR firm sent me a $5 gift card to try their new turkey tacos. Now, I should point out that, if you’re new to our blog, you may not know that I freaking love Del Taco. It’s the only national fast food chain that I frequent. (Although, technically, the company claims that Del Taco has 547 restaurants in eighteen states serving more than three million guests each week, and eighteen states makes it more regional than national in my playbook…) I am loud and proud about my love for their seasoned ground beef. I eat at the Kennesaw store once every five weeks or so. It’s terrific. And strike me if the ground turkey doesn’t taste even better. Marie hasn’t quite succumbed to the awesomeness of Del Taco, but I figured rightly that she would find these interesting. A second trip to the Kennesaw store saw her a little disappointed that they weren’t selling turkey burritos yet. Marie doesn’t care for the crunch of either tostadas or hard shell tacos, so she ordered a pair of soft shell flour tacos and agreed that these are pretty good. Add a packet of hot sauce and there’s not one thing from any of the competitors in Del Taco’s market that tastes anywhere near as complex and interesting.

(This meal was at the company’s invitation and was complimentary. They also provided the photograph above. It’s our policy to always note when we’ve received our meal without charge. If you would like to invite us to your restaurant’s media events, please drop Grant a line at gmslegion@gmail.com .)

One thought on “Turkey Tacos at Del Taco”