Meanwhile, back in Atlanta…

Earlier this month, Del Taco finally opened their second Atlanta-area store. Previously, you may recall, the chain, with something like 500 stores in twenty states – California home to about 320 of them – targeted Atlanta for a major expansion. They are still talking about a five-year plan that will bring sixty stores to our market, but right now that’s still a big flaming pie in the sky. They’re moving quite slowly, building on the success of their store in Snellville with a second up here in Cobb, across I-75 from Kennesaw State University. We visited on their grand opening day for my daughter to suck down helium from balloons, and to have some tacos, of course.

One thing that longtime readers might not have noticed is that, despite me waxing eloquently about them whenever the opportunity has arisen, Marie had never actually eaten at a Del Taco, and my daughter only had it once, in 2001 or something. No, all of this lunatic-level praise about this fast food has pretty much just been me. 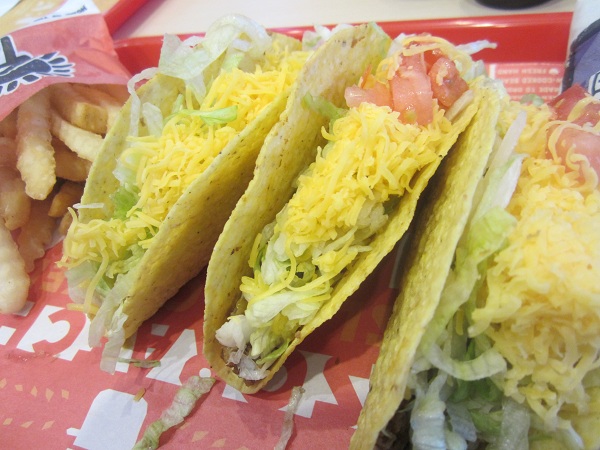 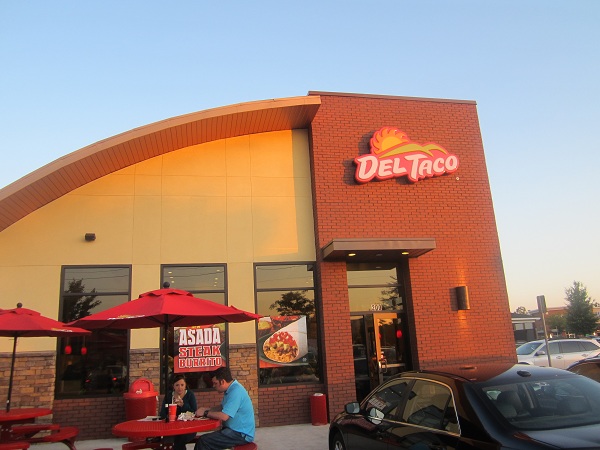 It is worth tempering this enthusiasm with a little harsh reality. An old friend of mine who owns a restaurant in Flagstaff, Arizona pointed out that independent businesses in the city tremble whenever some well-known chain announces that they’re moving into that city, because the population cheers and gets ready to eat there. “I remember this from my childhood” or “I visited that restaurant when I was on vacation” trumps “I have no idea what the heck you are,” basically. That’s a huge mountain to climb. And, much as I love Del Taco, I could stand at its front door and throw a baseball through the window of the Chilito’s in the strip mall next door. Honestly, I have not actually eaten at Chilito’s since I wrote about it (two years ago exactly, oddly enough), as Marie and I are much more likely to try something new and write about it than revisit someplace, unless that place is downright amazing.

Still, I do wish that Del Taco had refurbished some other building than erect a new facility so darn close to an existing, individual store with very similar food. It strikes me as not being very neighborly at all. In Smyrna, the third local Del Taco is actually going up in the storefront of a shuttered El Pollo Loco, just across and up the street from a Taco Bell. I don’t have any problem at all with that. Only the truly mad would choose the Bell over the Del.

So we joined a really huge crowd for the opening night fun, with lines out the door, dozens of employees passing out menus and working their butts off, and teenage girls sucking down helium and saying “Oh my Geddddd’ over and over. Marie, who declined to try a taco when we stopped by the since-closed location in Spartanburg in 2011 (she was saving room for The Beacon), and who wasn’t with me when I went to Snellville to give that location a try on the occasion of its opening, finally tried a chicken quesadilla and, politely, recognizing my enthusiasm and not wishing to temper it, discreetly did not finish it. You might have noticed that Marie is a sweetheart, and that she really lives this blog’s attempt at living up to the ideal of not wasting time talking about meals that we didn’t enjoy.

My daughter was so very much in favor of her food, however. She had a burrito and a taco and thought that they were terrific. She said that they were much, much better than the junk on sale at Taco Bell, and that she’s going to tell everybody at her school to stop eating there and come to Del Taco instead. There really is a difference; the beef simply and assuredly tastes better and fresher.

I’ve been back a time or two since opening night. I’m not going to tell you how many times. After all, this is a long menu; I have many things to try.

Other blog posts about the return of Del Taco: