This is Marie, once again contributing an article that is primarily about dessert, although rain, congestion, and comments on the works of Douglas Adams will also become important along the way.

A reader, Mark Vick, sent a recommendation that we might enjoy stopping here. We were not able to make it by the bookstore that he also told us about on this trip, but I’m always happy to make time for cake. Klingler’s Cafe is also listed on the famous 100 Dishes to Eat in Alabama Before You Die (PDF), a bucket list put together by that state’s department of tourism, and which Grant reads while licking his lips. I don’t necessarily approve of having a definitive bucket list, as I firmly believe that people change enough during their lives to change their tastes. If you don’t believe me, think about your favorite food when you were five, the one you had to have at least once a week or you’d sulk and refuse your dinner. Is it still your favorite now, or has the item changed into an occasionally indulged comfort snack?

We started out from Memphis in good weather for driving, but it gradually started to decline. On the way to Birmingham, I started thinking about a passage in So Long and Thanks For All The Fish by Douglas Adams. Rob McKenna is, unbeknownst to himself or the world, a Rain God. As he’s also a long-distance trucker in Great Britain, the world in general has no opportunity to notice that rain follows him everywhere. Anyway, he has some excessive number of names for types of rain. I am firmly convinced that a) he was driving on the road with us, b) we experienced most of the McKenna-recognized types of rain while we were on the amusingly named road we were traveling, and c) that we definitely had far too much time with the specific rain type which makes you want to turn off your wipers to see whether the view would actually get worse, because you certainly can’t see with them on. I didn’t actually try that because there was a baby and several other innocent passengers in the car, but likely I would have had the same result mentioned in the book, which is that the view would have indeed gotten worse with the wipers off, but then failed to improve once they were turned back on. We had to exit and stop in northwest Alabama for quite a while and pass the baby around from seat to seat to keep him happy. He had some amusing times pretending to drive the car and checking out the flavor of the steering wheel. The rest of us wondered, rather as you might be doing, how long it would take before we could have any dessert. 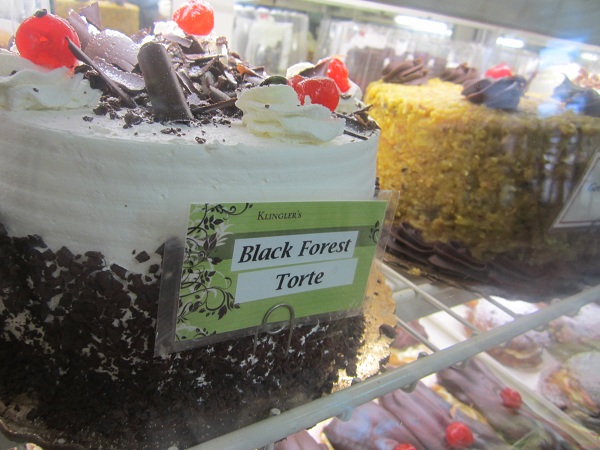 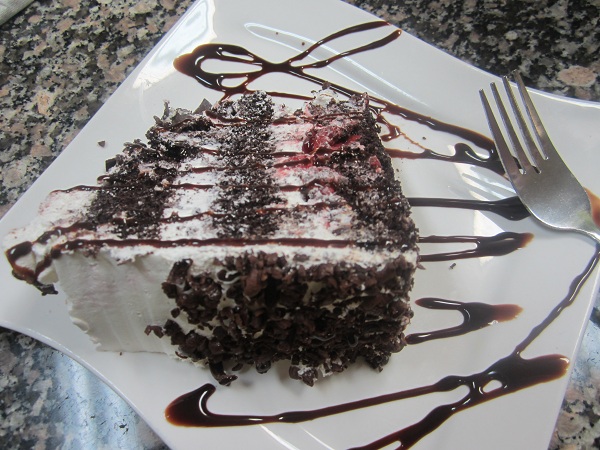 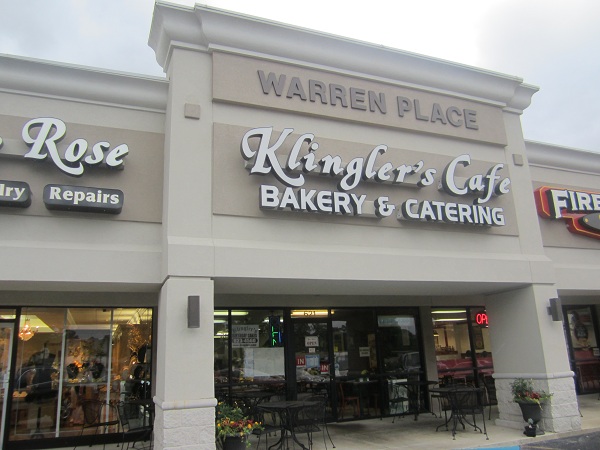 As we got into Birmingham, we found that we’d come in just behind a rather large accident that was about to make most of the commuters exceedingly unhappy in a a rather short time. Despite realizing that there weren’t going to be very many minutes for us to enjoy the treats inside before we had to get out of the city again to get ahead of the worst of the traffic, we still just had to linger a short while and enjoy not moving. There’s also the fact that taking a baby and a large diaper bag down the labyrinthine hallway to the ladies’ room at Klingler’s was a rather slow trek since the hallway was quite narrow and the walls covered in memorabilia, including an article that inexplicably concentrated on food other than desserts.

This is a European-styled bakery, owned by Irmgard Klingler, that opened in 1982 doing catering business and selling their wares to hotels. They finally opened a store of their own in the suburb of Alabaster before moving to their current home just outside the Birmingham city limits about twenty years ago. Some people used to say that this place specializes in big European dinners with sausages and schnitzel, stuffed cabbage and stuffed chicken, but eventually, word got out about their desserts. They have become legendary, with the black forest torte becoming their most popular, and these days get all the attention.

By the time the plates arrived, there was quite a lot of opportunity for an anticlimax. After all, there aren’t many things that can withstand the extra tension of a long and frustrating wait, followed by a distraction such as the store full of pretty shiny things that the girlchild simply HAD to check out while we waited for our order and the baby got changed. As you can see, the plates were pretty and filled the eye – I generally fail to get one of the saran-wrapped cakes at BBQ places mainly because however good they might be, presentation actually does make a difference in how something tastes.

We actually got two different versions of the same thing, the Black Forest cheesecake and torte. We traded bites and were both satisfied that we’d ordered the correct thing, and the baby got a tiny taste of chocolate syrup. Grant, who likes sweet things far less than I do, was satisfied with a few bites of mine, because he was planning on having supper at a barbecue place in Anniston. I got tempted by the apple strudel and bought a slice to take home for breakfast the next day. It didn’t make it more than a few hours into the evening.

Grant has described what happened next as the worst end to a good road trip ever. As if the rain and the traffic were not bad enough, we were then delayed by a flat tire! More than two hours later, after the crew at the Leeds Wal-Mart Service Center agreed to stay a little late and help us out, we got back on the road, but were not able to make it to Anniston in time for Grant to get his barbecue; they had closed for the night thirty minutes before we got there. Grant bought dinner from a Jack’s restaurant instead, and everybody got very tired and our spirits were very low by the time we finally got home. The trip to Memphis took nine hours, thanks to the detour through Oxford, and the trip home took twelve. That was enough to keep us parked at home for the next few weekends!