The last time we were in Chattanooga, we stopped by that city’s children’s museum, prompting me to write a few paragraphs in praise of these fun little getaways. If you’ve Googled your way to our blog because you’d like to read a short thing or two about Gibson’s Donuts, then hit your Page Down button a couple of times. Before I get there, I’d like to reiterate what I said previously for the benefit of our road tripping audience.

Most, but not all, children’s museums are included in the conveniently-named Association of Children’s Museums, and most of these, more than 170 nationwide, have reciprocal benefits with each other. This is a really super deal for anybody with kids aged between nine months and about nine years who road trips like us. An annual membership at your home museum probably runs between $75 and $100, and gets you in to all these others. Just looking at cities that we were likely to visit back when we started the blog, before we planned to have a baby, that would include Chattanooga, Columbia, Gainesville, Greenville, Huntsville, both Knoxville and Oak Ridge, Macon, Memphis, Murfreesboro, Tupelo and Tuscaloosa, and they’re building one in Savannah, but I’m not sure yet whether that’ll be an ACM one with reciprocal benefits. The one in Macon, like darn near every single stinking thing in middle Georgia, is closed on Sundays. Of course.

This trip to Memphis reminded me of something that time and trauma had caused me to forget: babies hate road trips. If you can do anything, anything at all, to break up the time in the car for them, do so. A children’s museum is a terrific break midway along a drive, and it is also just a great way to wear your toddler out completely before you get in the car for the long trip home. We have always advocated making proper trips out of an eating tour of a town, and designing, for example, a trip to Birmingham with stops at Reed’s, at various bookstores, at Vulcan Park, and so on. Birmingham is perhaps not the best example I could use for this entry, as it doesn’t have a proper children’s museum with the attendant infant play area (neither does Asheville, sadly), but it does have the McWane Science Center. As our baby gets older, I can totally see us spending some time there letting him explore and spend time focused on his needs, which might not necessarily include stuffing his face at seventeen different hot dog stands.

The Children’s Museum of Memphis opened in the early ’90s and it is showing its age a little bit, but the parking is free(!), the staff is terrific, and the infant play area is crawler-friendly and has a great little slide, even if our baby never quite figured out how to position his body to go down it properly without a little help from Dad. As he gets older and we return to Memphis to visit Marie’s sister, he will have lots more to explore. There is a great vertical climbing “maze” called the Skyscraper. Our teenage daughter is almost too big to make it through this thing without getting stuck; in two years, the baby will be rocketing through it.

Now, as for breakfast on this Monday, we actually kept it simple beforehand, and rather than making all of Marie’s family meet up at some obscure place somewhere on whatever side of town something weird or fun struck our fancy, we just said our goodbyes at the IHOP across the street from the hotel before Marie’s mother had to leave to catch her plane, but I was planning ahead. To be honest, our most recent trip to Nashville had soured me on going out for breakfast somewhat. There are certainly some spectacular exceptions to the rule – Nashville’s own Pancake Pantry a quite remarkable one – but for the most part, when you go out for breakfast in any city, the number of great places is smaller than the number of great lunch places, and, after you’ve exhausted a town’s legendary and eclectic spots, you’re probably not going to find anything you can’t get anywhere else. Best just to save the money, wait ’til eleven and get an early lunch, and just start your day on the road with a granola bar, or a doughnut. 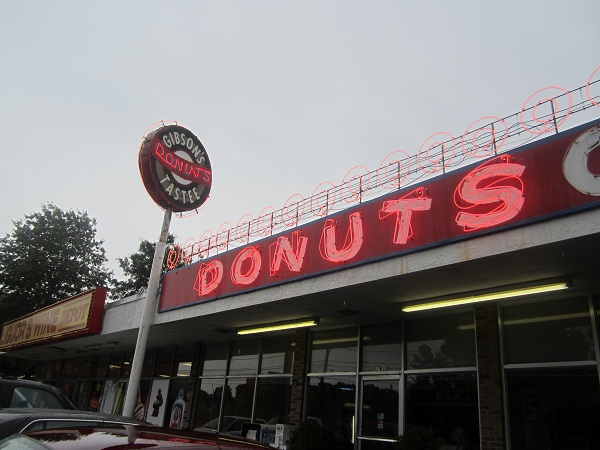 So we had just planned to have a small breakfast at IHOP, say our goodbyes, exhaust the baby completely at CMOM, and hit the road, getting as many miles down as possible before he woke and wanted attention – slash – a bottle – slash – changing. But then our hobby, or more accurately, the maintenance of our hobby, got in the way.

See, there’s always a little side work involved with finding the right photos, uploading them, coding everything, getting the Urbanspoon code for that little yellow and blue box you see down below, and I like to get as much of that done as possible beforehand. Since I sleep terribly away from home – especially when I’m staring at the ceiling, biting my lip and shaking my head because I had tenders at Gus’s instead of some good dark meat drumsticks – it makes sense to do a little of this work on the laptop while everybody else enjoys some sleep, and get the skeletons of the entries ready for Marie and me to come back and actually write later.

And so I was looking around Urbanspoon Memphis for the relevant details of the restaurants that we had enjoyed on Sunday and noticed, among the most recent photos uploaded, a picture of Gibson’s Donuts on Mount Moriah, near Poplar. Well, just look at that photo up above. You all know that we absolutely love silly old retro restaurant design like that. I could not possibly pass that up! We just had to stop by on our way out of town.

After all, we needed a granola bar or a doughnut.

Anyway, this place opened in 1967. They say Elvis loved their doughnuts, but every business in the city that opened prior to the King’s death says that. They’re open 24 hours, they are almost always busy, and their doughnuts are completely heavenly. We munched on sugar glazed doughnuts and caramel doughnuts and, because we did not know to ask for them, failed to grab any buttermilk drops, which are a fun regional tradition not unlike the doughnut holes you might find elsewhere.

I did not take nearly as many photos as I should have, and almost all of them were horrible. The usual snaps that I take of desserts or doughnuts in their display case were marred by too much glare, and, anxious to get on the road and take advantage of the sleeping baby, I didn’t take nearly enough pictures of the wonderful exterior, with its neon and its gently rotating doughnut sign.

You know what’s right across the street from Gibson’s? The other location of Gus’s. All we had to do was wait another 45 minutes and I could have had some of those dark meat drumsticks that I foolishly did not enjoy two nights before.

The baby snoozed, worn completely out by the visit to CMOM, and we staggered through the traffic lights along US-78 south of the city. Eventually, we made it into Mississippi and the road turned into the limited-access future I-22 and we made darn good time for a while, munching on doughnuts, listening to quiet music and holding hands while the children slept. After we got into Alabama, the baby woke and the rain got awful… but that’s another story.