This is Marie, contributing an article about how the baby and I spent the Sunday in Memphis while Grant and Big Sis went off in search of barbecue, thrift stores, and other entertainment. The visit was primarily an opportunity for my siblings and mother to enjoy spoiling the baby. This task was, of course, efficiently accomplished during the course of the day. However, we had some meals worth mentioning in between gifts and playtime.

After they dropped me off, we started off at Boscos Squared for brunch. This would be the third time I’ve visited, and it’s been a different experience each time. On the first visit, circumstances I no longer recall prevented me from choosing most of the really interesting items on the menu. The second visit was an opportunity to try the pizza. This time, the baby fell asleep on the way and napped most of the way through lunch, but woke up in time to try a few new things. My brother ordered a neat appetizer of fried artichoke which went over pretty well among us.

My choice was recommended by my sister, who has eaten most of the things on the menu. She had pointed out Eggs Sardou, which is poached eggs with artichokes and creamed spinach on an English muffin. Since poached eggs are such a simple thing, they wind up being surprisingly difficult for restaurants to do well, so it always seems something of a gamble to take them. These were perfect and paired well with the vegetables. The meal comes with side of a fruit salad. If I’d known how good it would be I’d have ordered a larger size. That had some of the best pineapple I’ve tasted in at least a couple of years, along with some honeydew soft and sweet enough to try on the baby. He gave his seal of approval on the fruit but seemed to like his Oma’s grits better than anything else.

After brunch we went for dessert across the street at YoLo, a yogurt and gelato place. We all had the gelato on Anne’s recommendation, and selected chocolate with grasshopper (mint with cookie bits), strawberry coconut with blueberry, and marscapone. I often don’t like chocolate in anything but traditional ice cream, because there’s just something a little wrong about the proportions of creaminess to cocoa taste. There were no such concerns here – this was among the best chocolate frozen dessert I’ve had. According to their web site, there are three locations, each sourcing their ingredients as much as possible from local places. For instance, the blueberries are from a local pick-your-own grower who also sells pies and other goodies; I had tried some of the blueberry and if only it had gone with the chocolate it would have been mine. Honey comes from a local apiary. Cookie bits come from local bakeries whose goods demand to be tried. All in all, it’s a place dedicated to the local food movement who has done an excellent job of making the experience a good one. Inside the place looks like a cross between a bright and quirky coffee shop and a standard froyo place. I don’t know that I would ever get around to trying the froyo even if we lived next door to the place, however, but as we have a thirteen year-old if we did live next door she likely would spend at least half her allowance there

After all those goodies we had to take a stroll around the Memphis Zoo. It was a truly rewarding visit and the baby figured out how to point at things by having things worth pointing at. When we went through the bird center it became quite clear that the baby had the best view, considering the birds liked to keep up in the higher portions of their quarters and were therefore best seen from a low angle. We also saw lions and tigers and panda bears, oh my. And koi.

Speaking of tigers, my brother bought Daniel an incredibly cute tiger-print onesie at the zoo gift store. It even has a little tail! Grant later grumbled about the outfit, as it violates his arcane-but-specific codes of college football conduct, but he forgave it as the University of Memphis is not in Georgia’s conference. 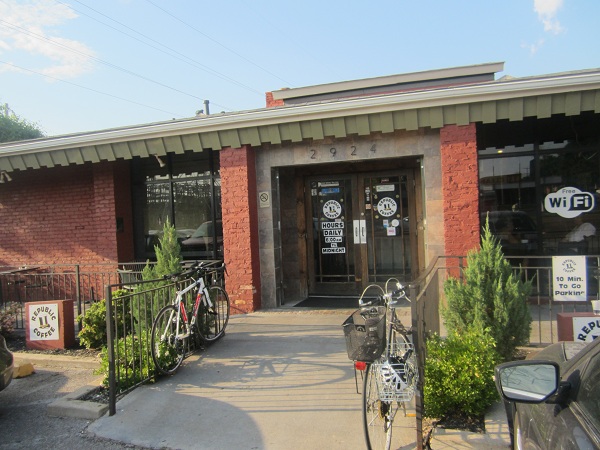 Despite the walk through the zoo, I had not worked off my lunch plus dessert and Grant had been eating nearly continuously all day. After we all met up, we retired to Republic Coffee for snacks and beverages and a bit of light gaming. This popular shop opened in 2003 and is one of the city’s most well-known, winning many awards from local papers. Many students and study groups meet here to take advantage of the free wi-fi and the large meeting room in the back. We didn’t have the eight people necessary to reserve the room, but it was a slow Sunday night, and they let us use it and spread out our game.

Republic has a much deeper menu than most coffee shops, with a long list of sandwiches and salads. Apparently the hummus is very good. I asked Grant whether he’d like some, but I was unaware then just how much he had indulged on his barbecue trip. Mainly, he and our daughter sat on the couch and tried to keep the baby entertained while we tried to game. I had a really good bowl of mac and cheese, and my sister had a rather decadent waffle which she couldn’t finish even with help. The baby played with his father and at some point during the game his older sister teamed up to make some truly goofy photos of silly faces. Luckily, the baby later sacked out and slept fairly well, allowing the rest of us to pass out and try to sleep off our overindulgences.

If forced to pick only one of these to return to, the gelato place would win most of the time, but in a cheesecake sort of mood the coffee house might win. Their dessert counters looked quite tempting.

2 thoughts on “Marie, meanwhile, in Memphis…”