It was looking as though my daughter and I were not going to have the chance to eat at Central. We pulled in, saw the line around the building, and went on to A & R. We came back, saw the line was no shorter, and went back to Beauty Shop. Now completely full, thanks to a thick (and bizarre) milkshake, we made our way toward our next destination. We asked a server at Beauty Shop whether she knew of any thrift stores in town; my daughter was ready for more bargain hunting.

“Well, there are lots of thrift stores on Summer Avenue,” she said, “but I have to tell you, it’s a little sketchy.”

“I’m okay with sketchy; we just came from Elvis Presley Boulevard,” I replied. “Could you tell us how to get to Summer from here?”

So we made our way over to Summer, which was not hard to find, and not as sketchy as she had implied. Lest the reference in an earlier chapter be overlooked, Memphis does unfortunately have more than its fair share of troubled neighborhoods. Summer reminds me of Tara Boulevard, just south of Atlanta, on the way to Jonesboro. Over time, the local retail gave way to national chain sprawl, and then that began to fail, leaving many shuttered buildings and several others repurposed into local businesses. We passed two different Tops Bar-B-Que locations about two miles apart. This is a local chain of about fourteen stores. Everybody agrees that they are pretty good, but nobody gets excited about them either. We passed more than a half-dozen thrift stores, all closed on Sundays. Finally, as we prepared to turn around and go back to a Ross store for my daughter to shop, we noticed a second location of Central BBQ, which has taken up residence in an old Red Lobster. Happily, for those frustrated by the small parking lot and the long line at the store’s original location, this satellite very rarely gets packed. 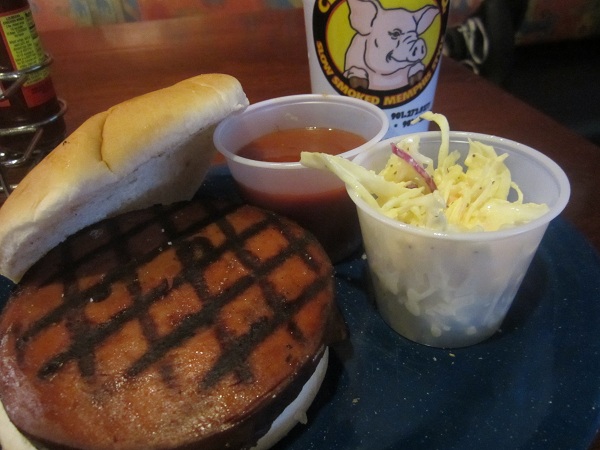 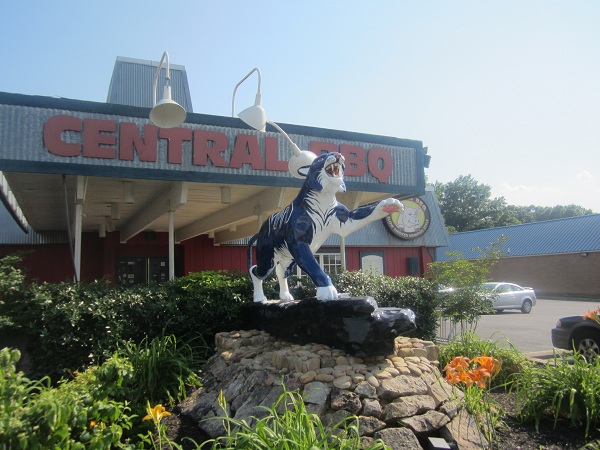 I knew, sitting down, that I was not going to be able to do Central any justice. I had planned for one decent-sized lunch and two small meals, but I had not factored in an enormous, thick, weird milkshake at Beauty Shop. I did not wish to waste either money or food, but an acquaintance at the Roadfood.com forums who goes by the handle ‘MilwFoodlovers” had raved about Central’s barbecued bologna, and I was keen to at least try that.

Bologna is something that I almost never order at a barbecue restaurant. Actually, that isn’t true. I’ve never ordered it, anywhere, since we were at a since-closed deli in Athens two years ago. I was not sure what to expect, but I’d already had terrific pulled pork and exceptional ribs on this trip, and so I was willing and prepared to try something quite different. Well (he said slowly), it certainly was that.

While my daughter waited patiently and some irrelevant NBA playoff game ticked slowly toward its eventual billion-time-out conclusion, I slowly cut off small bites of bologna, dipping them in either their hot sticky sauce, or their Carolina-styled mustard sauce. It really was quite tasty. Central opened in 2001, I understand, and, for a relative newcomer to the Memphis scene, they have completely nailed it. No wonder they are so popular.

Looking over other people’s more proper reviews, I find myself salivating over he thought of their ribs, or their pulled pork, or their barbecue nachos. Everything sounds and looks so good. But one thick slice of bologna was all that I could finish, and I spent the time in Ross while my daughter shopped perched on a chair near the door, thankful for the air conditioning as the temperature rose to a merciless 95 (the first week of May!), and wishing that my daughter was a few years older so that she could take the wheel and I could fall into a food coma.

Other blog posts about Central: