As we were standing in line for Gus’s on the Saturday night of our trip to Memphis, Mike told us about this remarkable milkshake that he’d enjoyed the previous night. He said that it was a – get this – cinnamon chocolate chile pepper milkshake, and that it came from a place in the Cooper-Young neighborhood called Beauty Shop. “Well, heck,” I thought, “I am definitely going to have to check that out.” As you might have guessed, I do enjoy good milkshakes. And weird ones, too.

Well, the following afternoon, my daughter and I were on our barbecue tour. Driving between Central BBQ, where we didn’t eat, and A & R, where we did, purely by chance, the directions took us along Cooper Street, right past Beauty Shop. So, once we finished our barbecue on Elvis Presley, we turned around and came back for something to drink. 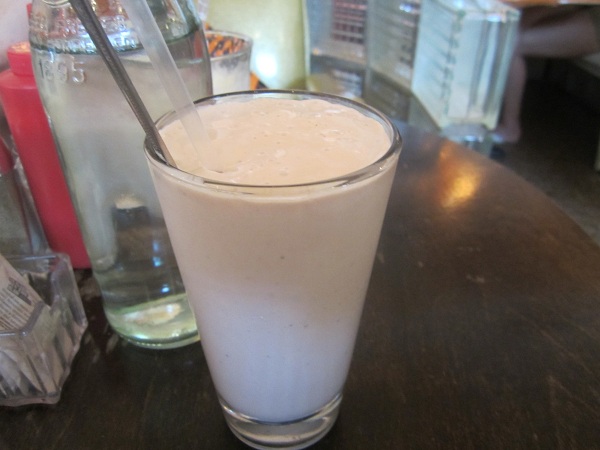 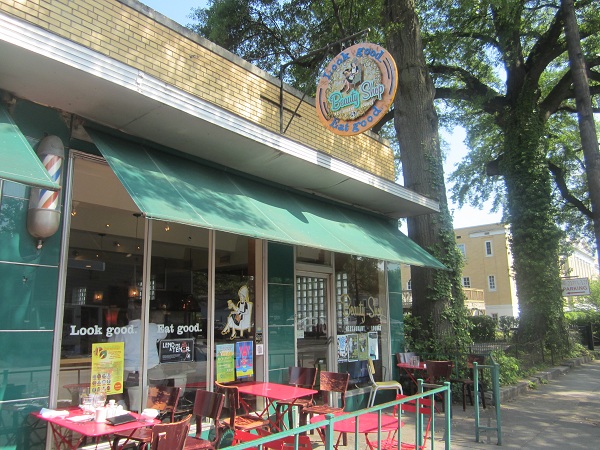 This place is eclectic and silly in ways that many other restaurants just dream about trying. Once upon a time, this was indeed an old-fashioned beauty parlor, and the modern restaurant incorporates those old designs and fixtures, installed in the late 1950s and abandoned two decades later, into their present layout. Most obviously, the bar works around the old hair washing sinks, and, in the rear dining area, the seating along the left alternates between booths for manicures and two-seat tables underneath those large hair-driers. They are separated by glass bricks in a curved, dated, art deco layout, forming “alcoves” for the booths. The restaurant is renowned for its modern American menu and very popular Sunday brunch. Popular dishes include their steak frittes, goat cheese dumplings, lamb chops, fries dusted with cayenne and sugar, and, er, watermelon and wings.

On a mirrored wall to the left as guests enter the dining room, the staff has written out the day’s specials and the current ice cream, milkshake, and gelato flavors. I was reminded of that line from “Punish Me With Kisses” by the Glove, about writing a name in lipstick on a mirror as I leave. There are, perhaps, one or two somewhat traditional flavors on the list. My daughter went with a pistachio almond milkshake, but our server recommended the – get this – strawberry balsamic vinegar cracked pepper shake.

I’ve been trying to recall, since our visit, whether I have ever had any combination of flavors as downright peculiar as that. They were not especially strong, and the curious mix did not linger, but I certainly tasted all three, mildly, with each sip. Somehow it worked, but boy, was it ever weird. My daughter’s milkshake was much better. That’s not to say that mine was bad, just that hers was quite triumphantly good. “You know,” she said, “I can drink anybody under the table, as long as we’re drinking pistachio almond milkshakes.”

Other blog posts about Beauty Shop: