My plans for the day o’ barbecue in Memphis took a hit when the venerable, and extremely popular, Cozy Corner Restaurant was damaged by a fire in January and was forced to close. Happily, a few days before our trip, Southern Living writer Robert Moss tweeted out that they would reopen in temporary digs across the street. The owners of Encore Cafe had reached out to them, giving Cozy Corner a stopover home with an abbreviated menu while their restaurant was repaired.

The first Saturday that they were open, the place was packed. The kids and I arrived at 12:45 and they were already sold out of their signature item, barbecued Cornish hen. Cozy Corner is possibly the only place that I’ve ever visited that offers such a treat. Their fans, deprived of Cornish hen for eight weeks, had apparently lined up before they opened, and the hens were gone inside 90 minutes. That was okay; we had some sliced pork, beans, and slaw and it was all good. 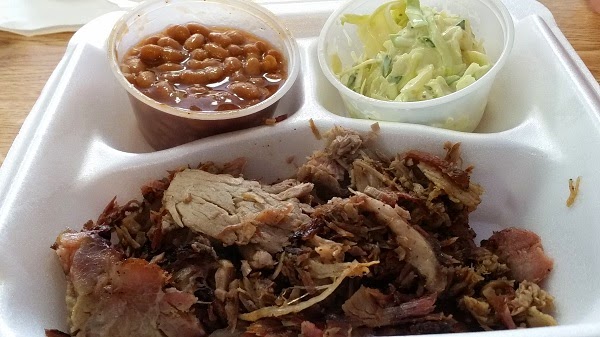 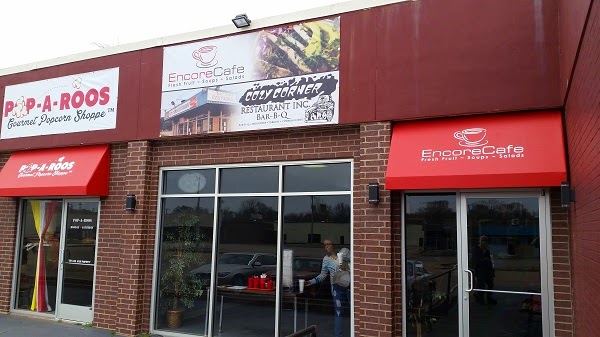 The pork was quite dry, much more so than I’m used to, but the meat is absolutely packed with smoky flavor. I’m not certain whether they’re able to have exactly the same setup for their smoker, and I’d have to defer to one of their many regulars as to whether it’s the same taste as they have across the street, but it’s certainly really flavorful. Some of the links below show the “aquarium” charcoal pit that guests can see in Cozy Corner’s large and open kitchen, but the setup in Encore has them taking orders and serving from a small window.

Anyway, many Memphis places go crazy with the sauce and drown the pork, the hens, the ribs, the beef, the whatever, but the meat is really good, and I’d recommend sampling at least a little of it dry before you dump a bucket of sauce on it.

They go mild with the mustard in their slaw, and the beans are just terrific. Beans and slaw are the most common sides at Memphis barbecue restaurants. I like the slaw at Leonard’s a lot better, but the beans at Cozy Corner are phenomenal. 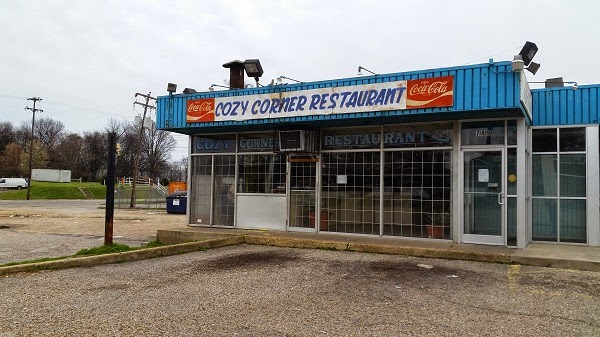 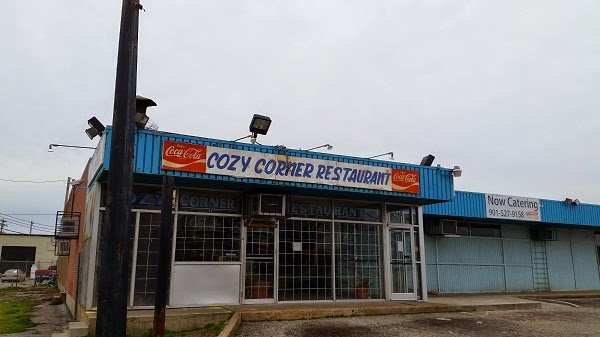 Before we left for our next stop, we pulled across the street so I could snap some pictures of Cozy Corner’s temporarily-shuttered building, just in case, you know. It’s kind of a legendary little place, in business since 1977, and is one of the very few places we’ve found to hit the trifecta of good media recommendations for restaurants: Roadfood.com, John T. Edge’s Southern Belly, and TV’s Diners, Drive-Ins, and Dives. While I’m grateful to the nice people at Encore for helping out their neighbors, the next time we are in Memphis, I hope we can come to the original, and get the Cornish hen with some beans!

From here, we drove to the Cooper-Young neighborhood, where my son and I spent ages in the pretty awesome Burke’s Books. The girlchild walked over to Beauty Shop for one of their ridiculous but wonderful milkshakes. This one was a white chocolate and blueberry and it came in a great big bucket. She also found a dress that she loved at Peridot; after consulting with Marie about her budget, we swung by the next day for her to buy it. I asked her not to wear it on Monday, because I knew – I just knew – that she’d drop barbecue sauce on it on our last stop. She did. Mercifully, it did not stain…

Other blog posts about Cozy Corner: