Well, I done Tops wrong, to be blunt. I had mistakenly assumed that they were a sort of Memphis version of some other regional fast food barbecue chains, like Whitt’s or Rick’s in middle Tennessee / northern Alabama, or Buddy’s around Knoxville, where meat is smoked in one location and moved around to others and kept in warmers. It turns out that Tops, which has fourteen stores in the area – one of which is across the river in Arkansas, and another two in Mississippi – smokes the meat in each location. They use an indoor pit in each store, and the children and I visited the oldest existing restaurant on Rhodes Avenue in East Memphis, thinking, incorrectly, that they do all the smoking here.

No, each Tops has its own pitmaster, which means that the taste and flavors are probably going to be subtly different at each location. Since we are only in Memphis sporadically, I kind of doubt that we’ll ever really document all the variations between each. That’s best left to locals like Memphis Que, I believe. What I can say about the different locations is that they all look quite different, with no consistency in design beyond their logo. We’ve driven by at least seven of the fourteen stores on our travels. 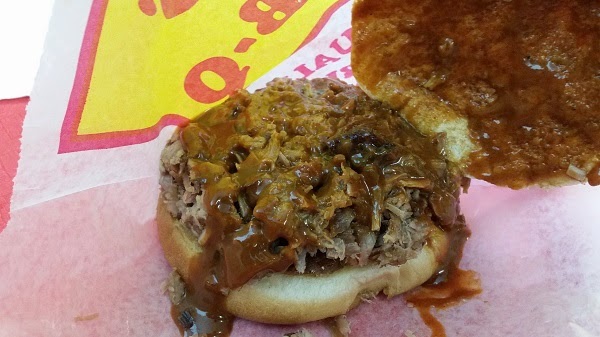 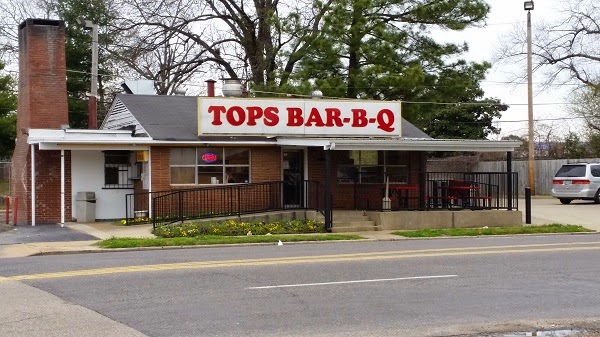 Much like Whitt’s and Buddy’s, however, one thing that is common to Tops is that, since it’s a chain, many of my fellow hobbyists have only visited it sporadically. Reading their reports, some of which are linked below, I was surprised to see that at least as many people, if not more, rave about their cheeseburgers as they do the barbecue. Well, there’s something else to try one day.

While I do enjoy Memphis’s sticky sweet sauce, I’m not quite as wild about it as I am other barbecue sauces, and so I was less than thrilled with the sauce-drowned sandwich – I deliberately didn’t ask for it dry here, so as to sample it as it is usually prepared – as I might have hoped, but it was still very good, smoky and tender and flavorful. With a little less sauce, I could eat these a couple of times a week.

Tops first opened in 1952, in a place on Macon Road that’s no longer there. Memphis Que reports that the one on Rhodes is the oldest one still standing. If you’re curious about Tops’ history, and how it intersects with a pair of other Memphis barbecue chains that no longer exist, Coleman’s and Loeb’s, there’s some additional background in this 2002 Southern Foodways Alliance interview with general manager George Montague, and we’ll find a reason to speak about Loeb’s in the next chapter.

Other blog posts about Tops: