Driving south down Elvis Presley Boulevard into what the blog Memphis Que describes as “one of the poorest urban areas in the United States,” it’s not possible to avoid the feeling of shellshock. Much of Memphis feels distinctly and troublingly unhappy and impoverished. My daughter and I stopped into a strip mall on Lamar about an hour before we had a meal at A & R, and the feeling there was one of gloomy malaise and malignance, too. Much of Memphis also feels bright and full of sunshine as well, but the sad parts are expansive and the feeling lingers.

We also noticed, as we shopped in the clothing stores, that every single shop had one of its two doors locked. This caught us every time as, used to the rule “exit to the right,” we got stopped by the right-hand door every time.

After we shopped, we tried to get some grub at Central BBQ, the second stop on our planned tour. Unfortunately, there was a line backed up around behind the building, so we tabled it and drove on to our next destination, A & R Bar-B-Que. I had read about this place over at Roadfood.com shortly before our first trip to town in 2010, but we ended up at Jim Neely’s Interstate on that trip instead. What my daughter and I found at A & R was a meal every bit as good as what I remember being served at Interstate. It was a delicious chopped pork sandwich with very good slaw and a thick and tangy red-brown sauce. 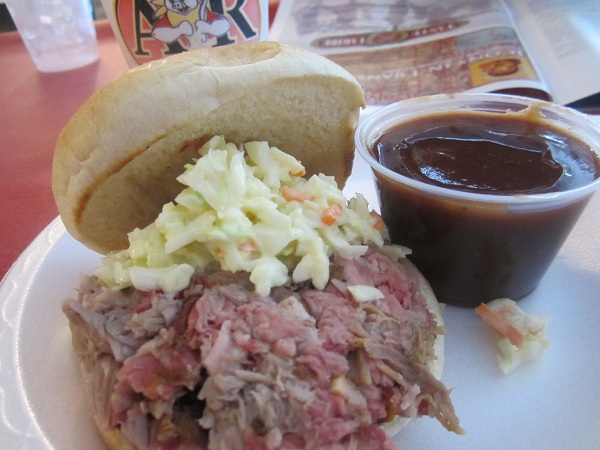 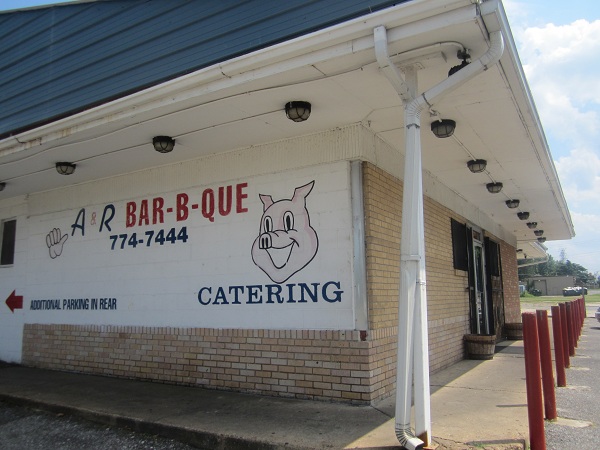 I asked for my meat dry so I could try a few bites of it before smothering it and making a mess. It was not at all bad, but it belongs to that category of barbecue meals that are enhanced, massively, by the sauce. The pork, cooked over a mix of hickory and charcoal, is moist and agreeable, but the taste is quite mild. More than many, this is a meal defined by how well it mixed with the slaw and the sauce. The result was quite satisfactory, and certainly not a disappointment, but I enjoyed the day’s two other barbecue stops a good deal more.

A & R was quite backed up with a huge after-church order, so we did have to wait a while for our sandwiches, the pounding of the cleaver in the kitchen driving home just how much I was looking forward to finally trying it. My daughter chose to kick back and have some dessert here as well, and enjoyed a slice of strawberry cake.

Outside, the temperature rose to a surprising 95 degrees. Whenever I come to town, I catch the city in a heat wave. I liked the barbecue here a lot, but something about the sweet tea didn’t satisfy me. I poured it out and we sipped on some water, took some pictures, and made our way back through the haze and the wide open treeless blight to someplace with some shade and a cool treat.

Other blog posts about A & R: