Hillbilly Willy’s was already several years old before I discovered them. George Foster started his business in a tiny little shack in Ooltewah, on the other side of Chattanooga from his present location, about eleven years ago, doing carry-out and catering. Around the same time that he was growing and thriving and looking for a larger space, I was stopping at a Bi-Lo just off I-24 on my way to Nashville for occasional twelve-packs of Double Cola. In time, the Bi-Lo closed, the shopping center’s owners lowered the rent on the smaller spaces to attract business to the mall as it lacked an anchor, and Foster moved in, setting up billboards letting people know about his great barbecue on the west side of town.

I stopped by for a meal here in December of ’09. I’ve said before that it’s emphatically not a good idea to have a meal at a new place when there’s any kind of personal turmoil going on. At the time, there was personal turmoil – teenagers! – and I left not remembering the food, just the unhappiness. I think that I liked it, anyway.

Amy on Food, who, as I write this is, sadly, in the process of moving to Charlotte and leaving us, stopped by in November of last year. I mentioned to her when we met that I had eaten there as well, and she asked whether Foster showed off his smoker to me. I actually imagine that Foster might have looked at the table with unhappy ex-spouses and grouchy teenagers and tweenagers and people trying to mediate things and probably recused himself back to his smoker and waited for us idiots to leave. Well, I still didn’t get to see his smoker when we made a long overdue return stop to Hillbilly Willy’s when we made our way back to Chattanooga from Scottsboro, but the chopped pork sandwich was extremely good anyway. 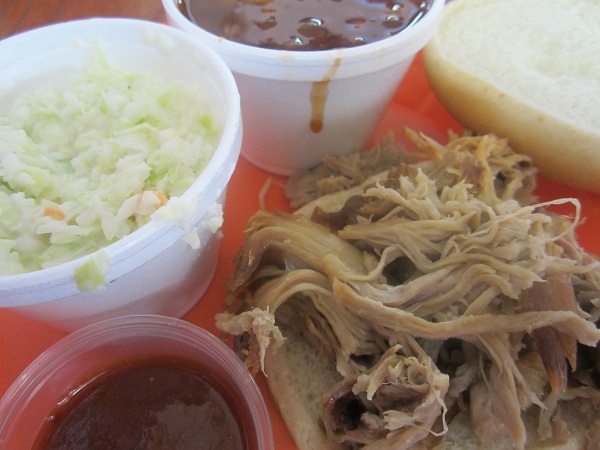 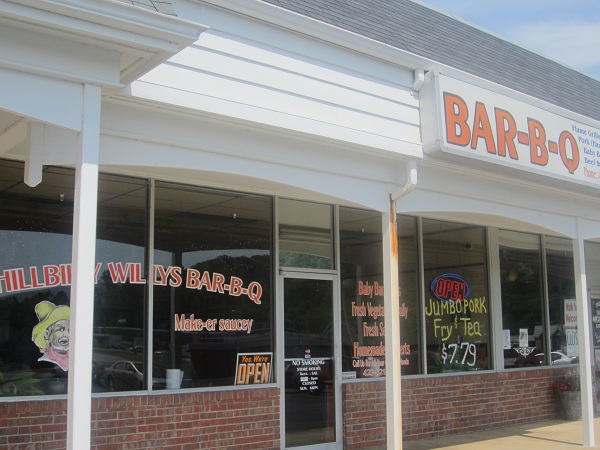 The pork is smoked over hickory and done very well indeed, and served with a hot, sticky, sweet brown sauce. They offer a lunch special of a sandwich with two sides. My daughter had most of the slaw, which was quite good, and the beans, which had a wicked and wonderful tangy kick. As we didn’t linger or plan to stay for a long and involved spell, I really don’t have more to say than that. Suffice it to say that this is an absolutely solid barbecue restaurant, and very conveniently located off the interstate for a quick visit. Understanding that I really have not found a knockout, must-have, shout-from-the-top barbecue meal in Chattanooga, this is nonetheless perfectly satisfying and left me encouraged to go back sometime when we have more hours to spare, try more things from the menu, and learn more about Foster’s good work.

After finishing up here, I felt compelled to make up for Marie’s inability to get a sweet treat at the dairy bar that had no dairy, as related in the previous chapter. I remembered that there’s a Sonic Drive-In just around the corner from Hillbilly Willy’s, and my sweetheart really does love their grape slushes. Plus, it was half-price “happy hour” and the drink only cost a dollar. This was a quick little detour, our time cut in half by staffers who raced orders down the drive-through line to get people with simple orders like ours moving quickly. From there, we drove downtown.

I’m not sure whether I have made this point before, so let me state it clearly here: Downtown Chattanooga is awesome. What happened here, and did not in Atlanta, is that in the late eighties, all of Chattanooga’s civic and community leaders decided that their city really was a dump and they needed a do-over. Over time, they’ve evolved their downtown into a model of how to do it right. While in Atlanta, we can’t even get a dang streetcar line started without years of whining about how nobody will ride it because we all live in the suburbs anyway and there’s nothing to do downtown and the ballpark is too far away from anything. (True, that one. I will go to my grave baffled why the dickens Turner Field was erected there, when the old Atlanta-Fulton stadium was in the wrong place already.) Start this debate on an AJC blog and you can watch it descend into nasty race-baiting within eleven replies, while committees debate, impotently, one side blocking the other for imagined political slights decades previously and nothing ever gets accomplished.

In Chattanooga, they shut up, rolled up their sleeves, and got the job done, and they’ve got a world-class aquarium that’s better than ours (which was built later), and an awesome children’s museum that’s better than ours (which was also built later), and a tourist-friendly ballpark that’s up a short hill and feels vibrant, safe and fun. They’re surrounded by shops and restaurants, and ringed by a riverwalk with more tourist attractions, and pedestrians can, and do, cross a bridge in droves to shop in the eclectic and fun North Shore neighborhood where we had stopped for a doughnut several hours earlier. It’s family-friendly, tourist-friendly, local-friendly, environmentally-friendly, and pedestrian-friendly, and one of, if not the very best downtowns that we have ever visited.

On this occasion, we visited to take the baby to the Creative Discovery Museum. At eleven months, there isn’t very much that he can yet do, but they have a fine infant play area for him to crawl and roll around and go down a small “slide,” and lots of toys for him to cram in his mouth in between cleanings and disinfectings. Road trippers like us, with young children, might want to look into a membership at a children’s museum, especially if it is one in the ACM association, which gives reciprocal privileges to something like 150 others, nationwide. It’s a fine way to give your baby a break and time to wiggle around, and for you to let your food settle while the kid plays before moving on to your next destination.

Other blog posts about Hillbilly Willy’s include: