The Friday of indulgence was behind us, and it was time for a simpler pair of meals for Saturday. We had lunch at I Dream of Weenie, enjoyed some goodbye hugs with our awesome host, Tory, and waved goodbye to the Music City again. I always like to leave cities in central standard as early as possible; the time change always messes with my head. We made very good time back to Chattanooga and took a nice detour for our early dinner. It was so early a supper that, four hours later, the girlchild got frustrated with me when I reminded her that we’d already had supper in Tennessee.

Shuford’s Smokehouse was recommended by a reader called Tag back in July 2012. You take exit 178, US-27, north of the city, past the ballpark and all that construction that has shut down two exits, and you get to marvel at these houses on a hill above you on the left that look very much like erosion will be sending the residences tumbling into the chasm below it any day now before you come to the Signal Mountain exit. This is one of those “make way for the Wal-Mart” roads with about nineteen traffic lights in the three miles between the highway and the restaurant. Patience is required.

Jeff Davis opened this place as a little drive-up counter in 1986 and he has expanded and enclosed it to provide some indoor seating. He says that he opened 27 years ago and has been coming to work almost every single day since. He smokes over hickory wood and delivers a completely wonderful plate of pork. This is not the first time this has happened, but we went to middle Tennessee and had some good barbecue, and we went somewhere else and had even better barbecue. A week back, in the first of the seven posts covering this trip, I mentioned Ulika BBQ, a very detailed site that covers Nashville and the surrounding area better than any other, even if the passage of time is wreaking havoc on its accuracy. Ulika BBQ acknowledges in the first of its 21 chapters about Nashville that the city is not known as a barbecue destination, and that it gets lost in discussions dominated by other regions. Well, it certainly doesn’t help matters when out-of-towners like us come in, have one okay-ish meal and one fairly good one, and then go back to eastern Tennessee and get our socks blown off. 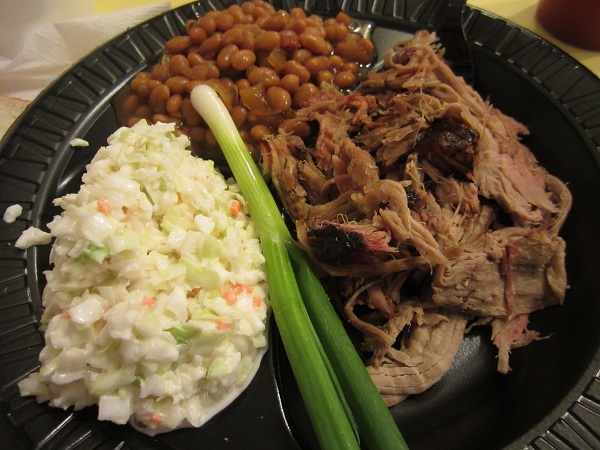 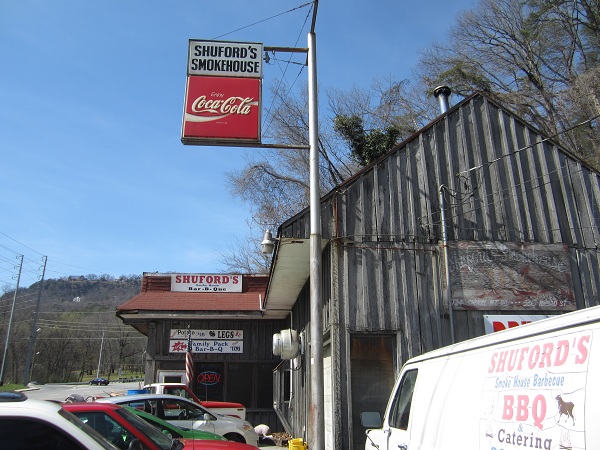 There are certainly some other good places around Hamilton County to get good barbecue, but Shuford’s is my new favorite in the area. This pulled pork is really rich and smoky. So is the sauce, which is a dark, sweet and smoky brew that mixes incredibly well with the meat. I went with baked beans and slaw as my sides and enjoyed them both a lot. I also loved the very cute garnish of a green onion on the plate. Two hundred plus barbecue joints at this blog and I am still being pleasantly surprised by unique little touches like that.

My daughter was unsure what side to get with her sandwich and asked about a tater log, another item new to us. This is a deep-fried baked potato. I’m glad that every once in a while, she’ll smile and try something new. That bodes well.

Shuford’s was still bringing in a good crowd for carry-out orders and people enjoying midday meals like us at three in the afternoon. The parking is a little treacherous, since you have to back right out onto an often-busy four-lane, but otherwise this is definitely a detour worth making. With all respect to the other very good barbecue places that we’ve sampled in this area, this is the best one so far.

The trip home was just a couple of dollars more expensive than planned, so it’s just as well that the prices here are so affordably low. We certainly didn’t want to stop in Chattanooga without visiting the good jerks at Pure Sodaworks. It was a glorious, sunny and warm day – I am writing this installment on the 27th, when it’s 33 degrees and miserable, so it’s amazing to remember that just a week and a half previously it was spectacular – and everybody else in Chattanooga came down to Coolidge Park to play. We couldn’t find a place to park, so I pulled up front and sent in the girlchild to buy some bottles for the fridge and some fountain drinks for the ride. Madly, I forgot to throw our dollar refill mugs in the car, but I didn’t object. Their Apple Pie soda is so darn good that I didn’t mind a bit paying full price for it. Next time, I’ll bring the mugs, though!