This is Marie, contributing a brief article about a place I stopped to eat (and exercise the baby) on my way back from a trip to visit my folks. Anyone who had done road trips with me in the past 20 years may be rather surprised at the hobby I now share with my husband, in that it involves stopping at places and taking routes other than the most direct. However, it was good training for driving with baby, especially since on this trip there wasn’t anyone to take the shift in the back seat for soothing and entertainment. So anyway, Grant was kind enough to suggest one of my stopping point for this journey, Satterfield’s in Macon.

If we get a chance to visit again he will regret having sent me rather than waiting for us to go together. I did not do as good a job as he would of speaking with the staff about the place. I learned that it’s been around since the early ’80s; I learned that the folks there have their own secret recipe for sauce; I learned that the servers there are complete suckers for a cheerful baby. None of those things are terribly surprising. Rather more to the point, however, I learned that they have the most completely amazing potato salad ever. 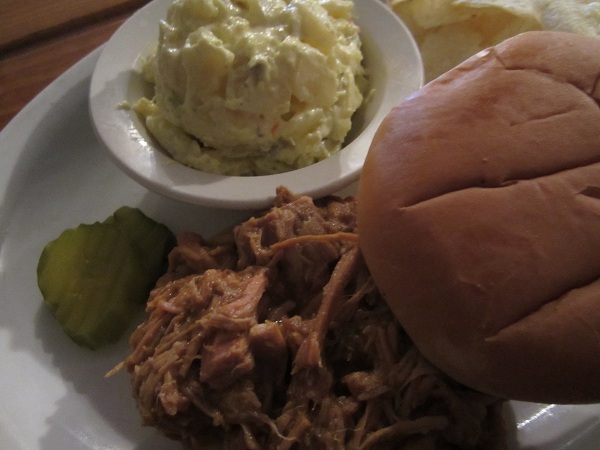 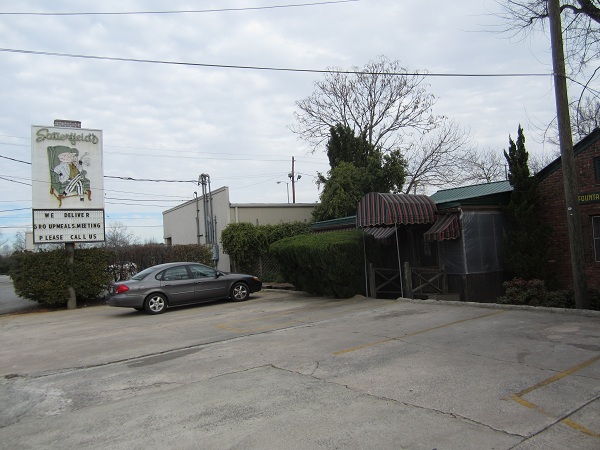 The good thing about the restaurant is really the sides. They do their own french fries, which is generally a sign that the rest of the sides will be good. After Grant’s post about the deep soul-satisfying contentment of eating too much potato salad, I just had to try theirs. I like potato salad with egg and mustard and without a lot of crunchy bits. It was just how I like it, but it kind of overshadowed the sandwich.

The meat comes with sauce already in it, which is fine because it’s quite tasty. Not in the potato salad’s league, but tasty. There is always the possibility that I liked the stuff disproportionately to its value, in that I waited rather longer than I should have for lunch. I’d probably want to try something else on the menu just to see what else they do, but if I lived in the area I’d go pick up tubs of potato salad and eat them secretly in my car like an addict. Anyway, this is a long and rather circuitous way to say that I have mostly forgotten the sandwich. It had a pleasantly mild and slightly sweet red sauce, solidly in the middle of Memphis tradition. Don’t get me wrong – I do remember that I liked it – it was just overshadowed.

There are a few other interesting things on the menu, such as the pimento cheese sandwich. I would want Grant along to critique that, as he likes the stuff more than I do. (Or, possibly, more than anybody else does. –grant)

I also should have tried the Brunswick stew, as that’s a comparison point that we’ve used in the past. It’s more fun to talk over the food while you’re eating it, with someone who speaks English. While Daniel did get a small, pre-mushed bite of the sandwich and appeared to find it quite acceptable, he isn’t the most discriminating of palates and he didn’t say much about it. It’s also possible I was missing Grant a bit by this point. Luckily I was almost home.

Other blog posts about Satterfield’s: