The high point of our trip through the Carolinas came with the seventh stop. We’d enjoyed some pretty good eating experiences along the way, but the most fun and most different pleasure of the tour came at a very famous restaurant in Spartanburg called The Beacon. I had heard this place referred to as similar to Atlanta’s legendary Varsity, but that doesn’t really begin to explain how wild and awesome it is. This is absolutely a place that everybody in the southeast should try at least once.

You’re not going to get high-end cuisine here. This is the place for artery-bursting burgers, fries and onion rings. Ordering a burger “a’plenty” means that your sandwich will come buried underneath a heap of greasy, delicious rings and fries. But just as The Varsity supplements its menu with neat things like pimento cheese sandwiches and barbecue, at the Beacon, you can find some really interesting treats. While Marie, after some hesitation and consideration, settled on a burger, I ordered something I’d never heard of before: a hash burger along with a small cup of chicken mull. Happily, this little obsession of mine, best known around Athens, GA, is very much present here, although termed “chicken stew,” as it is occasionally called when spotted in South Carolina. They’ll even give you a free sample of it. 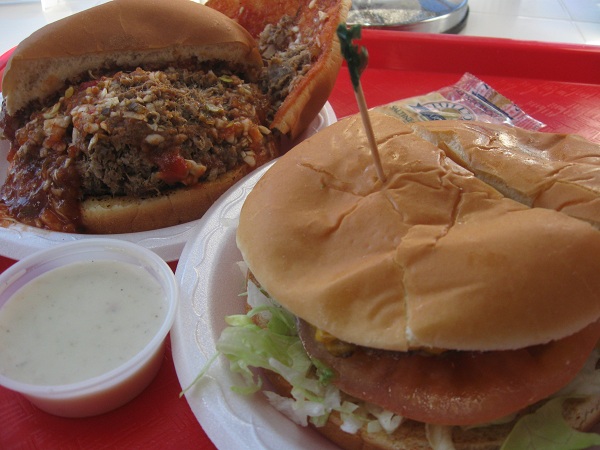 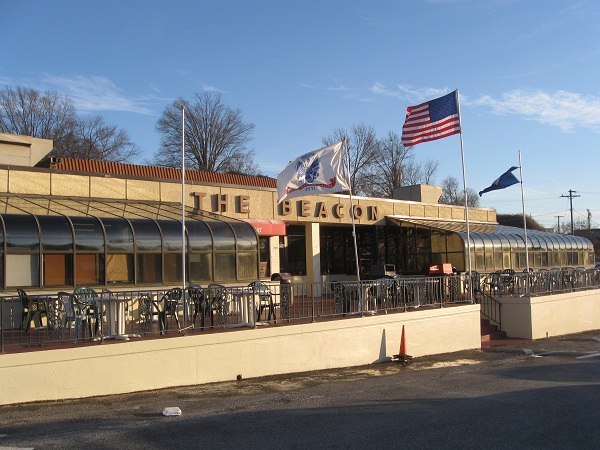 The Beacon’s been around since 1946, and only left its founder’s family’s hands in the mid-nineties. Many of the same long, long-serving employees still work here six days a week. The first one a new guest is likely to meet is JC, who’s been with the Beacon for decades calling out orders. The expectation here is that you either know what you want, or that you’re going to accept the menu that JC hands you and get out of the way until you’ve figured it out.

Marie was overcome by a perfectly understandable sense of fatigue as we pulled into the Beacon’s enormous parking lot. It was almost five and the Saturday supper rush was just about to start. Marie knew that she wanted a burger, but wasn’t sure about much of anything beyond that. So I asked JC whether we could get a menu and stepped back for Marie to look over it.

“What’s the difference between a Beacon burger and a hamburger,” she mumbled to me, barely audible.

JC replied in a holler: “Beacon burger’s got two patties, hamburger’s got one, dressed as you like. What you want on it, darlin’?”

“I don’t… think I need two patties,” said Marie, somewhat untruthfully, as protein and iron were definitely on the evening’s order of business.

“Well, you just get a hamburger, and what you want on it?” he asked. Marie mumbled back a small list of toppings and JC tilted his head back and bellowed her order. Somewhere in the back, a crew, tick-tocking like the finest oiled machine I have ever seen, had her burger assembled in seconds. My hash burger – served with cole slaw on a bun – took not a measure longer. We took a tray and slowly made our way down a cafeteria-styled line, picking up our sandwiches and mull. Drinks awaited us right before the register. The Beacon claims to serve more sweet tea than anyplace else. It’s unbelievably sweet, and comes with lemon added. I learned later that it was the owner who was working the register and, again with the speed of lightning, had our order calculated and my change ready almost before I had my bill out of the wallet. As many people as the Beacon serves, there is no time to mess around.

As for the food, well, the hamburger is not going to win any awards. It’s okay. The hash burger, on the other hand, was incredibly interesting. This was my second helping of hash on Saturday, following the side of hash and rice down at Sconyers in Augusta, and I just loved it. The chicken mull was terrific as well, even better than the gloriously good stuff that they offer at the Butt Hutt in Athens. If this wasn’t an eight-meal overeating day, we’d have had the rings and fries as well, and I’m regretting not giving those a try now. Looking at the giant, greasy pyramids on our fellow guests’ tables, I was craving them, but figured I had done about enough damage to my system by this point.

Looking around, it’s easy to find some negative reviews of the Beacon out there. Maybe it is not as good as it once was, and maybe the decades of grease have taken a toll on the tile floor, but this place is a sensory overload of an experience, and instantly one of my favorite places. I can’t wait to try it again, and get some more of that mull and some of those rings, the sooner the better.

2 thoughts on “The Beacon, Spartanburg SC”