When we first visited the Beacon in February of last year, we were a bit overwhelmed by just how huge, wild and chaotic it was, and that’s despite very old familiarity with Atlanta’s similar Varsity. The spectacle of the Beacon makes for a real experience, and we could not wait to get back and give it another try.

It’s only about forty minutes’ drive from Henry’s Smokehouse in Greenville, and after the rain eased up a little, we got back on US-29 and enjoyed the ride. Google Maps suggested Terrace Road as a quick shortcut over to John B. White Sr Boulevard; if it ever does this for you on your own road trip, pass. The resulting left turn to get to the Beacon is blind and dangerous. The food here’s good, but take a few moments and get there safely, please! 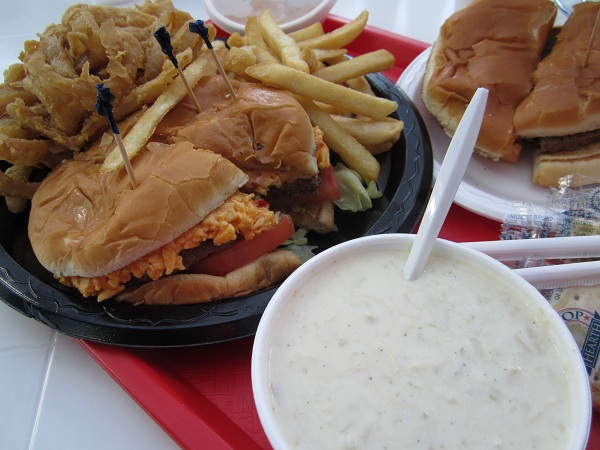 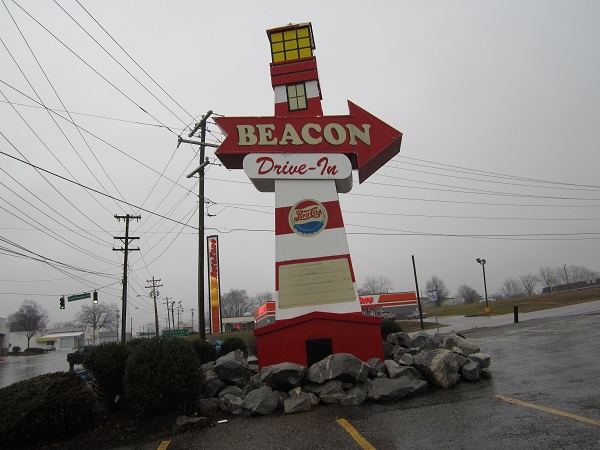 Now, on the previous visit, we arrived a little tired and immediately hit sensory overload with the wildness of this place. This time, we sensibly took a moment and looked over the menu at a discreet distance before approaching the counter. Guests need to know what they want before they step up to meet J.C. and have their order called out. You talk and walk. Ideally, from the moment that you finish speaking with J.C. and he bellows out an order to the clockwork-like crew ticking and tocking and flipping burgers, you should not need to stop moving, collecting additional foods and drinks – the sweet tea is, with good reason, legendary – until you get to the register.

Surprisingly, we stumbled upon one of the very few times when this machine-like precision breaks down a little. Nobody was available at the station where you can either take a little shot glass sample of chicken stew – or mull, about which, more in the next chapter – and so I wasn’t able to ask for a small bowl until we were down the line a little ways. The delay, in my terms, was infinitesimal and, in any other place, not worth a mention. But with the amount of care, focus and attention on moving guests along, to have things stop for the twelve or fifteen seconds that it took to get my order caused a bizarre logjam behind us that took a couple of minutes to untangle. I was just amazed and impressed watching everything unfold.

The food is not extraordinary, but it’s really neat. I ate reasonably lightly at our first two stops, planning to indulge here. The trick is to order your burger, dressed as you like, “a’plenty,” which means that it comes buried – absolutely buried – underneath a towering peak of onion rings and fries. Sensible couples or groups need only order one “a’plenty” for the table, as there are considerably more than enough to share. I was impressed that the resulting mess was not quite as greasy as I was led to believe. Don’t get me wrong; it is certainly a gigantic and unhealthy pile of fried food, but the rings, in particular, are nowhere as greasy as the Varsity’s. The breading is soft and, while the two of us were unable to finish the mountain, we enjoyed it. The bowl of mull was just fabulous; while not the best, it’s still better than a couple of places around Athens that offer it.

It should not surprise readers following this road trip to learn that I had a pimento cheeseburger. Taste-wise, it was the least of the three that I enjoyed that day, but it had the most cheese on it, by far. There was darn near a solid inch of the stuff atop my hamburger patty. It had not melted much, which did not surprise me, as food served piping, scalding hot isn’t really the order of business here, and it would take an awfully hot hamburger patty to melt that much cheese anyway.

One day, we might get a chance to visit the Beacon when we’re not in the middle of a food tour, and we’ll get the opportunity to linger a little longer and check out the treats at their dairy bar. I figure that it’s only about six minutes off I-26, and should we be in a position to use that interstate in the future to get from Asheville to Saint Simons as we dream, we’ll be eating here many, many times to come. As long as our arteries can stand it, anyway.