For the second stop on our South Carolina trip, we hopped just a few streets over from the Northgate Soda Shop to get some barbecue at Henry’s Smokehouse. Their location on Wade Hampton Boulevard, US-29, is the original. They have, in the 25 years since it opened, spun off two additional locations. One of these, in nearby Simpsonville, was noted in Playboy in the summer of 2002 as the country’s best barbecue restaurant. I use “in” rather than “by,” as the notice came via an advertisement for Mini Cooper laid out in the style of the magazine’s “Party Jokes” page, and so it might not be editorially accurate to state that Playboy itself made the claim. You can get that magazine yourself and check me on that. It’s whatever issue that summer that had Dalene Kurtis on the front cover. She might be fairly accused of distracting a fellow from remembering which month.

At any rate, you probably came to read about barbecue, and not necessarily distracting blondes. Henry’s is in a very neat older building with huge windows, and not very much room for many diners. When we arrived, it was raining, and as we ate, it started pouring buckets, so we had plenty of time to consider our meal.

In anticipation of the gorging to come, about thirty miles down the road, we ate very lightly here, and simply shared a chopped pork sandwich and an order of hash over rice. 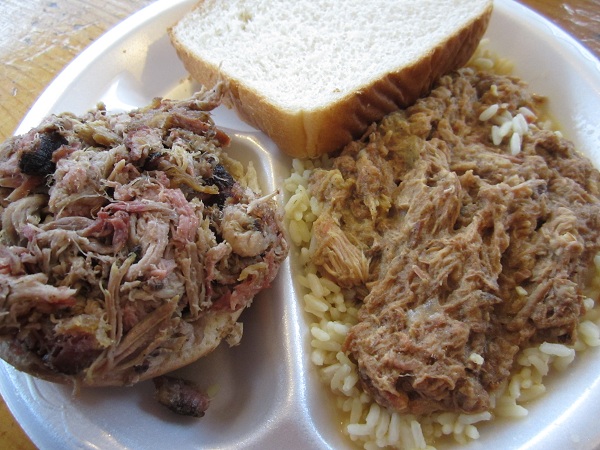 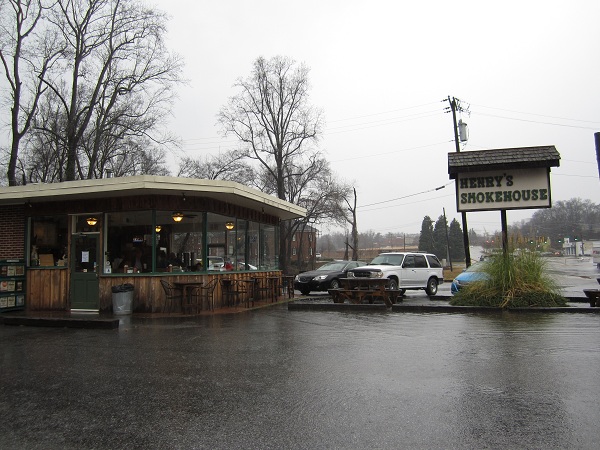 Honestly, this isn’t the best barbecue around. It’s not even the best barbecue in South Carolina. But it’s still very good, and really worth a stop. Maybe it’s because, for some reason or another, we haven’t gone out for barbecue very much lately, but I really enjoyed the texture of the pork, and it was just moist enough and pleasantly smoky. There is a sweet tomato-based sauce and a spicy mustard-based sauce, and both were very good.

The hash was also very good here, although the staff would not be budged in hinting what was in it. I was pleased that this restaurant, like very few others, offers both hash and stew. If you’re unfamiliar with this dish, imagine, if you can, a meat gravy, served over plain white rice. It is a fine side for a plate or a pork sandwich.

As I mentioned above, we lingered in Henry’s for quite some time after finishing, waiting for enough of a break in the rain to transport ourselves and the baby back to the car and stay reasonably dry doing so. I fear that we failed in our “job” as bloggers to spend more time actually talking to the staff about their place as we just enjoyed each other’s company while the rain poured down instead. I’ll leave it to somebody else to come behind us and do better. Places this good should be documented a little better.

Actually, the whole Greenville/Spartanburg/Anderson area definitely needs better coverage from hobbyists like me. Just driving around town up US-29 on our way to our next destination, we saw all sorts of interesting places. If you’re like me, and curious about regional chains that have left the Atlanta area, you might be interested to know that both Pizza Inn and Sub Station II, which failed here and have long ago left this market, still have footprints in Greenville and Greer. Most people, of course, aren’t much like me in that regard, but might be more interested in the barbecue, with, according to Urbanspoon, dozens of open restaurants in that category, or the drive-ins. There’s a small chain of drive-ins called Clock that sounds incredibly interesting, and a fantastic-looking place in Spartanburg called Sugar & Spice which called to us as we passed, not to mention Ricky’s. There looks like an awful lot to eat in this town. We’ll need to come back.

Other blog posts about Henry’s: